Unlike most of the nascent fields featured in this exhibit, obstetrics and gynecology spent most of the early 19th century in a state of general stagnation.1 Except for the vaginal speculum, which went through several major iterations from 1801 to 1850, new technologies in these fields were slow to develop. Due to persistent taboos marking midwifery as 'women's work' (and more general taboos surrounding the handling of female genitalia by men), many male doctors eschewed these fields. Babies had been delivered almost exclusively by women for most of history—and, for most of history, women had been denied access to degree-granting medical institutions.2 However, some female midwife-obstetricians, like the inventor of the bivalve speculum, Marie-Anne Boivin, still earned recognition for eminent careers.3 A tradition of medically-trained male midwives called accoucheurs also existed in France from about the 17th century.4

In the second half the century, three Parisians delivered obstetrics into a new era. The first, Etienne Stephane Tarnier, observed that maternal mortality was a staggering thirteen times higher in hospital births than in home births; at the time, puerperal fever—perinatal uterine infection—was killing up to one in six women at the Maternité Port-Royal, where Tarnier worked. Tarnier correctly concluded that infections were being transmitted throughout the hospital via unwashed hands and shared linens, and instituted new hygienic practices which dramatically reduced maternal mortality.5 Over the course of a revolutionary career, Tarnier designed a new forceps (c.1877) which followed the pelvic curve, making them less injurious to both mother and child, and introduced the first closed, insulated incubators for premature infants (c.1881).6 One of Tarnier's students, Pierre Budin, helped lower the infant mortality rate in Paris by demonstrating the importance of supporting new mothers with access to professional care and up-to-date information; he maintained relationships with his patients after they had given birth (not a common practice at the time), conducting weekly examinations and infant weigh-ins at the neonatal clinic he established in 1892.7 Another of Tarnier's students, Adolphe Pinard, invented an obstetric stethoscope and laid out guidelines for cephalic version, a procedure for manually coaxing a fetus out of breech position.8 Also in the late 19th century, new types of gynecological surgeries were explored, particularly for the repair of vesicovaginal fistulae and the removal of ovarian and uterine cysts, fibroids, and tumors.9 Hysterectomies were occasionally performed in the 19th century but were usually fatal, especially before antiseptic practices caught on in the 1880s.10 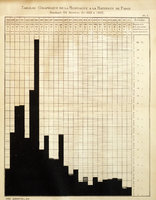 A bar graph showing maternal mortality rates in a Parisian maternity ward from 1858 to 1883.  According to the author, antiseptic practices were introduced in 1873 but were not applied "in a serious manner" until 1882. 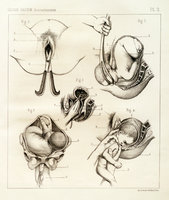 Guiding a fetus out of the vaginal canal with forceps (Figures 1 and 2) and with the hands at the beginning and end of an internal version maneuver (Figures 3 and 4). Figure 5 shows manual removal of a retained placenta. 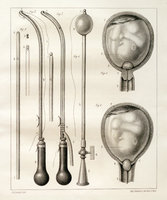 Inducing labor using a dilator, circa 1863.  The author of this thesis describes a case in which he induced early labor at about 8 months in a woman whose pelvis and femur bones were somewhat deformed by rickets, which would have made the delivery of a full-term baby difficult.

Speculums, circa 1873. All the specula shown were designed by male doctors, although French midwife Marie Anne Boivin deserves most of the credit for the invention of bivalve speculum.

Paul Budin's thesis includes studies of head deformation in newborns. Some head deformation is normal due to the pliability of the fetal skull and the pressure it undergoes in the birth canal. This illustration, a case Budin observed in 1875, shows the (sadly fatal) way a pair of abnormally-presenting twins became trapped by the pelvic bone during birth. 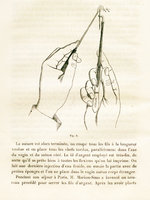 A groundbreaking surgical method for the repair of vesicovaginal fistulas, first performed in 1849 by American gynecologist J. Marion Sims. He remains and controversial figure, having made his historical advances in gynecology by performing unanesthetized, experimental surgeries on enslaved women.11

When a late-term fetus died in the womb, an embryotomy (destruction and extraction of the fetal corpse) sometimes had to be performed for the safety of the mother. In the 19th century, this was considered safer than performing a caesarean section; in the 21st century, the opposite is true.

Figures from a thesis on assorted cysts, tumors, and fungal infections of the uterus.  Figure 1 shows a cross-section of a uterus with a massive epithelioma blocking its neck. Figures 2 and 5 show a collection of cervical polyps. Figures 3 and 4 show Nabothian cysts in the cervix.

Anatomy of a developing fetus, circa 1878.

Anatomy of the ovaries and uterus. 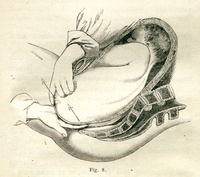 Using the hands and forceps to deliver a fetus in breech position, circa 1882. 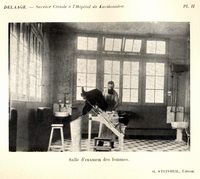 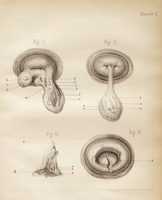 Follicular cysts on the ovaries. 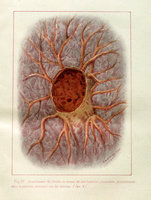 The placenta at the point where the umbilical cord was violently torn from it during an unusual delivery. According to the thesis, the cord was torn by the baby's fall after the mother gave birth over a squat toilet; mother and child were released from the hospital 10 days later in good health with no complications. 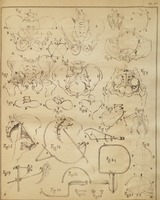 These figures show the use of pelvimeters (instruments for measuring the female pelvis) to determine whether there is a relationship between pelvic alignment and menstrual difficulties. 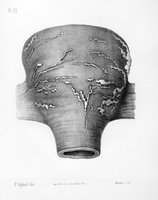 The uterus of a patient whose abscess has been unsuccessfully treated with an injection of mercury; the lymph network on the organ's surface is distended with mercury and pus.

In cases of uterine hemorrhage, this cone-like device was designed to be inserted through the vagina and then used to put evenly-distributed pressure on the walls of the uterus, circa 1814. 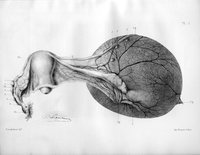 Picture of a uterus and its annexes with a large cyst developing on the left side. Blood vessels are distended on the surface of the cyst.

A congenital malformation aptly called a double uterus (uterus didelphys). The condition rarely causes problems until a pregnancy occurs, in which case extra care and caution should be taken. 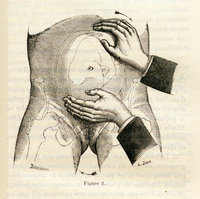 External cephalic version, a procedure sometimes used to move a fetus from breech position to the normal head-down position.

Repairing a vesicouterine fistula, an abnormal passage formed between the uterus and the bladder, which is sometimes a complication of caesarean section.