The study of the brain is as old as Hippocrates, but neurology as a science and as a clinical field was born in the 19th century. The manufacture of new and newly precise instruments for physical examination, surgery, and autopsy enabled doctors to make direct connections between behavior and the brain, and between reflex actions and the nerves.1

While the foundations of neurological localization were laid by Antoine Laurent Bayle and Paul Broca (namesake of the brain's language center), it was Jean-Martin Charcot who popularized the idea that behavioral abnormalities in a living patient could be traced to anatomical defects or 'lesions' in particular parts of the brain.2 With frequent collaborator Alfred Vulpian, Charcot described the pathological anatomy of a whole catalog of nervous system disorders and mentored most of a generation of French neurologists and psychiatrists, including Joseph Babinski, Pierre Janet, Pierre Marie, Jules Cotard, and Georges Gilles de la Tourette, ensuring that his influence remained pervasive long after his death in 1893.3 Charcot's school believed that most neurological illness, including hysteria and neurosyphilis, were chronic and hereditary.4 During WWI, French soldiers exhibiting symptoms similar to what today's doctors call PTSD were often diagnosed with hysteria or accused of malingering; neurosurgeon Clovis Vincent pioneered electroconvulsive therapy for such 'hysterical' soldiers.5 Neurologists Jean Georges Guillain, Jean Alexandre Barré, and André Strohl (the same team to name the autoimmune disease Guillain-Barré syndrome)6 manned a military neuropsychiatric center during the war.7 French neurology also fed contemporary European ideas about la dégénérescence or 'degeneration,' the theory that society was in continual decline because criminal tendencies were passed down genetically. Proposed by Parisian doctor Bénédict Morel in 1857 and later popularized by philosopher Max Nordau, la dégénérescence permeated the late 19th and early 20th century scientific world, influencing psychiatry, anthropology, criminology, and, eventually, the eugenics movement.8 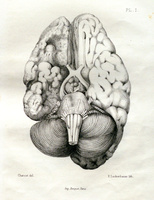 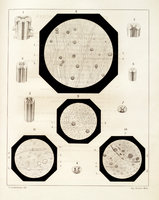 Microscopic examination of spinal tissue from a patient diagnosed with progressive locomotor ataxia. They show amyloid bodies, which are associated with neurodegenerative disease.

Patient with progressive locomotor ataxia, a neurological condition now known to be a manifestation of neurosyphilis. Signed at bottom left by Paul Richer, medical artist at the Salpêtrière.9

An attempt to identify lesions on the specific areas of the brain that caused a patient's hemiplagia and hemichorea. The author notes that mercury poisoning was involved.

Diagram of the right hemisphere from the thesis of Fulgence Raymond, who was chair of neurology at Paris from 1874 to 1910. 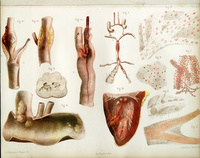 Charcot, who was deeply involved in studying cerebral softening and apoplexy, chaired Poumeau’s committee on a thesis that delves into the subject.

The hands and nervous system lesions of patients with paralysie agitante, or Parkinson's disease, from the thesis of one of Charcot's students.

The leftmost figure shows cerebral hemorrhage in a concussed human brain. Other figures show traumatic injuries in the brains of dogs.

Abnormal hand positions (some neurological, others not). Diagnoses include: atrophy (Figure 2); paralysis (Figure 10); osteomalacia (Figures 3 and 4); permanent hysterical muscle contraction (Figure 9); "monkey hand," a condition in which the thumb cannot be moved away from the hand (Figure 1); benediction hand (literally "emphatic preacher hand"), an effect of median nerve injury (Figure 6 and 7).

Charcot's own illustrations for his thesis show the hands of patients with gout, a form of arthritis characterized by swollen, inflamed joints.

"Hysterogenic" or "erotogenic" zones, areas of the body believed by Charcot to be particularly involved in hysteria, either as sites of pain or potential catalysts of paroxysmal attacks. 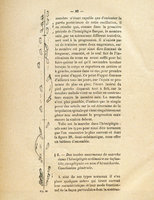 For his thesis, under Charcot's direction, Gilles de la Tourette (namesake of the tic disorder Tourette's syndrome) analyzed the gait of neurologically normal and abnormal patients by having them step in ink and walk across a long sheet of paper.10 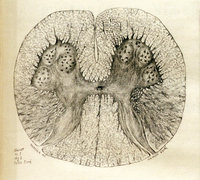 Cross-section of the spinal cord in a patient diagnosed with tabes dorsalis. 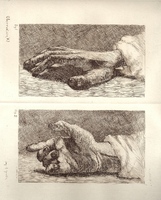 This etching shows atrophy of the hand brought on by lesions to the ulnar nerves.

The superior longitudinal (or sagittal) sinus, in blue, drains blood away from the brain. 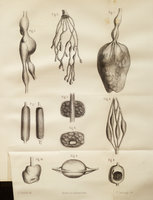 Thesis from 1852 on nerve tumors. Fig.1 shows a fibroplastic tumor of the sciatic nerve sheath; Figs.5&6 show a cancerous tumor of the external popliteal nerve. 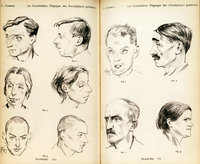 Patients diagnosed with paralysie générale or "general paresis or the insane," a term used in the late 19th and early 20th centuries to describe the psychiatric and neurological aspects of neurosyphilis. Symptoms included dementia, paranoia, and a host of neurological and motor problems.

Skulls exhibiting characteristics of microcephaly, the condition of having a smaller-than-normal head. These drawings were made from skulls held in the private collections of French phrenologists Franz Joseph Gall, Pierre Marie Dumoutier, and Emmanuel Patrix. The pseudoscience of phrenology could be called a precursor to scientific neurology.11 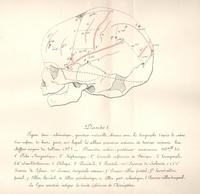 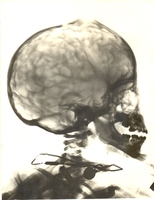 Children suffering from craniostenosis, or premature fusing of the skull plates, circa 1969.

Cerebrospinal abnormalities observed by the author, many of which are complications from tuberculosis or Pott's disease, circa 1834. 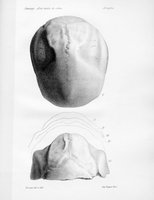 Senile atrophy of the skull. 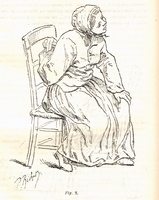 An epileptic woman's body contorts during a seizure, circa 1883.

A patient of Charcot's diagnosed with 'trifacial' or trigeminal neuralgia, a condition involving muscle spasms and pain in the face around the trigeminal nerve.

Diagram of the furrows in an orangutan brain, from an 1874 comparative study of human and simian brains.

Granulations in the meninges causing blain inflammation, circa 1853.