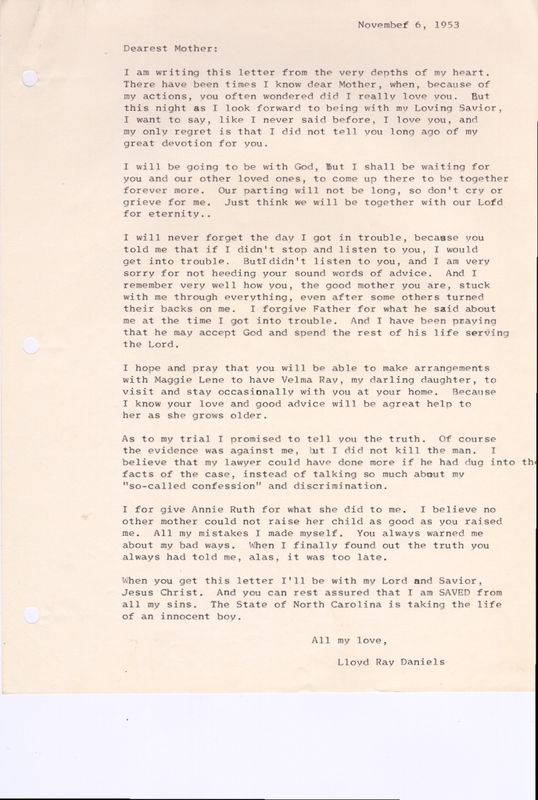 1953: Lloyd Ray Daniels to his mother 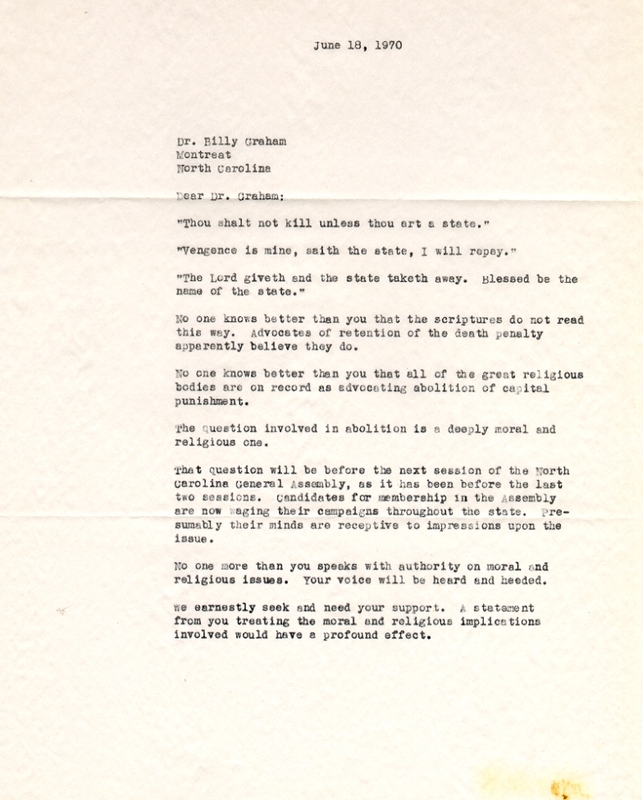 Genesis 9:6 reads, "Whoever sheds the blood of man, by man shall his blood be shed; for in the image of God has God made man." In Matthew 5:38-39, Jesus says, in the Sermon on the Mount, "You have heard that it was said, 'An eye for an eye and a tooth for a tooth.' But I say to you, do not resist an evildoer. If anyone strikes you on the right cheek, turn to him the other also."

These passages suggest the range of views pertinent to capital punishment in one religious text, the Bible. The complexities involved are compounded when one notes that passages such as these often are taken out of their full context, leading to questionable applications in arguments both for and against the death penalty. Multiple views on the death penalty arise from other traditions as well. Religious scholars from many of the world's major religious traditions (Islam, Judaism, Buddhism, Hinduism, and others, as well as Christianity) have expressed varying interpretations of their faiths' perspectives on the matter.

Capital punishment is a criminal, philosophical, social, and often cultural issue. But, for many on both the pro- and anti-death penalty sides, it can be a predominantly religious issue. The link seems natural as capital punishment deals with great existential questions: life and death, morality and sin -- all issues which religion tries to comprehend and explain. North Carolinians have long struggled to apply their religious beliefs to the state's practice of capital punishment.

Confession, repentance, and salvation were associated with executions from their earliest days in North Carolina. Authorities, later including chaplains, and the media often reported that criminals had asked for forgiveness in the face of their impending deaths. Many condemned prisoners also pled with those they were leaving behind to lead virtuous lives so as to avoid their unhappy fate. For many, the religious context of executions finally included a sense that the person executed was rehabilitated in death and saved in Heaven. Guilt was ultimately erased for everyone, including society.

The late-nineteenth and early-twentieth centuries saw vigorous religiously based arguments concerning the death penalty in North Carolina. Death penalty abolitionists were generally more successful in formally organizing their movement around religious views, though religiously motivated retentionists also spoke out forcibly. In the 1920s and 1930s, a group called the North Carolina Society for the Abolition of Capital Punishment was formed with Universalist minister Henry Lee Canfield of Greensboro as its first president. The group organized lectures and speeches in churches and a network of Bible studies in its campaign to convince the faithful to oppose capital punishment. A second group, North Carolinians Against the Death Penalty (NCADP), was formed in the 1960s as a Christian legislative lobby group. From 1964 to 1971, its most active years, the organization was headed by Marion Wright and included other important state leaders, such as Pulitzer Prize-winning dramatist Paul Green. NCADP supported legislative bills for abolition of the death penalty at the biennial sessions of the North Carolina General Assembly of 1963, 1965, 1967, 1969, and 1971. In more recent years, North Carolina has been home to the national organization People of Faith Against the Death Penalty (based in Carrboro). The group focuses its programs on organizing for abolition among faith communities in the South, including coordinating vigils at each execution at Central Prison in Raleigh.

Controversy also has surfaced because of the religious beliefs of individual condemned inmates. Perhaps the most notable example of this in North Carolina is Velma Barfield. Barfield was convicted in 1978 of the poisoning murder of her boyfriend, Stuart Taylor. After her conviction, she confessed to three more murders, including the poisoning of her elderly mother. In prison, Barfield became a born-again Christian and fellow prisoners reported that she spent much of her time during her six years on death row counseling and offering spiritual guidance to other female inmates. Her conversion to Christianity attracted the attention of evangelists Billy and Ruth Graham. The Grahams, and others, assisted Barfield with appeals to Governor Jim Hunt for commutation of her death sentence on the basis of her religious conversion. The appeals were denied and she was executed on 2 November 1984.