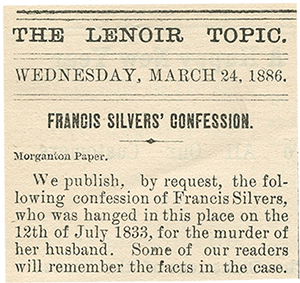 One of the few certainties about Frankie Silver is that she was hanged for the murder of her husband Charlie in Morganton, North Carolina, on July 12, 1833. Many of the other facts surrounding their married life, the murder in 1831, the reasons for the crime, and the drama leading up to Frankie's death are shrouded in 170 years of myth and folklore. The story has been told in ballads, "true-crime" magazine articles, plays, ballets, books, essays, documentaries, and countless newspaper articles. The story continues to hold the imagination of many.

According to the most common version of the story...

Frankie killed Charlie in a fit of jealous rage three days before Christmas 1831. She suspected him of infidelity with another man's wife and decided to exact her revenge as he lay sleeping on the floor with their baby girl. Quietly removing the child from his arms, she then struck Charlie's head with an axe. The first blow, however, did not immediately kill him and he thrashed around the house mortally wounded. Frankie hid under the covers of their bed, eventually coming out when she heard his body hit the floor. She then took another swing with the axe, this time completely severing his head. Frankie attempted to conceal the evidence of the murder by chopping the body into pieces and burning them in the cabin's fireplace. Following this all-night affair, Frankie went to a relative's house the next morning to announce that Charlie had gone hunting and had not returned.

A search of the frozen river and surrounding countryside did not locate Charlie. A distressed Silver family brought in a slave "conjure man" from Tennessee to divine the location of Charlie. Using a glass ball dangled from a piece of string, the conjure man determined that the missing man was still in his cabin. A thorough investigation of the home and surrounding area revealed bits and pieces of charred bone, a heel iron from Charlie's shoe, and a pool of dried blood under the puncheon floor. Frankie was immediately arrested.

Frankie was tried, convicted, and sentenced to die by hanging. After a failed appeal to the North Carolina Supreme Court, she broke out of jail with the help of her family. The sheriff and his posse eventually caught up to Frankie, who was disguised as a man and walking behind her uncle's wagon. She was returned to prison and her execution was set for July 12, 1833.

When the day arrived, she was led to the scaffold. The sheriff asked if she had anything she wanted to say. Before she could answer, her father yelled, "Die with it in ye, Frankie!" However, she told the sheriff that she did have something to say, but she wanted to sing it instead. After she finished her lonely ballad, the noose was placed around her neck, and she became the first woman to be hanged in North Carolina.

How much of the Frankie Silver legend is true? No one is quite sure. According to recent research, only a few of the commonly accepted bits of the story can be told with certainty. Charles Silver was murdered sometime before Christmas in 1831. After a search of the home, evidence indicated that Frankie had committed the crime with the possible help of her mother and brother. All three were arrested, but only Frankie was indicted for the murder. On March 30, 1832, Frankie was found guilty. The case was immediately appealed to the North Carolina Supreme Court, but the appeal failed. Frankie was to be executed during the county court's 1832 fall term.

The fall term came and went without the judge showing up, so Frankie was spared until the spring of 1833. At that session of court, the judge sentenced her to die on June 28, 1833. On May 18, however, she escaped from the jail in Morganton, only to be caught in Rutherford County and returned to prison a few days later. As the date grew near, the governor postponed the execution for two weeks, but petitions to save her life failed and on July 12, 1833, she was hanged in Morganton.

The legend that Frankie sang a ballad at the gallows, confessing to the crime, has also been disputed. The song, "Frankie Silver's Confession," has been re-published, retold, and kept alive over the years by local storytellers, historians, and journalists. However, this "Confession" was not penned (nor sung) by Frankie Silver after all. After several lengthy investigations by historians into the origins of the song, a consensus has emerged that it was written by a man named Thomas W. Scott, a school teacher who lived in Morganton at the time of the execution.

Frankie's tale--fact or legend--continues to inspire storytellers. From Sharyn McCrumb's novel The Ballad of Frankie Silver (1998) and a Swiss dance company's ballet by the same name (1996), to William Gregg and Perry Dean Young's play Frankie (2001), the legend lives on.

This biography of Frankie Silver is reproduced from the series "This Month in North Carolina History", courtesy of the North Carolina Collection in Wilson Library. Text by Jason Tomberlin (2004).

The Ballad of Frankie Silver: Reflections on a Murder: With an Epilogue, The Making of a Ballad Singer[videocassette]. Directed by Tom Davenport; Produced by Dan Patterson, Beverly Patterson. Delaplane, Va.: Davenport Films, 1990.