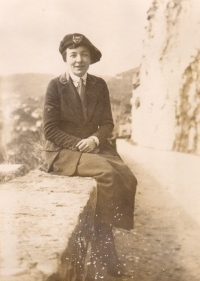 Nell Cornelia Battle Lewis (1893-1956) was a journalist, feminist, lawyer, educator and a strident human rights advocate in Raleigh, N.C., in the early twentieth century. Nell Battle Lewis was born into a family deeply-rooted in the history of North Carolina. Her ancestors included an early landholder in the colonial Carolina settlement, the secretary of the Edenton Tea Party preceding the American Revolution, and an early member of the North Carolina Supreme Court. Nell was the daughter of Richard Henry Lewis, a well-known physician and public health pioneer, and Mary Gordon of Charlottesville, Va. She was named for her father's first wife, Cornelia Battle.

Nell Battle Lewis briefly attended St. Mary's College in Raleigh and graduated in 1917 from Smith College in Northampton, Mass., where she was elected to Phi Beta Kappa. In 1918-1919 she served in the YWCA's canteen service with the American Expeditionary Force in France. Upon her return to the states she soon began working as a newspaperwoman on the staff of the Raleigh News and Observer. In 1921 she began writing an editorial column called "Incidentally." Except for a brief leave of absence due to illness in the 1930s, she remained on the staff of the News and Observer until her death in 1956. Each week, Lewis used "Incidentally" to provide analyses of such topics as: women's political, legal, and educational rights and opportunities; working conditions of laborers, especially women and children; academic freedom and separation of church and state; criminal justice and penal reform; and mental health.

It was through her writings that Lewis became a leader in the death penalty abolition movement in North Carolina. Lewis frequently challenged the use of capital punishment in the state, pointing out especially the racial disparities inherent in the practice. Lewis also assumed a direct role in penal reform when, in the 1920s, she became publicity director for the State Board of Charities and Public Welfare under the administration of Commissioner Kate Burr Johnson. In 1929, Lewis edited a special bulletin published by the State Board called "Capital Punishment in North Carolina." The bulletin was a landmark study of the capital system in North Carolina (the first of its kind in state history) that included 26 individual case studies of death row inmates, analysis of the racial and socio-economic makeup of all prisoners on death row from 1909-1929, and a comprehensive history of the death penalty in the state.

Later in her life, Nell Battle Lewis's political views became increasingly conservative. This was most evident in the years following World War II, when she renounced many of her earlier efforts for freedom of expression and thought, social justice, and reform. She raged against communism in her column. Lewis even launched an attack on many of her old "liberal" friends - particularly Frank Porter Graham, former president of the University of North Carolina. Her actions in her later years earned her the nickname "Battling Nell." However, through this period of her life Lewis remained consistent with her advocacy of penal reform and in her concern for mental health. Nell Battle Lewis died of a heart attack in Raleigh, N.C., on 26 November 1956.