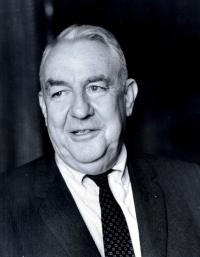 Samuel James Ervin, Jr., was born on 27 September 1896, the fifth of the ten children of Samuel and Laura Ervin, in Morganton, N.C. After graduating high school in 1913, Ervin attended the University of North Carolina in Chapel Hill between 1913 and 1917. In the spring of 1917, Ervin volunteered for military service in World War I, a month prior to his graduation from the University. Ervin spent 18 months in France serving with the American Expeditionary Force. He was awarded the Silver Star, the Distinguished Service Cross, the Purple Heart, and the French Fourragere for his courageous service.

Ervin is best remembered for his service in the United States Senate from 1954 to 1974. During his distinguished Senate career, Ervin was a key member of the Senate Judiciary Committee, and famously chaired the Senate Select Committee on Presidential Campaign Activities (the Watergate Committee). He also sponsored or supported several key pieces of legislation involving criminal law. These bills included the Criminal Justice Act of 1964, which provided legal counsel for indigent defendants, and the Bail Reform Act of 1966, which allowed defendants who could not afford bail to be released from custody pending trial.

Sam Ervin's approach to capital punishment sometimes seemed complex, especially earlier in his career when he was dealing with individuals facing the death penalty, though later in his life it was quite straightforward. He always supported capital punishment per se. Ervin engaged the issue in various ways as he served on various levels and in various branches of government.

In 1926, Ervin was the court-appointed defense attorney for Arthur Montague, a black man who was accused of (and later convicted and executed for) breaking into the North Carolina School of the Deaf in Morganton and raping a 12-year-old white girl. Ervin appealed the ruling, feeling that he should make sure that "all that could be done was done," a decision that drew criticism from his peers. Ervin paid for the appeals out of his own pocket, saving the state the expense. Later Ervin was retained to help prosecute a man named LeRoy Jackson who was charged with murder. Jackson was convicted and later executed for the crime. In the 1930s, as a Superior Court judge in Burke County, Ervin ruled on two murder cases in which the defendant was sentenced to death. He took the unusual step in those cases of requiring the appointed counsels to appeal his rulings to the state Supreme Court.

Much later in his career, during the four-year national moratorium on the death penalty brought about by the U.S. Supreme Court's ruling in the Furman v. Georgia case, Senator Ervin co-sponsored a bill to reinstate capital punishment in the United States. The documents presented here all relate to that episode.

27 March 1973: U.S. Senate Bill S.1401
Senator Ervin co-sponsored this bill, intended "To establish rational criteria for the mandatory imposition of the sentence of death..." by federal courts in cases of murder and treason. It was proposed in response to the Furman v. Georgia decision. 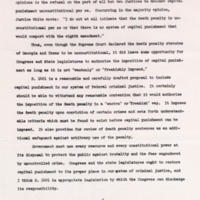 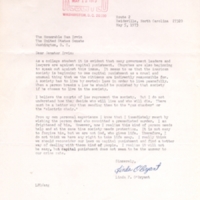 5 May 1973: Letter from Linda F. O'Bryant, Reidsville, N.C., to Senator Sam Ervin
After the Furman decision, while executions were halted nationwide, constituents and others contacted Senator Ervin with their opinions about capital punishment. Ms. O'Bryant, a college student, argues that "capital punishment does not seem to be the answer to our crime rate," and that a murderer "needs help and at the same time society needs protection." Ervin responded that he believed that capital punishment should be retained as a deterrent and that, to this end, he supported Senate Bill S.1401. 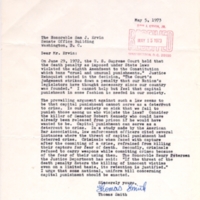 5 May 1973: Letter from Thomas Smith, Hudson, N.C., to Senator Sam Ervin
Mr. Smith takes the position on capital punishment opposite Ms. O'Bryant's, arguing that the death penalty should be imposed as a deterrent and "that some national, uniform bill concerning capital punishment should be enacted." Ervin responded substantially as he did to Ms. O'Bryant. 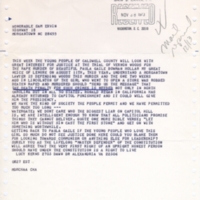 23 November 1973: Mailgram from Lucy Kerns, Alexandria, Va., to Senator Sam Ervin.
Ms. Kerns writes to Sen. Ervin as a supporter of the death penalty with a relative who has been raped and murdered. She argues that if young people in North Carolina "do not see justice done...could you blame them for looking toward Communism or anything else for leadership?" She appeals to Ervin as "the lifelong 'Master Defender' of the Constitution." 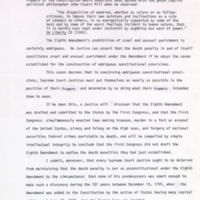 Ca. 1983: Pages from typed draft of "Preserving the Constitution: the Autobiography of Senator Sam J. Ervin, Jr."
This text is from a chapter titled "Illustrative Judicial Aberrations." Ervin, the former judge and N.C. Supreme Court justice, argues that the decision inFurman v Georgia was flawed in that the majority did not rightly consider the intent of the framers of the 8th amendment to the Constitution. He further suggests that each justice in the majority should have been deterred by noting that "none of his predecessors was smart enough to make such a discovery [that capital punishment constitutes cruel and unusual punishment] during the 181 years between December 15, 1791...and June 29, 1972." Ervin goes on to condemn "activist" judges, and to suggest that death is a proper punishment for inflicting death, and that capital punishment does deter at least in the sense of preventing any further crimes by the executed. He joins Walter Clark, one-time chief justice of the N.C. Supreme Court, in declaring that "Enough has been done for those who murder; it is time to do something for those who do not wish to be murdered."