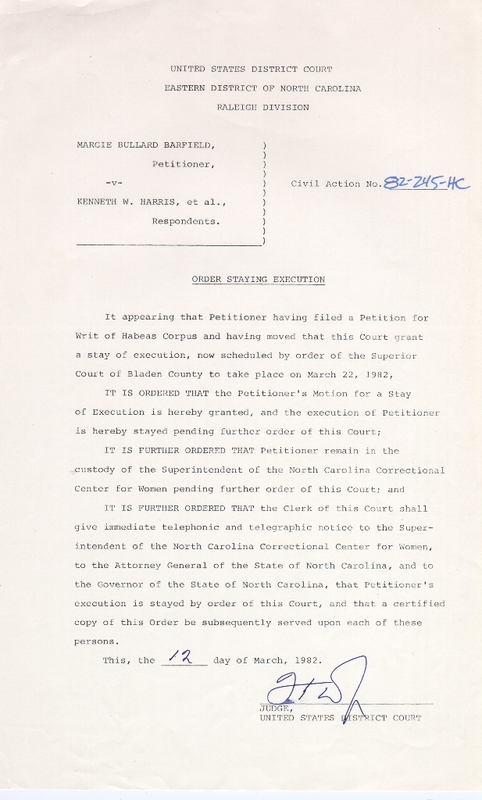 Margie Velma (née Bullard) Barfield was born on 23 October 1932 on a small tobacco and cotton farm in rural South Carolina. She was one of nine children. Velma was raised in a strict Pentecostal Christian household - remaining devoutly religious on-and-off throughout her life. At the age of 17, Barfield dropped out of school in order to marry her boyfriend Thomas Burke. Velma and Thomas had two children together and lived rather harmoniously in Parkton, N.C., as a family for more than fifteen years. This all changed when, in 1965, Thomas Burke was involved in a serious automobile accident. Following his accident Thomas began to use alcohol and drugs heavily to deal with the severe pain and headaches that resulted from his injuries. In 1969, while Velma was away attending to errands, the couple's house mysteriously caught fire. Thomas died in the fire from smoke inhalation. A few months after the fire that killed Thomas, a second fire engulfed the house, burning it to the ground.

Only a few months after Thomas Burke's death, Velma began dating a widower named Jennings Barfield. The two married in August 1970, but their marriage only lasted a few months. Jennings Barfield died 21 March 1971 of heart failure. Widowed again, a distraught Velma moved into her parents' home in Fayetteville, N.C. Not long after moving in with her parents, Velma's father died of lung cancer. In the summer of 1974, Velma's mother began complaining of severe stomach pains. She was admitted to an area hospital, but sent home when her symptoms subsided. In August 1974, a man that Velma was dating was killed in a fatal car accident. In December of that same year, Velma's mother Lillian again showed symptoms of a serious stomach illness. She was rushed to the hospital and was pronounced dead only two hours after being admitted. The doctors were unable to diagnose Lillian Bullard's fatal illness, nor was an autopsy was performed.

In 1975, Velma Barfield served six months in prison for writing several bad checks. Upon her release, Velma secured a job as a home health nurse for an elderly couple, 94-year-old Montgomery Edwards and his 84-year-old wife Dollie. In January 1977, Montgomery Edwards died. Only a few weeks later, in late February 1977, Dollie Edwards was also dead, having developed a strange stomach virus.

Velma Barfield was reassigned to care for a second elderly couple: John Henry and Record Lee. John Henry Lee died in June 1977, his doctors diagnosing it only as "a severe stomach virus."

Later in 1977, Velma moved in with her boyfriend Stuart Taylor. One day, while Velma and Stuart were attending a Pentecostal revival meeting in Cumberland County, N.C., Stuart began to complain of severe stomach pain. He was later admitted to the hospital and was dead within a matter of days. An autopsy was ordered. Before the autopsy report was returned, Lumberton police received a tearful phone call from Velma Barfield's sister saying that Velma had poisoned Taylor and others. Barfield was arrested and later confessed to poisoning with arsenic Montgomery and Dollie Edwards, John Henry Lee, and her mother, Lillian Burke. She claimed that she had killed them in order to cover up the fact that she had stolen money from them to support her illicit drug use. She later confessed to poisoning Stuart Taylor. Despite her confessions to these murders, Velma continued to refute claims that she had also killed Thomas Burke and Jennings Barfield.

Velma Barfield was convicted of the first-degree murder of Stuart Taylor in December 1978. The trial jury found "aggravating circumstances" and recommended that she be sentenced to death.

While on death row, Barfield became a born-again Christian and began to minister to fellow inmates and guards. Barfield began writing letters to Governor Jim Hunt in which she argued that her born-again Christian faith should be considered as a mitigating factor for commuting her sentence to life in prison. She garnered a great deal of support from many Christians across the United States, including evangelists Billy and Ruth Graham. Governor Hunt denied her requests for clemency. Barfield also appealed her conviction to the United States District Court of Eastern North Carolina. Despite a temporary stay of execution, her legal appeals were also eventually denied. Velma Barfield was executed on 2 November 1984 at Central Prison in Raleigh, N.C. She was 52 years old at the time of her execution. She was the first woman put to death by lethal injection in the United States.