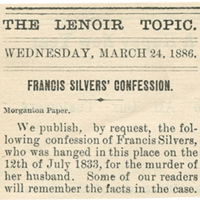 Frankie Silver
Convicted and sentenced to death for the 1831 murder of her husband, Charles, in their cabin in Mitchell County, N.C., Frankie Silver was hanged in Morganton on 12 July 1833. Her story has been transformed over time into ballad and legend to become one of Western North Carolina's most-recounted tales. 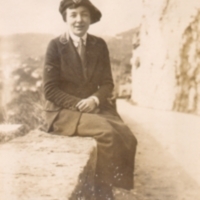 Nell Battle Lewis
Journalist, feminist, lawyer, and educator, Nell Battle Lewis was a strident human rights advocate in Raleigh in the early twentieth-century. Through her writings, Lewis became a leader in the death penalty abolition movement in North Carolina.

Dr. Charles Peterson
A North Carolina legislator in the early twentieth-century, Dr. Peterson championed the 1935 bill to substitute lethal gas for the electric chair as the state's official method of execution. His popularity among his fellow lawmakers, and his standing as a physician, achieved unanimous support for and passage of this self-proclaimed "pet project." 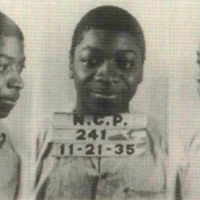 Allen Foster
On 24 January 1936, Allen Foster was executed for the 1935 rape of a Hoke County housewife, thereby becoming the first capital criminal in North Carolina to die by lethal gas. Mistakes made during his execution caused Foster to suffer a prolonged death, leaving witnesses with questions about the humaneness of the new method. 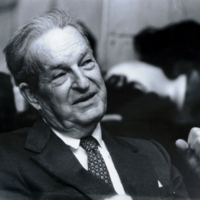 Paul Green
Throughout his celebrated career, Pulitzer Prize-winning dramatist Paul Green was deeply committed to various movements in support of human rights. He lent his support to these social justice causes in person, in print, and financially - including speaking out publicly to try to save the lives of several men on North Carolina's death row. 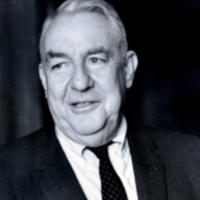 Velma Barfield
Velma Barfield was convicted and later executed for the 1978 poisoning murder of her boyfriend Stuart Taylor. She later confessed to a series of murders which she committed over the span of more than a decade. After her conviction, she became a born-again Christian and argued that her conversion should be considered in commuting her sentence to life in prison.

Elias Syriani
Born in Jerusalem and raised in Amman, Jordan, Syriani was sentenced to death for the June 1990 stabbing death of his wife Teresa. The murder was witnessed by their 10-year-old son, John. More than a decade later, after forgiving their father, John and his three sisters petitioned Governor Mike Easley for commutation of their father's death sentence. 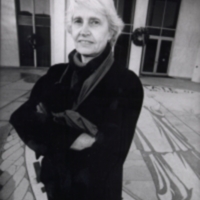 Ellie Kinnaird
North Carolina State Senator Ellie Kinnaird (Dem., 23rd Senate District) has long been an outspoken opponent of the death penalty in the state. In 2003, Kinnaird sponsored a bill to institute a two-year moratorium on capital punishment and has, more recently, been at the forefront of the debate against lethal injection.