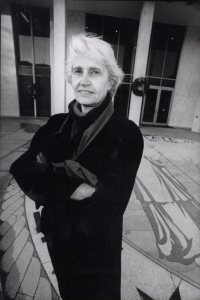 Eleanor "Ellie" Kinnaird is (as of 2007) a Democratic member of the North Carolina State Senate representing the state's 23rd Senate district - a district which includes Orange and Person counties. A longtime advocate for the environment, education, social justice, and campaign finance reform, Ellie Kinnaird first became involved in civic activities in 1964 when she joined the League of Women Voters.

In 1986, Kinnaird was elected mayor of the city of Carrboro, N.C., a position which she held until 1995. Kinnaird then moved to state politics. She was elected to the Senate in 1996 and is now serving in her sixth term as a state legislator. She has served in various capacities on a number of Senate committees, including: Co-Chair of the Senate Appropriations on Justice and Public Safety Committee, Co-Chair for the State Senate Mental Health/Youth Services Committee, and Vice-Chair for the Agriculture/Environment/Natural Resources Committee.

In recent years, Senator Kinnaird has become nationally known for her vocal opposition to the death penalty. In 2003, Kinnaird sponsored a bill (S.B. 972) in the North Carolina State Senate to institute a two-year moratorium on capital punishment for the purpose of studying the inequities in capital sentencing along racial, economic, and geographic lines. The moratorium bill was supported by over 750 endorsers, including the cities of Charlotte, Greensboro, and Chapel Hill, and Orange and Durham counties. The Senate passed the bill, but it was later defeated in the North Carolina House of Representatives. Senator Kinnaird has remained involved in the debate over capital punishment. More recently, she has argued against the use of lethal injection, stating that the method is inhumane and has the potential for causing severe pain to those being executed.

In 2007, Senator Ellie Kinnaird donated a collection of capital punishment-related materials to the Southern Historical Collection at the University of North Carolina at Chapel Hill. The papers include drafts of the moratorium bill (see below), documents relating to individual death row inmates, notes, clippings, and other death penalty materials. 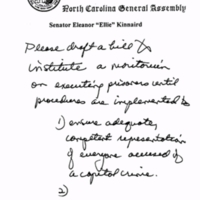 2003: Draft of S.B. 972, a bill calling for a two-year moratorium on executions in North Carolina.