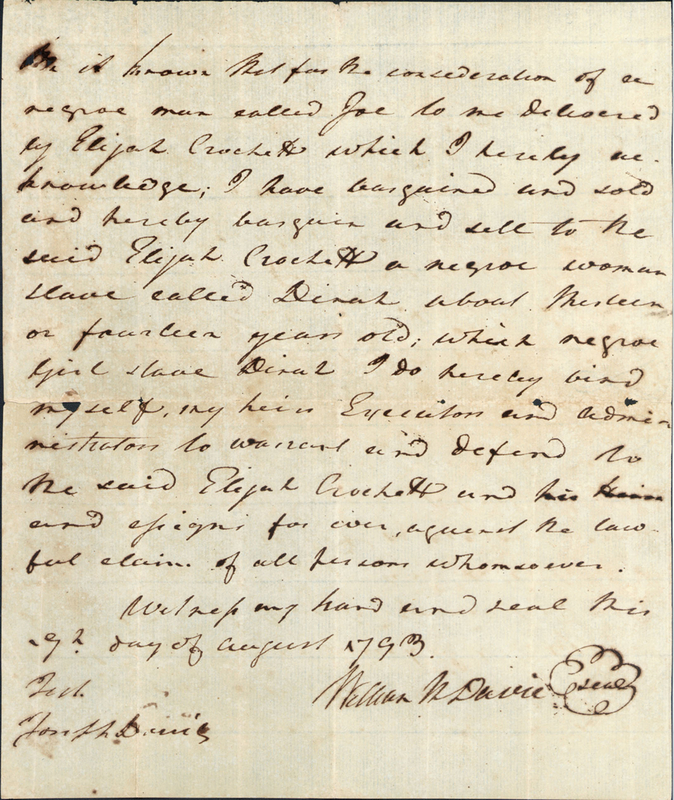 This bill of sale documents Davie's purchase of a "negroe man called Joe" and the sale of a "negroe woman slave called Dinah about thirteen or fourteen years old." There is no purchase price mentioned in the agreement. 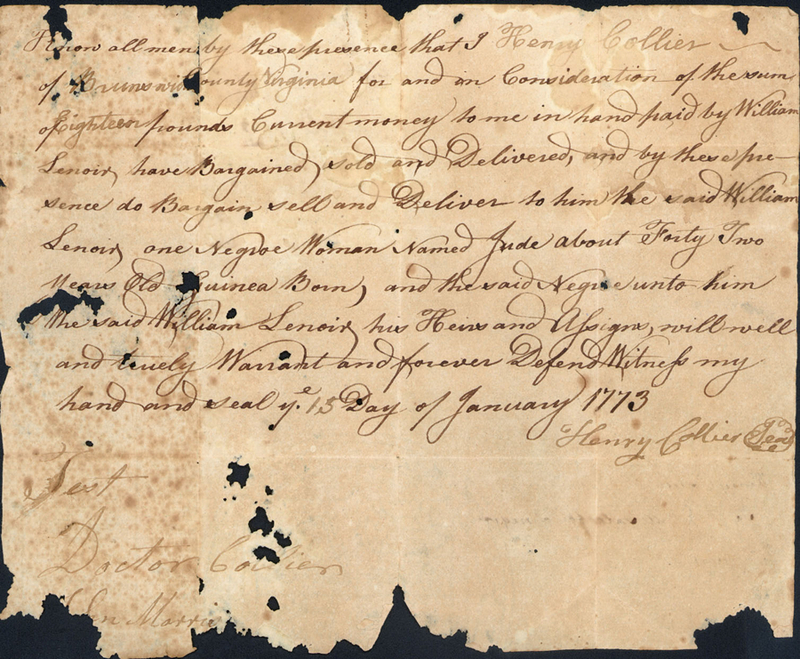 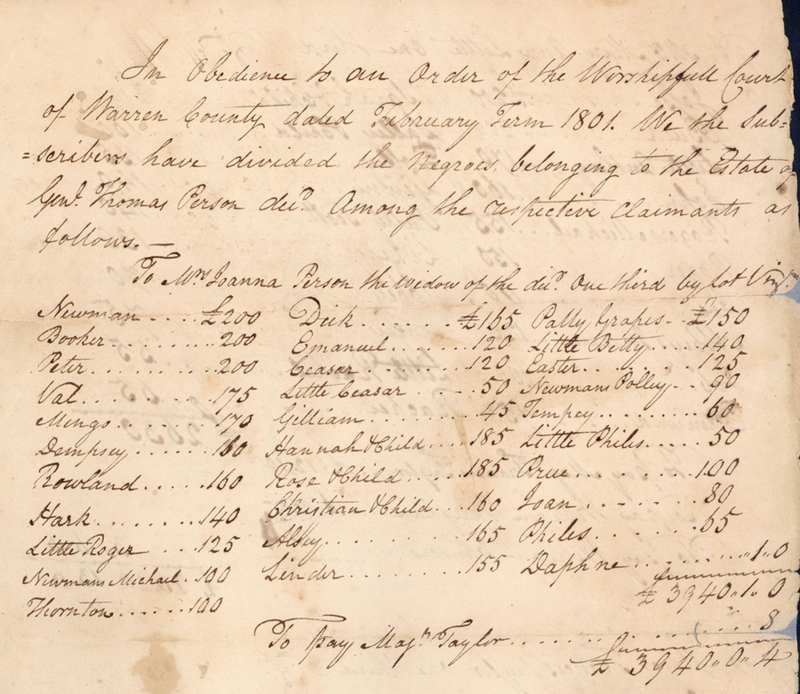 "have divided the Negroes belonging to the Estate of Genl. Thomas Person decd"

Landed proprietor, member of the General Assembly and Provincial Congress, and brigadier general in the American Revolution, Thomas Person assisted in securing the charter for the University of North Carolina in 1789 and was a member of its first board of trustees from 1789 to 1795. The settlement after Person's death divided the "Negroes belonging to the Estate of Gen. Thomas Person" among his widow and children. The name and value of each slave are listed. The third of the estate received by the widow was valued at 3940.10 pounds. 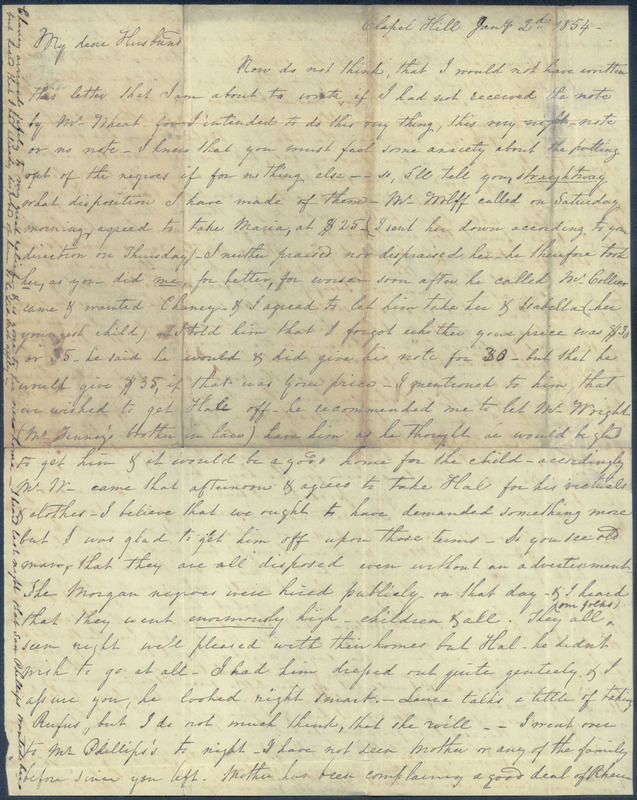 ". . . they are all disposed even without an advertisement."

Lucy relates to her husband the hiring out of several of their slaves, which she refers to as the "putting out of the negroes." The slaves were hired out without advertisement, and Lucy writes that they all appeared "well pleased with their homes but Hal, he didn't wish to go at all." Lucy also reports that "the Morgan negroes were hired publicly . . . they went enormously high--children & all." 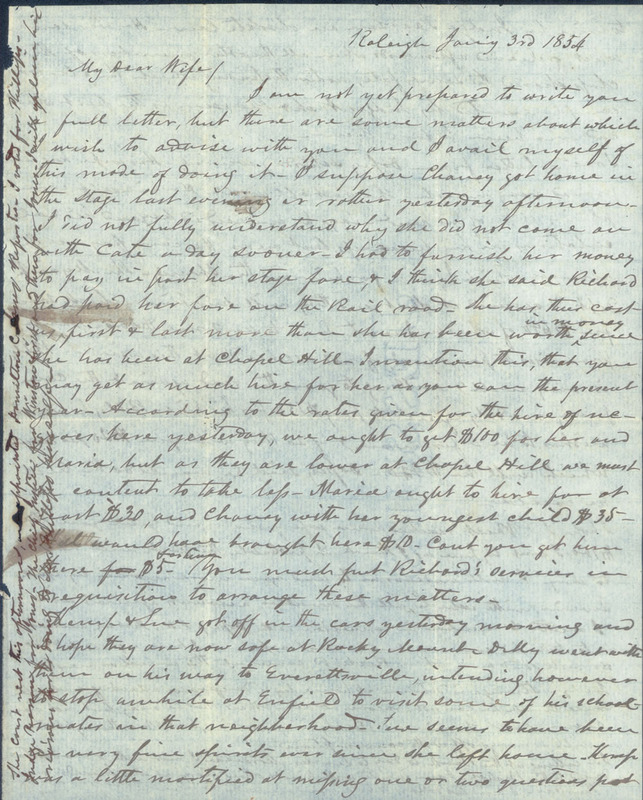 W. H. Battle writes home to wife Lucy to discuss the hiring out of slaves. Battle laments the lower rates of Chapel Hill when compared with Raleigh and writes that they "must be content to take less." He goes on to complain about paying Chaney's stage fare back to Chapel Hill and writes that "she has thus cost us first & last more than she has been worth in money." He advises his wife to "get as much hire for her" as she can for the present year and estimates that Chaney can be hired out along with her youngest child for thirty-five dollars.