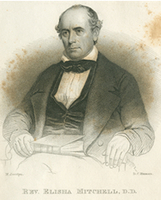 From the North Carolina Collection

Gaston, William. Address Delivered before the Dialectic and Philanthropic Societies at Chapel Hill, N.C., June 20, 1832. Raleigh: Joseph Gales & Son, 1832. Judge Gaston was one of the state's most prominent jurists and a member of the Board of Trustees from 1802 until his death in 1844. This address is perhaps his most famous and was delivered at the Commencement of 1832. For nearly twenty pages Gaston exhorts the students to strive for excellence, to maintain honesty and integrity in all things, and to serve the public. Then he tells them, "On you too will devolve the duty which has been too long neglected . . . for the ultimate extirpation of the worst evil that afflicts the Southern part of our Confederacy. Full well do you know to what I refer . . . it is Slavery which, more than any other cause, keeps us back in the career of improvement." He ends by imploring his audience not to allow the conflict over slavery to result in disunion. C378 UK3 1832G.3

Mitchell, Elisha. The Other Leaf of the Book of Nature and the Word of God. 1848. This work is Mitchell's apology for slavery. In it he explores numerous Biblical texts and other writings on the ownership of property and concludes that slavery is no worse than other forms of holding property. "It is remarkable how many warnings, counsels, expostulations, and commands the New Testament contains, all having reference to the danger of riches," he observes. Yet "God has said nothing expressly" against slaveholding. "I am the owner of a few slaves," he continues, "of certain tracts of land of no great value, and of some other property. If it is a sin to hold the first, it is a sin to hold the others. If I were to be convinced that it is a sin to hold the first, I would abandon them all." Though he belittles his possessions, Mitchell was actually wealthier than the average man. Cp326.7 M68o.