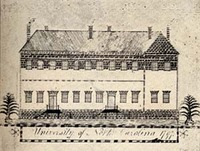 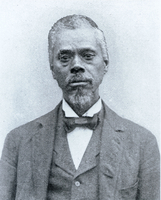 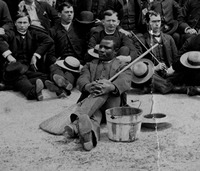 "Slavery and the Making of the University" introduces materials that recognize and document the contributions of slaves, college servants and free persons of color to this history with an obvious emphasis on the university's antebellum period.

Not all items from the bibliography have been digitized, though their citations are included here. The idea for the slavery project grew out of the work of University Archives staff on a UNC history digitization project, "The First Century of the First State University." As we did research and selected items for inclusion in the "First Century" project, we encountered documents that verified what we had assumed to be true: slaves had contributed mightily to the construction of Old East, the Old Chapel (Person Hall), Old West, the New Chapel (Gerrard Hall) and additions to Old East and Old West. All who worked were not called "slaves;" some were called "hands" or "labor." Some were simply called "Negro workmen." We know that some were free blacks, like the famous cabinetmaker Thomas Day, who fashioned the interior woodwork in the libraries of the Dialectic and Philanthropic societies. There are numerous accounts of plasterers, brick-makers and bricklayers, carpenters and various other laborers; however, there is more to the story than just construction work.

There are stories of heroism as well. When students burned the belfry in 1856, it was a servant who was sent to put out the fire. When a student caught fire while trying to light one lamp from another and was ignored by other students, it was a college servant who saved his life. There were those who shined the shoes of college boys, made their beds and emptied their slop buckets. There was one who was so adept at laying fires that he was greatly admired and revered for his skill. There was a letter from a college servant who could not get work because so many of the students were leaving to join the Confederate army in 1861, and accounts of other servants who allowed themselves to be used in college pranks in order to earn a little money. Then there was George Moses Horton, a local slave who taught himself to read and bought his time from his owner by writing poems for college students to give their sweethearts.

We shared our discoveries with each other as we worked. Some of the documents spoke of slaves as escheated property. Human beings were often sold along with real estate by university attorneys, who received a commission on the sale and turned the profits over to the treasurer of the Board of Trustees. Some of these discoveries were both sad and shocking, and some were downright chilling. We never became immune to them.

We hope that this online exhibit will serve as only the beginning of a journey of discovery. We know that there are undoubtedly many more stories to be found in the papers of university faculty, administrators and students and in the administrative records of the university itself. As new discoveries come to light, we will add them to the online exhibit, and we invite you to share your discoveries with us as well. We hope, too, that this online exhibit will stimulate much thought and discussion about this important aspect of the history of the University of North Carolina. We wish you an enlightened journey.