From its earliest days the university depended on the labor of individuals it termed "college servants." It is difficult to document the lives of these servants, but the items in this section provide some glimpses of them.

We have found nothing to indicate that the university ever bought slaves. However, it was a common practice for slaveholders to "hire out" their slaves to perform services for others. In this section is an item documenting two instances in which the university paid local citizens for the hire of slaves to work as college servants.

Arthur Stanley Link in his History of the Buildings at the University of North Carolina states that "it had been the custom for some of the wealthier students . . . to bring with them to college their personal slaves." This practice was apparently prevalent enough that the trustees in 1845 adopted an ordinance declaring that "no servant except the regular college servants shall be employed by the students to perform any of the ordinary duties of college servants."

Among the ordinary duties of the college servants were getting up before daylight and kindling fires in the students' rooms as well as keeping the dormitories and recitation halls clean. Students were charged a fee for servant hire, but it seems to have been permissible to pay extra for services beyond the servants' ordinary duties. According to Kemp P. Battle in his History of the University of North Carolina, "Few students blackened their own boots or carried their own parcels. The profits of such jobs went to the servants." 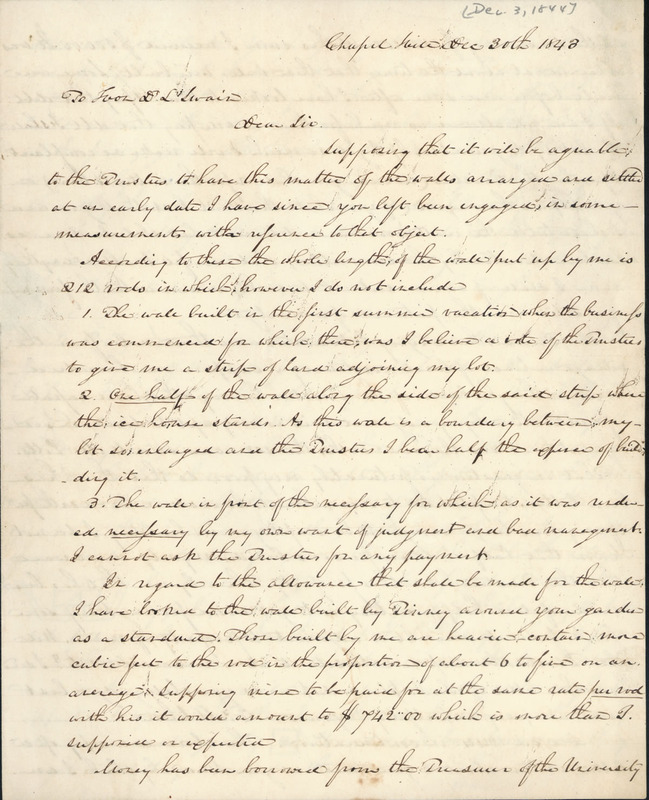 Professor Mitchell writes to President Swain proposing a blind ditch to convey water away from the foundation of South Building. He says "the college hands" could dig it in a week.

1848. "Account of Expenditures for the improvement of the College grounds."

This account, in Elisha Mitchell's handwriting, includes "Wages board clothing Etc of Sim Fred" and "Wages of Servant Edmund."

President Swain suggests to Manly, secretary-treasurer of the Board of Trustees, that the college servants be given the task of cutting "old, decayed and decaying trees from our own lands" in order to supply the students with firewood. 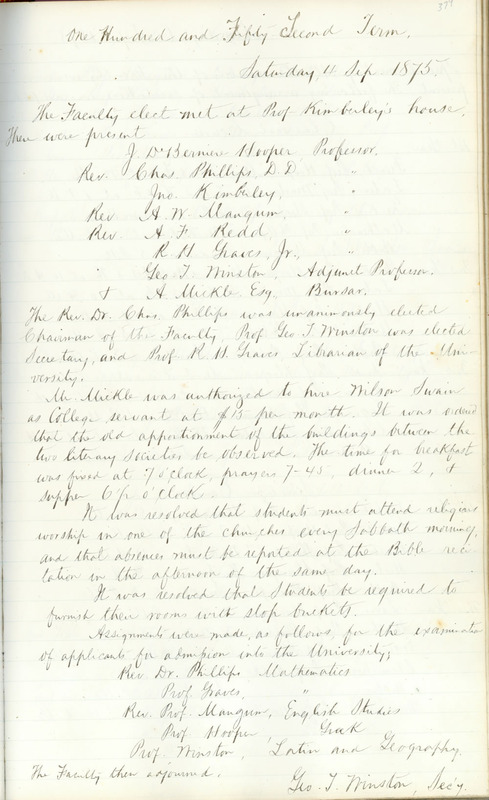 "Mr. Mickle was authorized to hire Wilson Swain [later Caldwell] as College
servant at $15 per month" [first meeting after the reopening of the university]. 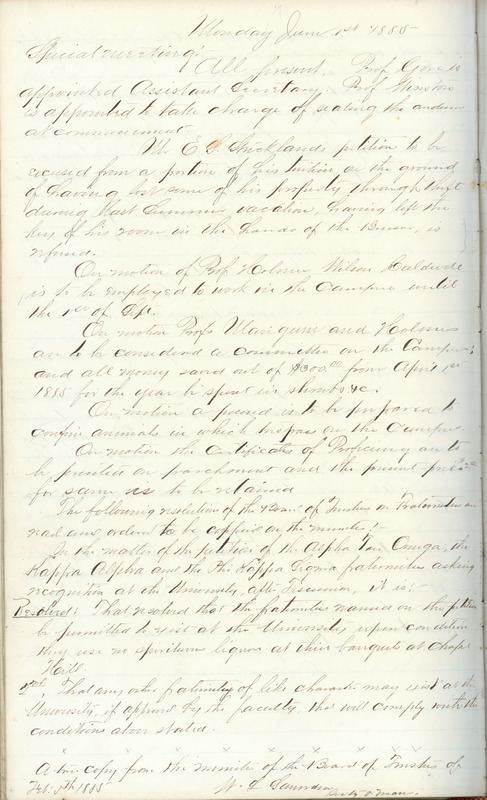 "Wilson Caldwell ... employed to work in the campus"

"On motion of Prof. Holmes Wilson Caldwell is to be employed to work in the
campus until the 1st of Sept."

Inscription on the First Caldwell Monument, 1936.

After the Class of 1891 arranged to have the old Caldwell Monument placed over the grave of Wilson Caldwell, they placed a marble stone at its base with the inscription seen here. The inscription pays tribute not only to Wilson Caldwell but to longtime college servants November Caldwell (Wilson's father), David Barham, and Henry Smith. Image from the North Carolina Collection Photographic Archives.

"Committee on arranging duties of servants reported that the dormitories are now divided equally and allotted to Charles, Eli & Bill. John assigned Profs. Venable & Holmes' lecture rooms and Laboratories and the Gymnasium. Charles, in addition to dormitories, assigned Pres[iden]t's lecture room and reading room & Library and the other recitation rooms divided between Eli & Bill. Committee on Servants requested to make arrangements for the emptying of the slops & c." 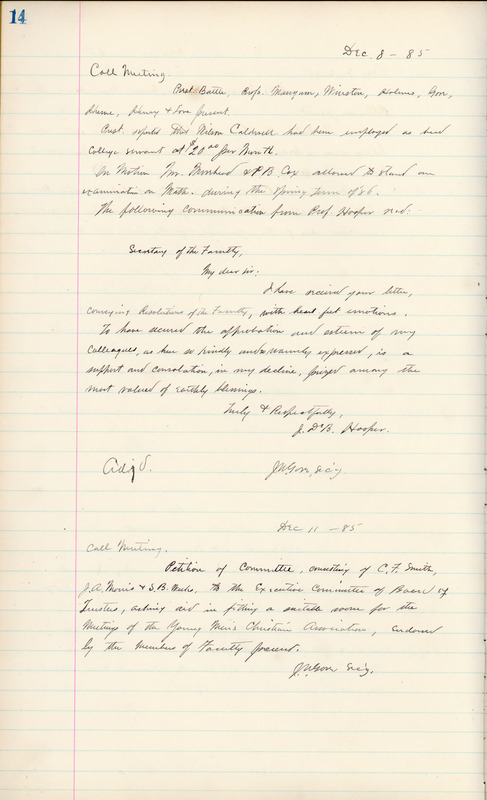 "Pres[iden]t reported that Wilson Caldwell had been employed as head college servant at $20.00 per month." 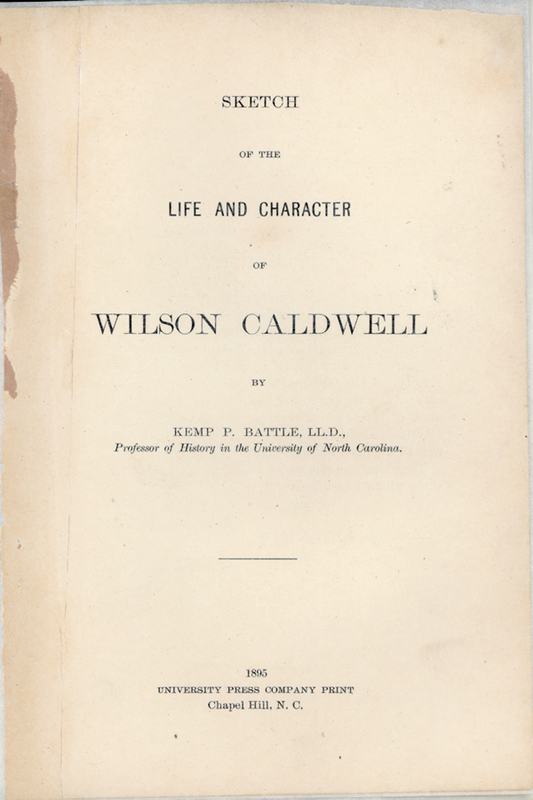 Wilson Caldwell was born into slavery but lived to experience the Civil War, emancipation, Reconstruction, and Jim Crow. He was the son of November Caldwell, who had been President Joseph Caldwell's coachman, and Rosa Burgess, a slave of President Swain. In 1853, when he was twelve years old, he began working for Thomas Paxton, the English gardener who had been hired to beautify the campus. After about eight years, according to Battle, "he was promoted to be a waiter" in the laboratories, dormitories, and lecture halls. He held this position until 1869, when the new Board of Trustees cut his wages. Resigning in "disgust," he obtained a position as head of "a free school for colored children in Chapel Hill." When the university reopened in 1875 he "was offered and accepted his old position, with the duties and responsibilities, although not with the name, of janitor." In 1884 he left the university briefly and moved to Durham, hoping to improve his wages. But he came back to Chapel Hill, informing Battle that "Durham is not a place for a literary man." (North Carolina Collection, CpB C145b).