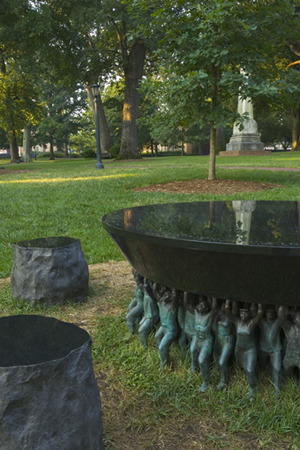 Writings and Speeches on Slavery

Throughout the antebellum era slavery was one of the issues to which the students repeatedly returned in their compositions and debates. At times they were critical of it, but overall they upheld it as an institution. At first there seemed to be no stigma attached to the expression of negative views. After all, in a debate both sides of the question had to be argued. But over time the rhetoric became increasingly strident, and negative views were less and less tolerated.

In 1799 Jeremiah Battle, whose family owned slaves, penned a composition in the form of a letter "To a friend in the country." He advised his friend not to equate happiness and success with the acquisition of "a great number of slaves." In 1807 the Dialectic Society debated the question, "Ought slavery to be abolished in the United States?" and decided in the affirmative. Just five years later the society argued "Would the emancipation of the Slaves be beneficial to the United States?" and decided it would not.

The specter of disunion appeared as early as the 1830s. Judge William Gaston spoke at the Commencement of 1832, plainly stating his view that slavery was evil and imploring the students to do everything they could to protect the Union. Gaston's "bold language did not weaken his standing in the State," according to Kemp P. Battle's History of the University of North Carolina. In fact, his speech went through five printings.

Faculty members were prohibited from espousing sectarian religious or partisan political views. Yet they sometimes made known their opinions on slavery. Elisha Mitchell did so in 1848 with no ill consequences. But in 1856 Benjamin Hedrick was dismissed for writing an editorial in which he stated his agreement with John C. Fremont's position that slavery should not be extended to the territories.