The idea that climate could affect the way human beings grow and adapt to their environment has a long and controversial history in the fields of philosophy and medicine. Beginning with Hippocrates, many scientists believed that climate was responsible for racial difference, though specific theories about how climate affected difference were often complicated or even contradictory. Going beyond physical characteristics such as skin color or hair type, the climate theory of racial difference also asserted that emotions, attitudes, and intellectual capacities were informed by environmental factors. 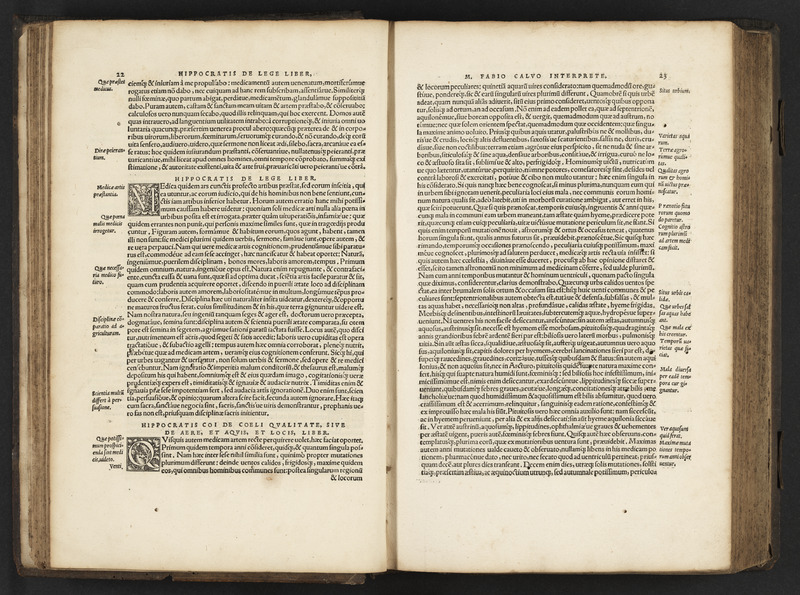 Hippocrates’s Airs, Waters, Places is considered to be the source document of climate-based theories of racial difference. In this treatise, Hippocrates describes the effects of different environments, diets, and customs on human disposition, including physical and moral susceptibilities to disease and humors. These differences are epitomized by European peoples, whom Hippocrates characterizes as ungovernable yet courageous as a result of their cold climate, and Asian peoples, who are characterized as peaceful but timid due to their hot climate. 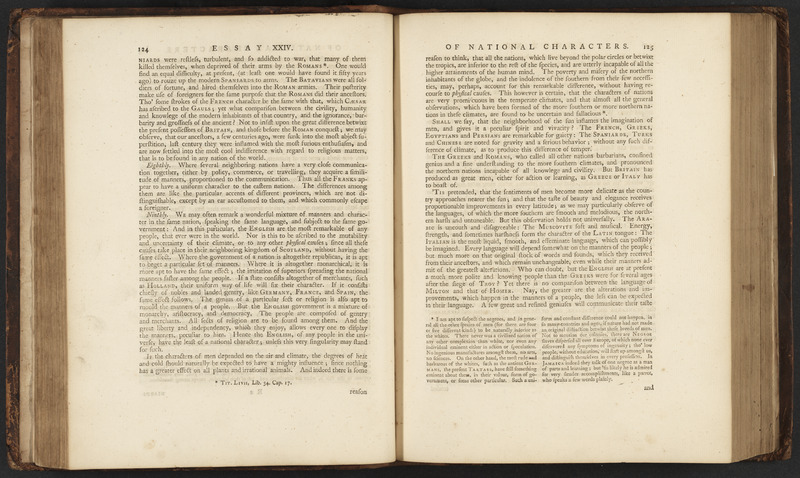 Essays and Treatises on Several Subjects

In his “Essay on National Characters,” philosopher David Hume rejected many of the precepts of climate-based racial difference, especially those that aligned regional temperature with racial temperament. However, in the second edition, Hume added a footnote declaring the supremacy of “whites” over people of African descent, asserting that they must be distinct species. Hume’s writings are consistent with the turn in science towards classification during the eighteenth century.

A popular conception of climate’s effect on racial difference was that hot and cold temperatures caused changes to bile, or the body’s humors more generally. In his magnum opus on political theory, Montesquieu claimed that the effect of climate on bile meant that different political systems would work better or worse depending on how hot, cold, or temperate the country. 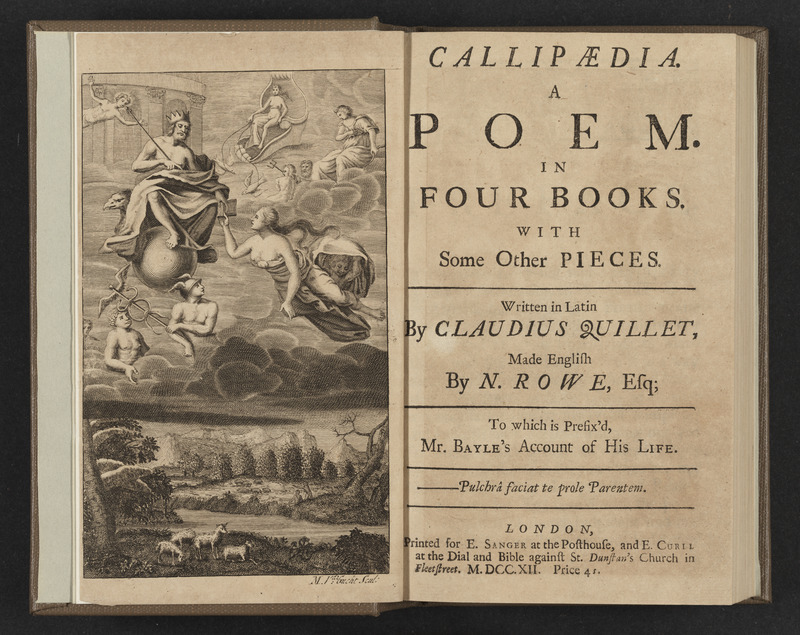 This popular poem, originally written in Latin but translated into several modern languages, had as a subtitle “The Art of Having Beautiful Children.” A mixture of popular beliefs and current scientific theories, the poem characterizes racial difference as a function of climate, claiming that “ev’ry [body] part alike becomes its Place.” 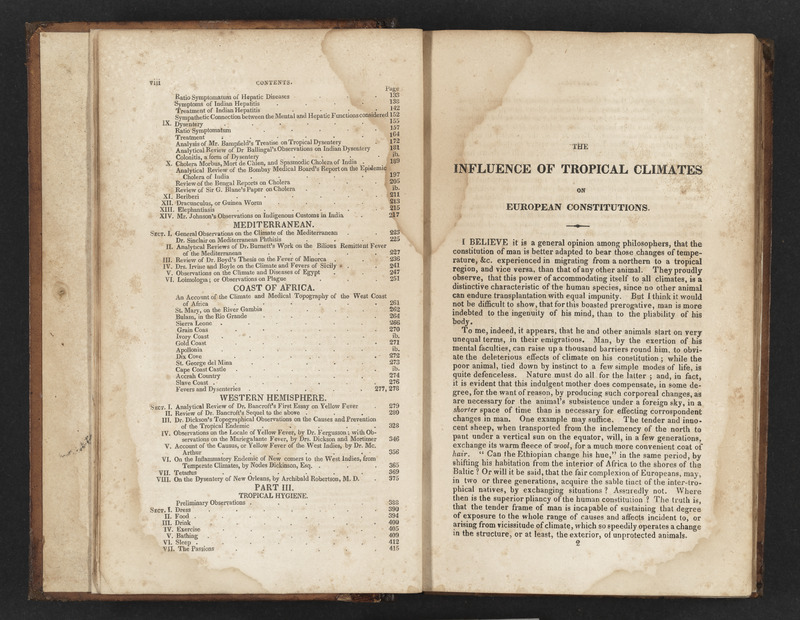 The Influence of Tropical Climates on European Constitutions

Some who believed that race was determined by climate held that one’s racial characteristics would change within a few generations if exposed to a new climate. In his treatise on European susceptibility to disease, physician James Johnson rejected this hypothesis. Johnson saw race as innate and immutable, claiming that the mixing of races was rare if not impossible. He purported that many seemingly mixed race individuals were actually Europeans whose skin and hair had changed due to acclimatization. 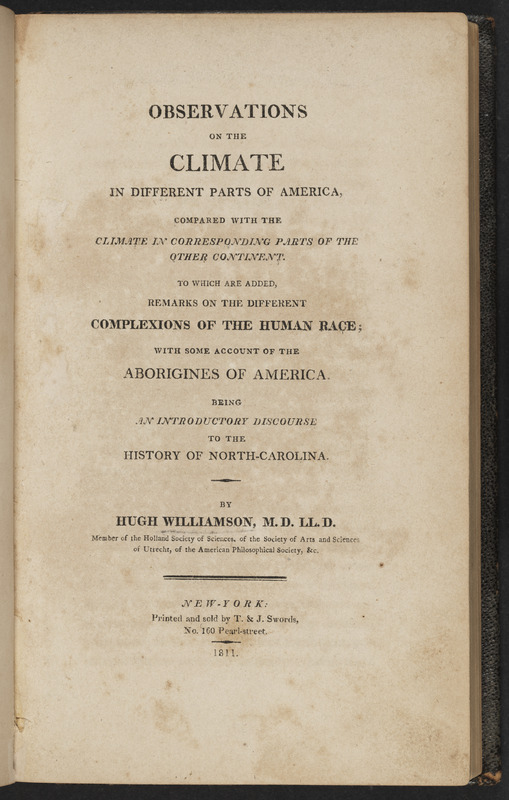 Observations on the Climate in Different Parts of America

By the eighteenth century, attempts to classify the natural world, including humanity, had led some natural scientists to conclude that there were distinct races of man that constituted separate species. Physician and politician Williamson’s rejection of this theory asserted that climate, sentiment, and habits were the origin of race: “Nature writes, in strong characters, on the human countenance.” 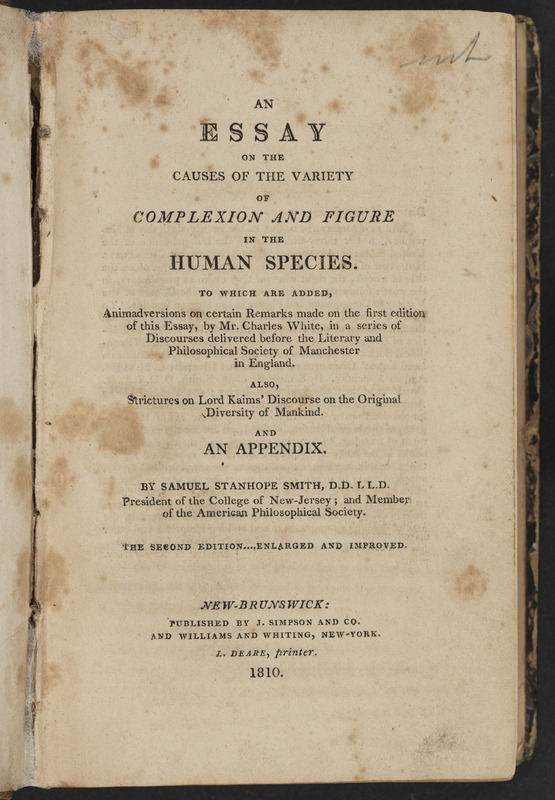 Like Hugh Williamson, Samuel Stanhope Smith posited that environment, including climate but also manners and customs, caused racial difference. Though considered progressive in his views at the time, his theory that exposure to white, British culture could make enslaved Africans lighter-skinned over time perpetuated the racist equation of whiteness with civilization. He cites the case of Henry Moss, a free black man who possibly had vitiligo or piebaldism, as an example of people of African descent “improving” under the right conditions. 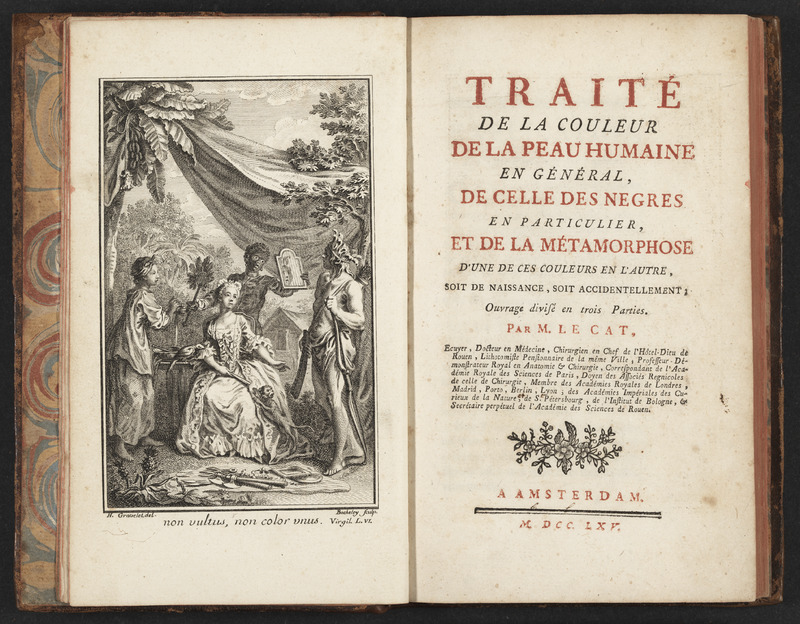 Le Cat was the first to identify melanin as a cause of differing skin colors in human beings. Le Cat termed melanocytes “ethiops” due to his observation that darker-skinned people, like many of African descent, had more melanocytes than lighter-skinned people. Le Cat’s theories contradicted the older model of environmental determinism that claimed heating and cooling of bile caused changes in skin color. Le Cat theorized blackness as an innate physiological feature, instead of a consequence of external factors acting upon the body over time.