The idea that different races were particularly subject to or immune from certain diseases helped spread the idea of racial difference throughout the Western hemisphere. Dr. John Lining’s assertion that Africans were immune to yellow fever led to expectations that Africans would care for the sick. Slavery advocate Dr. Samuel A. Cartwright published prolifically about several ailments such as “drapetomania,” which he described as a mental illness that caused enslaved blacks to flee captivity. Proponents of an innate basis for racial inferiority have argued that race mixing lead to deformities that would ultimately destroy the white race. 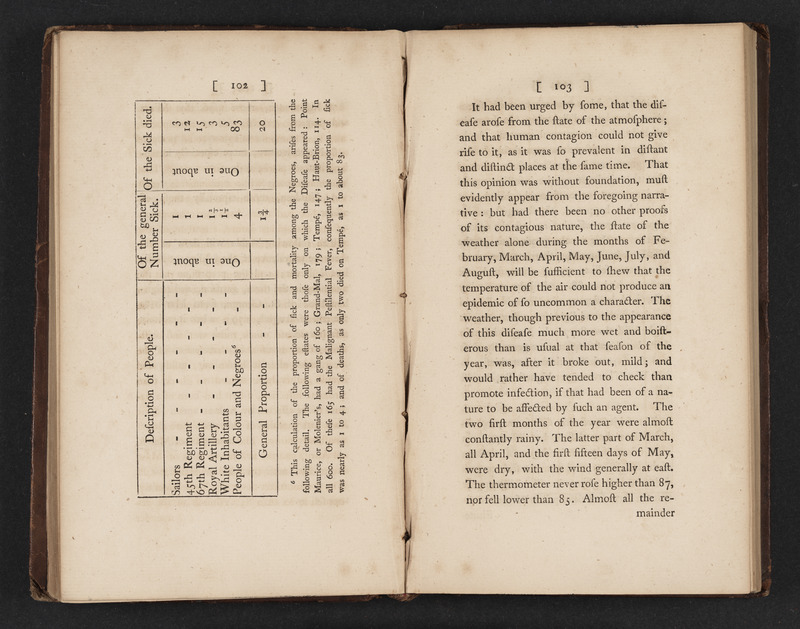 The morbidity and mortality chart shown here suggests that “People of Colour and Negroes” were less likely to get sick and die during a 1793 yellow fever outbreak in the West Indies. A letter written by Dr. John Lining describing the 1748 yellow fever outbreak in Charleston, South Carolina, is appended to the end of this report. Lining concluded that blacks were immune to yellow fever, a claim that had devastating consequences during the 1793 yellow fever epidemic that struck Philadelphia, when black suffering was ignored or minimized. 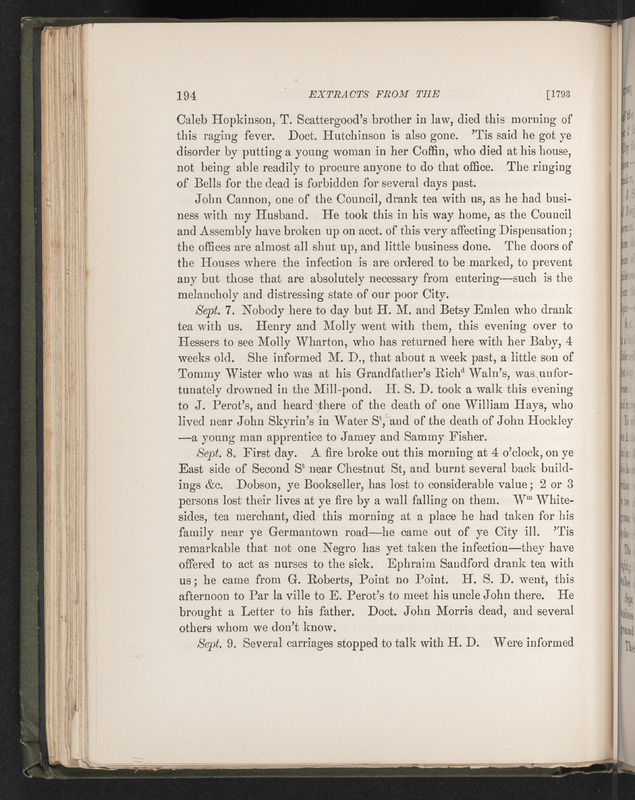 Extracts from the Journal of Elizabeth Drinker

Philadelphia resident Elizabeth Sandwith Drinker kept a diary from 1758 to 1807. During the city’s 1793 yellow fever epidemic, Drinker repeated the claim that blacks were immune to the disease, stating, “’Tis remarkable that not one Negro has yet taken the infection – they have offered to act as nurses to the sick.” 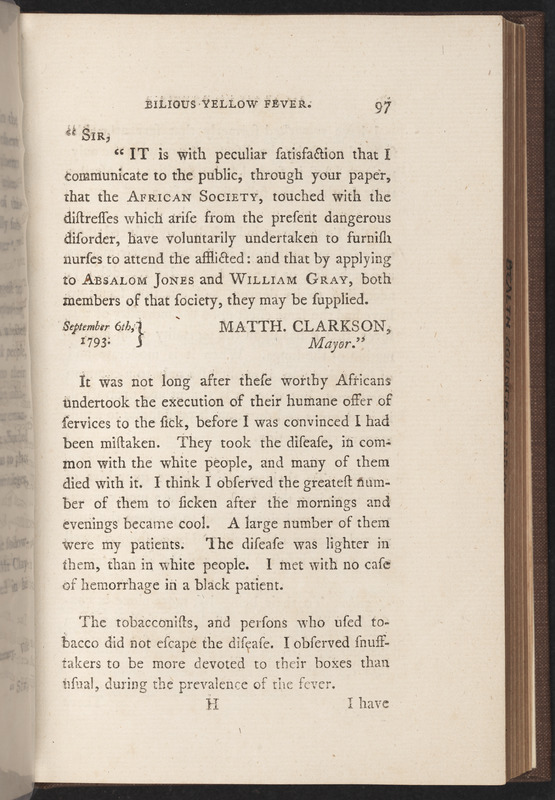 After seeing how yellow fever affected the black population during Philadelphia’s 1793 yellow fever epidemic, physician Benjamin Rush admits he was wrong to repeat John Lining’s conclusion that blacks were immune to yellow fever. Despite his very public disavowal, Rush also believed that race mediated degrees of suffering from the disease and remained committed to the idea that blacks suffered less from yellow fever than whites. 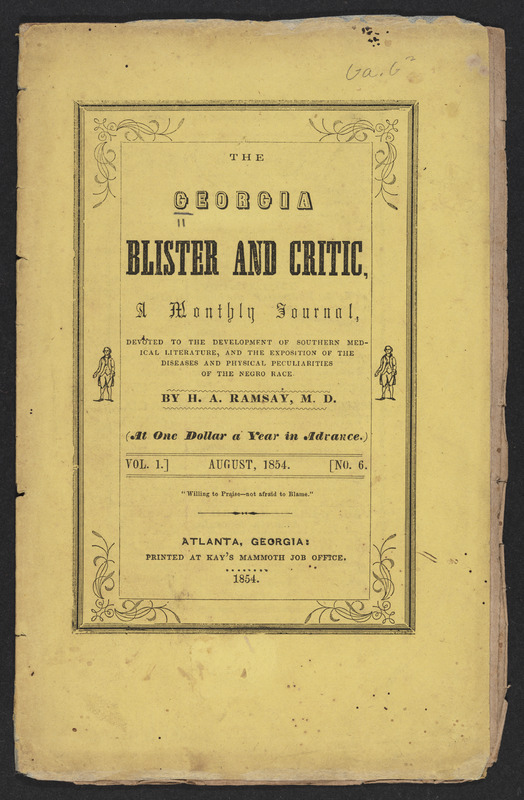 “Cartwright on the Diseases and Physical Peculiarities of the Negro Race”

In an article published in the monthly Southern medical journal The Georgia Blister and Critic, Southern physician Samuel A. Cartwright describes several “complaints among negroes” and offers unique recommendations for treatment. Cartwright’s views were shared widely, and were republished and discussed in medical journals throughout the Southern United States. 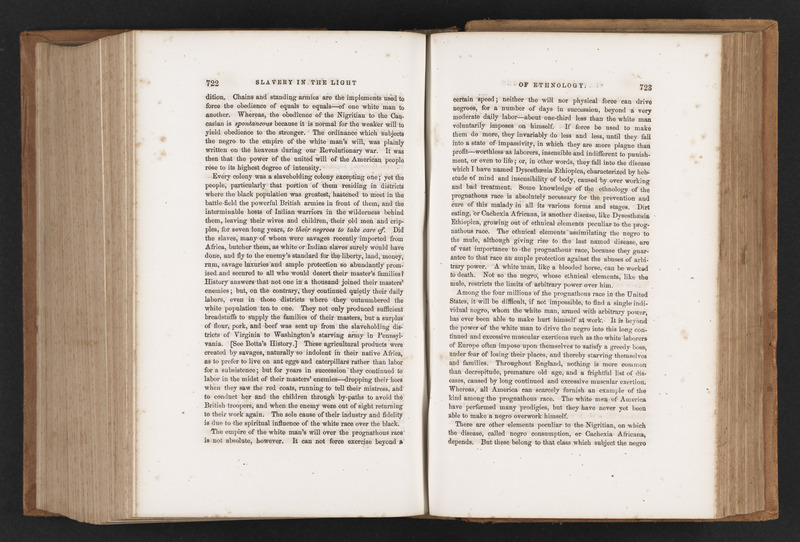 Cotton is King, and Pro-slavery Arguments

Many of the pathologies presented by pro-slavery physicians were continuations of theories developed during the eighteenth century. This compilation of pro-slavery essays includes Southern physician Samuel A. Cartwright’s descriptions of “Dysesthaesia Ethiopica” (a black person’s unwillingness to work) and “Cachexia Africana” (dirt eating). Cartwright is perhaps most famous for coining the term “Drapetomania,” which he described as a disease caused by mental illness that caused black slaves to flee captivity. 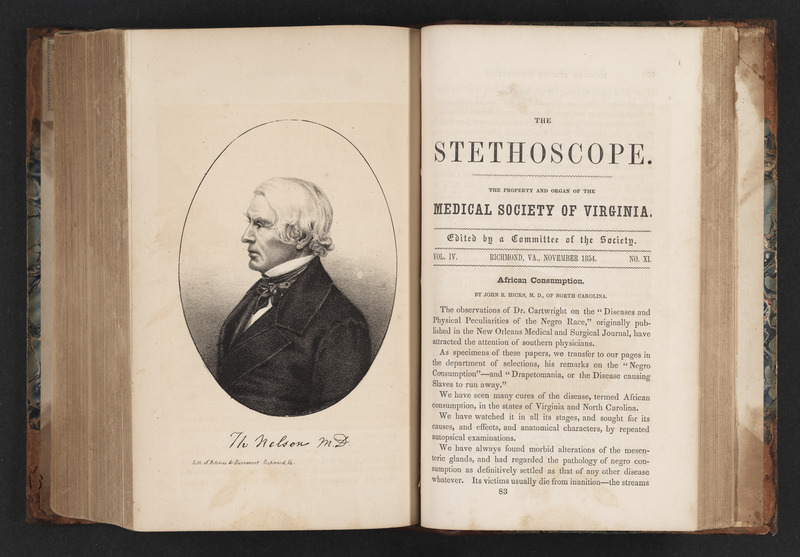 Unable to reproduce Samuel A. Cartwright’s findings, North Carolina physician John R. Hicks and the editors of The Stethoscope question the existence of a “distinctive negro physiology or pathology.” 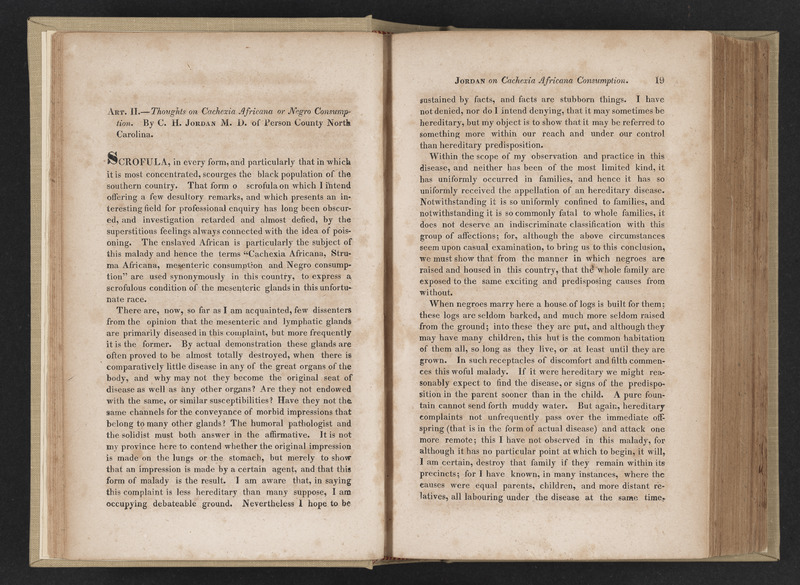 Person County, N. C., physician C. H. Jordan argues that “Negro consumption” (which he says is synonymous with “Cachexia Africana” although it is defined differently elsewhere) is a preventable and treatable illness and is not unique to blacks. Jordan admits that by publishing such views, he is “occupying debatable ground,” but that “facts are stubborn things.” 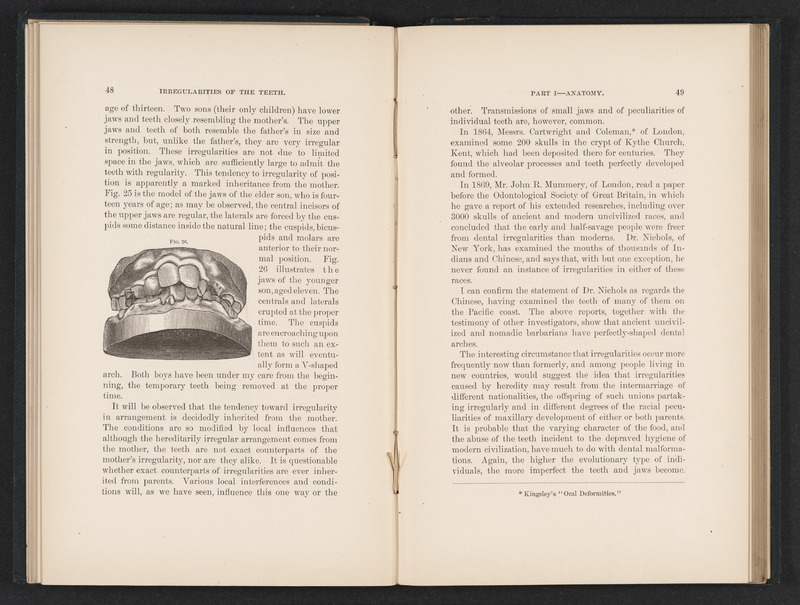 Irregularities of the Teeth and their Treatment

Dentist Eugene S. Talbot notes a lack of irregularities in the teeth and jaws of “ancient uncivilized and nomadic barbarians” and that “irregularities caused by heredity may result from the intermarriage of different nationalities.” 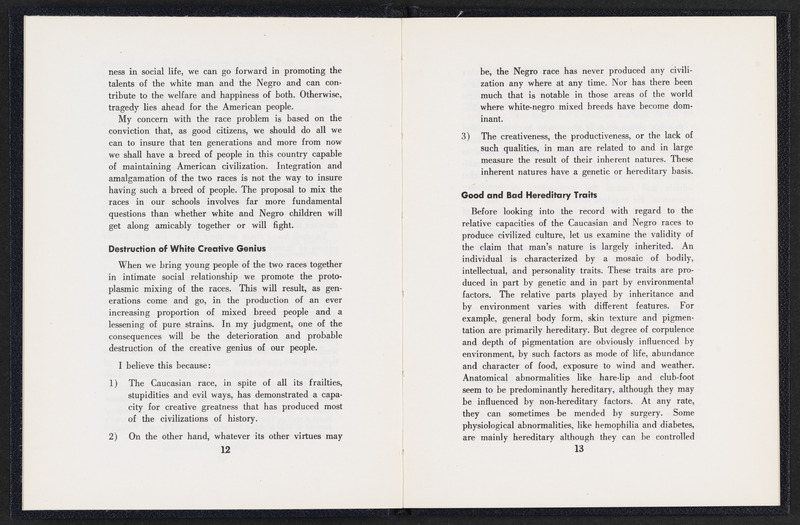 Wesley Critz George (1888–1982) was professor of histology and embryology and chair of the Anatomy Department at the University of North Carolina at Chapel Hill School of Medicine, and a researcher of the genetics of race. George opposed integration and race mixing, arguing that it would destroy the superior white race.