As opposed to newspapers printed to provide current information to wide audiences, some individuals have published limited copies of newspapers in either handwritten or typeset format primarily for their own enjoyment. The contents of these journals were composed almost entirely by the publisher, often making observations about any topics which caught his or her fancy. 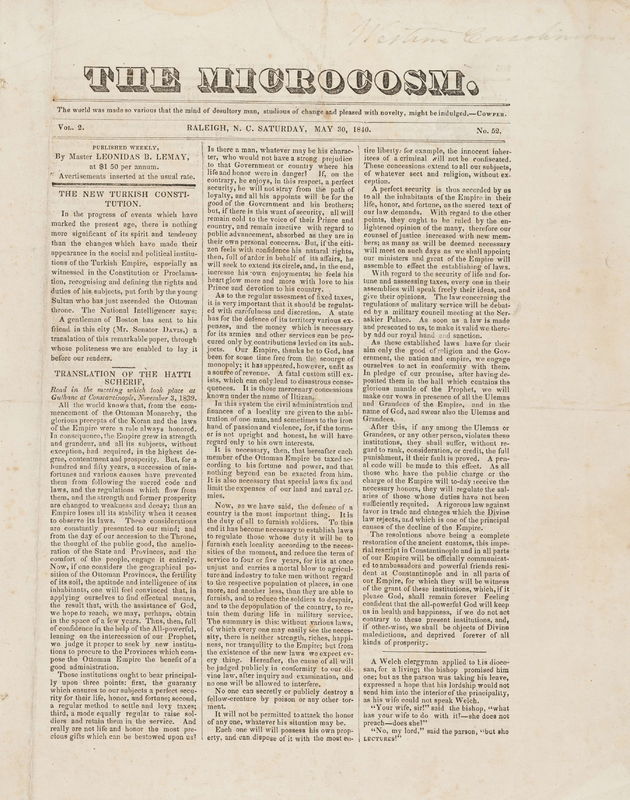 The Microcosm was published in Raleigh, North Carolina, by nine-year-old editor “Master” Leonidas B. Lemay, who described the newspaper as “a little world.” The paper’s content consisted primarily of reflections on life, romantic love and other emotional topics, poetry and mildly amusing anecdotes. An 1838 issue provided a detailed description of the coronation of Queen Victoria which had occurred about a year previously. 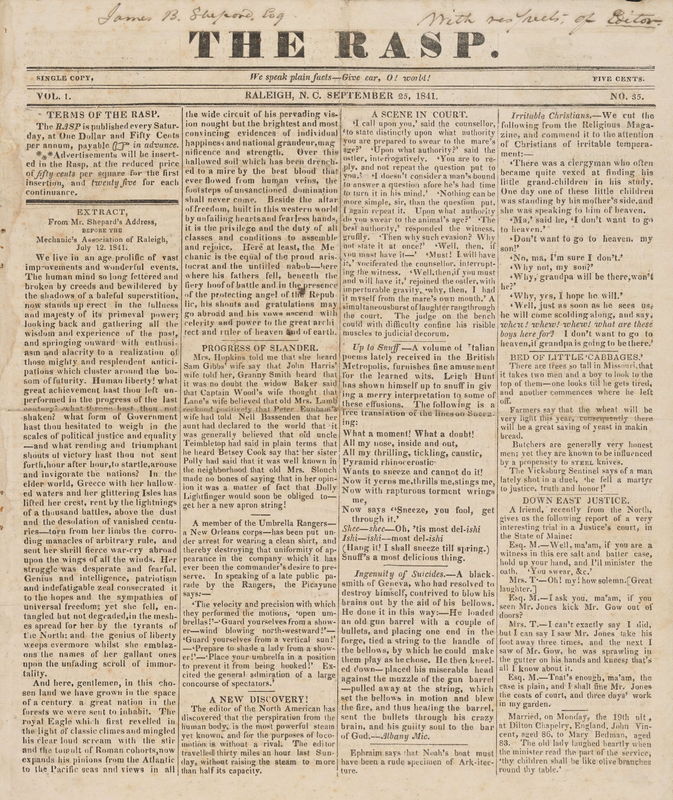 The Rasp was a weekly newspaper printed in Raleigh, North Carolina, and distributed in eastern and central North Carolina beginning in 1841. While the paper described its editorial approach on its masthead as “We speak plain facts…,” the contents of the publication consisted almost entirely of humorous anecdotes and poems. 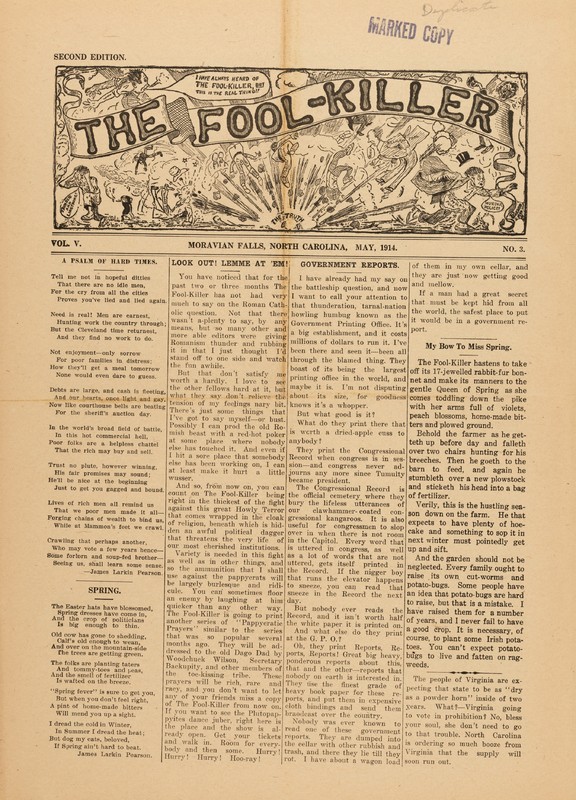 The Fool-Killer newspaper was the personal project of James Larkin Pearson, a Wilkes County native. Pearson summarized the newspaper as a “Pungent Periodical of Thrilling Thought.” The paper’s masthead depicted a bomb labeled “The Truth” blowing up a Drunken Fool, a Society Fool, a Religious Fool, and a Political Fool.” Pearson supported liberal economic and political views, and was also a prohibitionist. The Fool-Killer attained nationwide circulation. Most of the editorials and poems printed in the paper were composed by Pearson, who was later named North Carolina’s Poet Laureate from 1953 until his death. 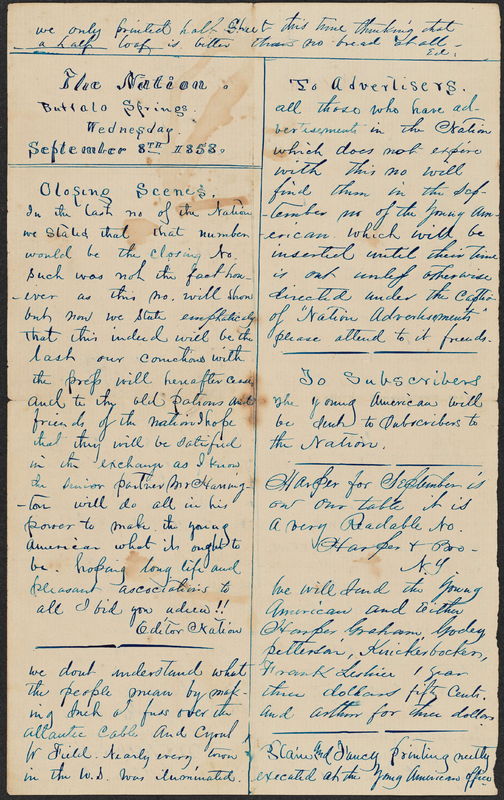 The Nation was one of several handwritten newspapers composed by John McLean Harrington, a teacher, clerk, surveyor, and sheriff of Harnett County, N.C. Harrington may have handwritten as many as one hundred copies of an issue. The masthead of the Nation announced that “with pleasure or displeasure to friends or foes we sketch the world just as it goes.” Harrington’s newspapers included poems, short stories, editorials, reports of national and international political and economic events and advertising by local merchants. This September 1858 issue announced that publication of the Nation was ceasing, but subscribers and advertisers were being transferred to another of Harrington’s handwritten newspapers, the Young American. 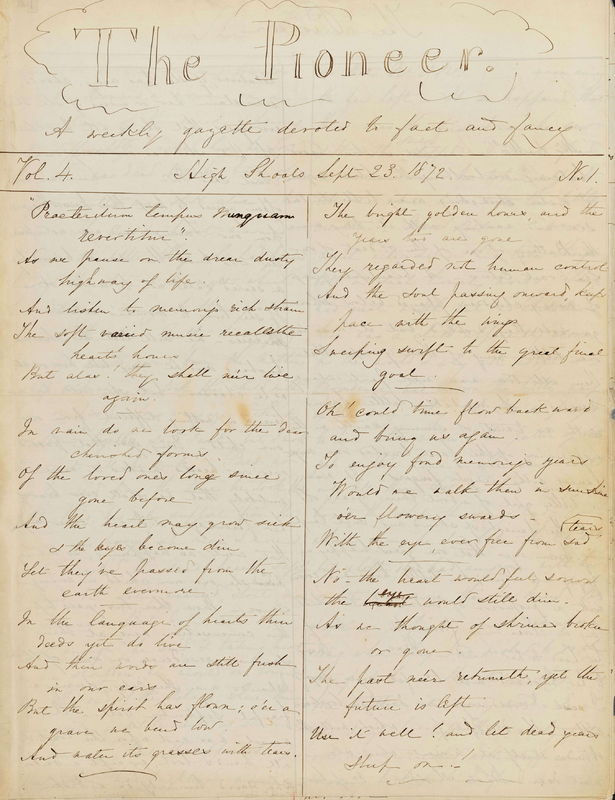 The Pioneer was a handwritten weekly publication issued from 1871 through 1873, possibly composed by the two daughters of Charles Wilkes (1798-1877), an American naval officer and explorer who lived in High Shoals in Gaston County. The masthead of the newspaper states that the Pioneer is “A weekly gazette devoted to fact and fancy.” The Pioneer contained poems, short stories, sometimes in serial form, meteorological notes and comments on fashions, local events, and Joe, a family dog.  It has been suggested that publication of the gazette was undertaken by the Wilkes family as a diversion from the hard times of the Reconstruction era in North Carolina.