Steam power, improvements to North Carolina's transportation networks, and the development of hydroelectric systems in the early 1900s led to a boom time for North Carolina industry. Factories making furniture, textiles, and tobacco products sprang up throughout the state. Labor newspapers fall into two categories: those that build community and consensus, and those that address workers' problems. Company-endorsed papers helped to build a sense of community among worker and plant communities. These papers would often share information about employee milestones, the company, and the community. Some featured advice columns. Due to North Carolina's historic resistance to labor unions, very few newspapers addressing workers' problems were produced by unions. Instead, worker community groups have been on the forefront of addressing employee issues such as race and gender discrimination, worker safety, and labor practices. 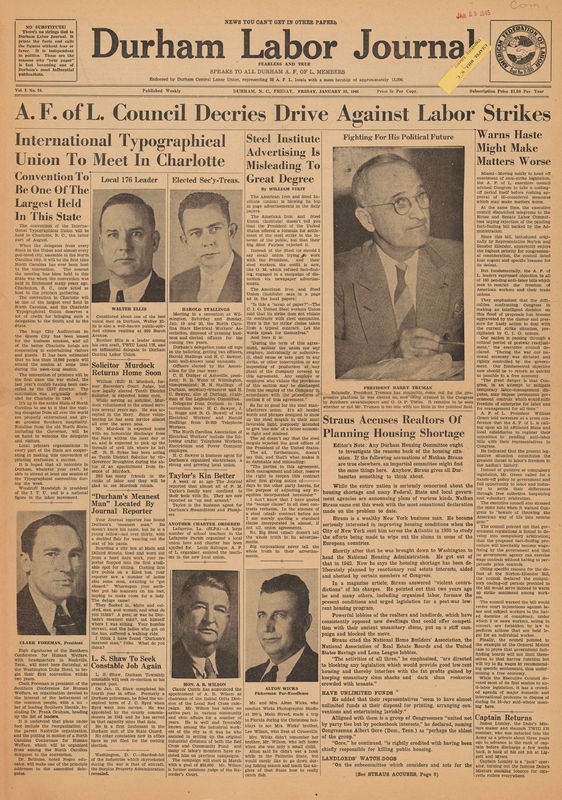 Produced by the Tobacco Workers International Union, the Durham Labor Journal claimed to “print the facts and call the figures without fear or favor.” The pro-union Durham Labor Journal kept readers up to date on local, state, and national union activities and strikes, legal legislation, and other unions or union supporting businesses. 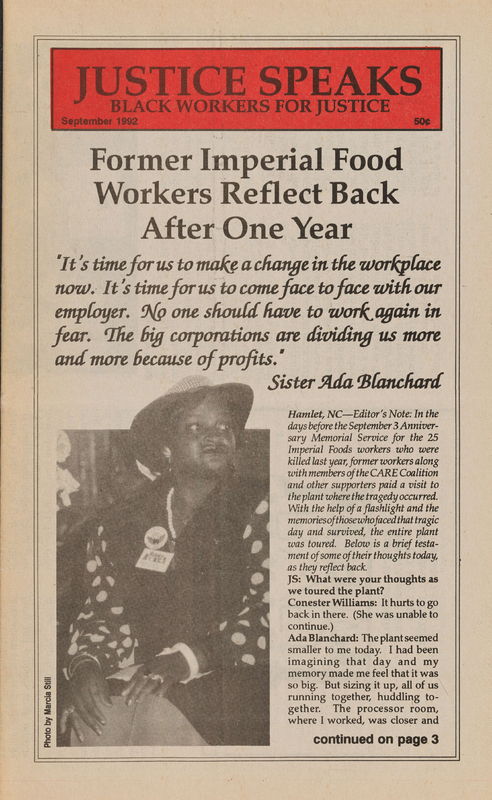 Justice Speaks, the newsletter of the Black Workers for Justice organization, highlights the African American worker’s experience in North Carolina. The organization formed in December of 1982 after an effort led by female Black workers to fight race and gender discrimination at a Rocky Mount K-mart store. This issue marked the one-year anniversary of the September 3, 1991 Imperial Foods plant fire in Hamlet, N.C. On that day, twenty-five people died due to locked, blocked, and poorly marked exits. The tragedy lead to renewed public discussions regarding worker safety and worker unions in the South. 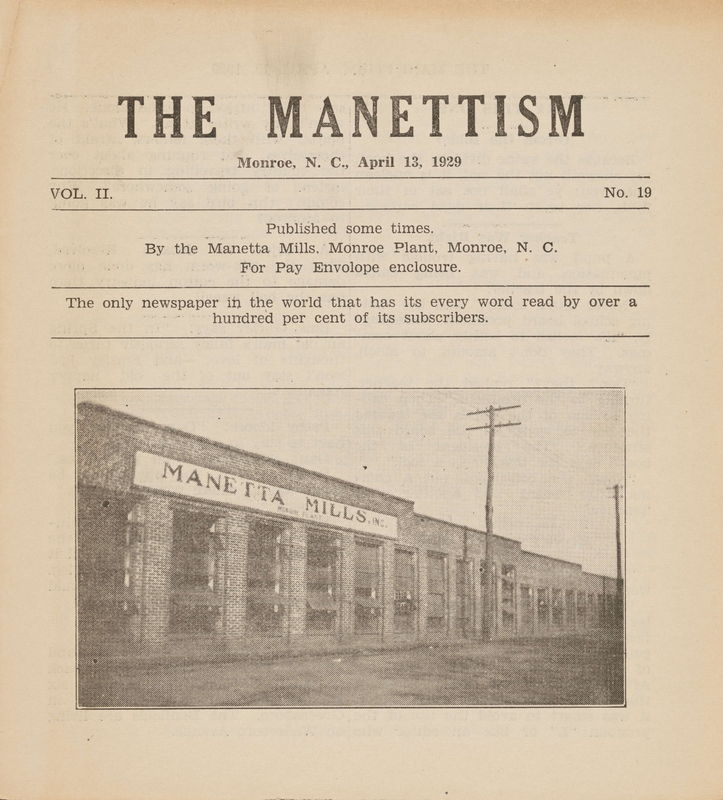 The Manettism provided news for the textile mill community at Manetta Mills in Monroe. The newsletter included a cover drawing or photo, jokes, and letters or articles by employee and community contributors about mill workers and community events. C.W. Walton, treasurer at Manetta Mills, printed the newsletter at his home press from the summer of 1927 until his death in 1938. The final issue in January 1939 is a memorial issue dedicated to C.W. Walton. Initially touted as published “some times” and later “usually twice each month,” the newsletter subscription cost was listed as “Just Let Us Know You Want It”. 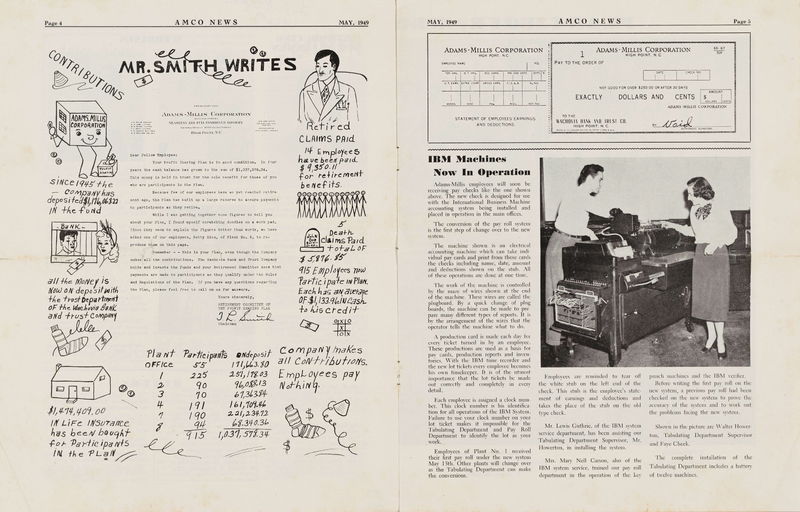 Due to improvements in transportation and technology, North Carolina saw a rapid increase in the number of textile mills in the early 1900s. In 1928, the Adams-Millis Corporation formed in High Point and became the largest private label hosiery manufacturer in the nation and fourth largest in the world. The mill employed thousands of people in various North Carolina towns. To help build a sense of community, the Adams-Millis Hosiery Mill produced AMCO News. The paper featured several regular columns, like “Aunt Matilda’s Corner,” with household advice, and “News Around the Plants,” reporting graduations, illnesses, and vacations.

Visit DigitalNC.org for more issues of the Amco News. 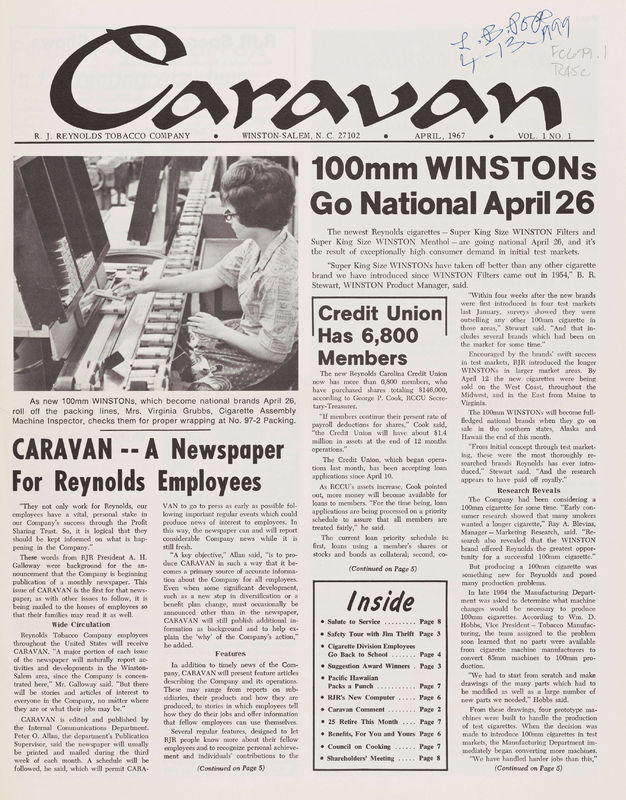 Before we knew about the harm tobacco products can cause, R.J. Reynolds Tobacco Company of Winston-Salem employed thousands of people throughout the United States in their tobacco plants. Starting in 1948, Camel Cigarettes, part of the R.J. Reynolds brand, sponsored the Camel News Caravan, one of the first national news programs. In 1967, Caravan became the company newspaper. The paper included regular features such as recipes from the Product Development Department’s test kitchen, reports from shareholders' meetings, and “A Salute to Service” highlighting employees with many years of employment.