North Carolina newspapers have promoted political parties and causes from late colonial times. Some larger newspapers in the state became proponents of the major political parties, such as the Raleigh Register and North Carolina Weekly Advertiser, which supported the Republican and later the Whig parties. Publishers and editors of smaller papers also used their publications as a mouthpiece for their political and religious opinions. They can be compared to today's radio and television political talk show hosts, such as Rush Limbaugh. The Yellow Jacket is an example. Other papers were less personal, but promoted environmental or countercultural causes, such as Green Line. Some, like the Landmark, were advocates of political personalities. All were in the business of influencing public opinion. 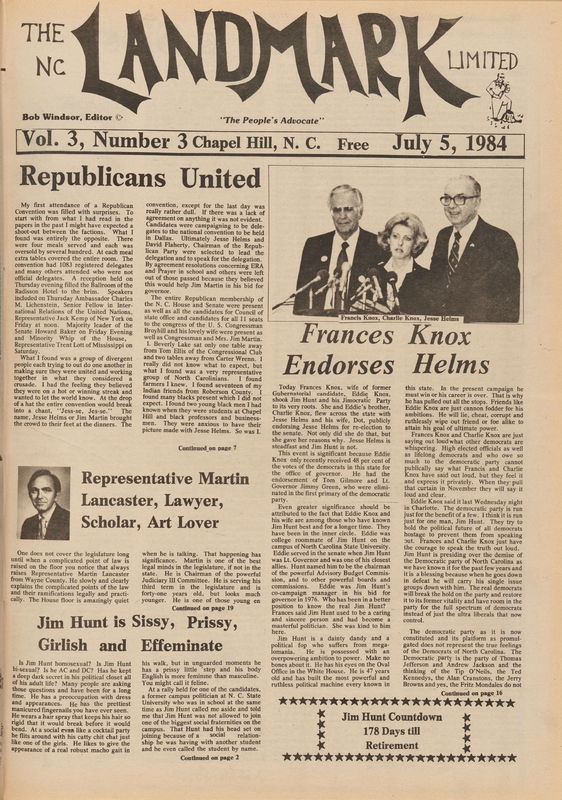 Bob Windsor, a flamboyant character who often dressed in bib overalls and necktie, worked as a land developer in Chapel Hill and Pittsboro. Windsor established Chapel Hill’s Windsor Circle (aka Glenn Heights) neighborhood in the mid-1950s. A political conservative, Windsor was a strong advocate of Senator Jesse Helms and used the NC Landmark Limited to support right-wing causes. In 1984, during Jim Hunt’s senatorial campaign against Helms, Windsor wrote “Jim Hunt is Sissy, Prissy, Girlish and Effeminate,” accusing Hunt of various homosexual activities. When the Hunt campaign threatened to sue, he withdrew the accusations and printed a retraction. 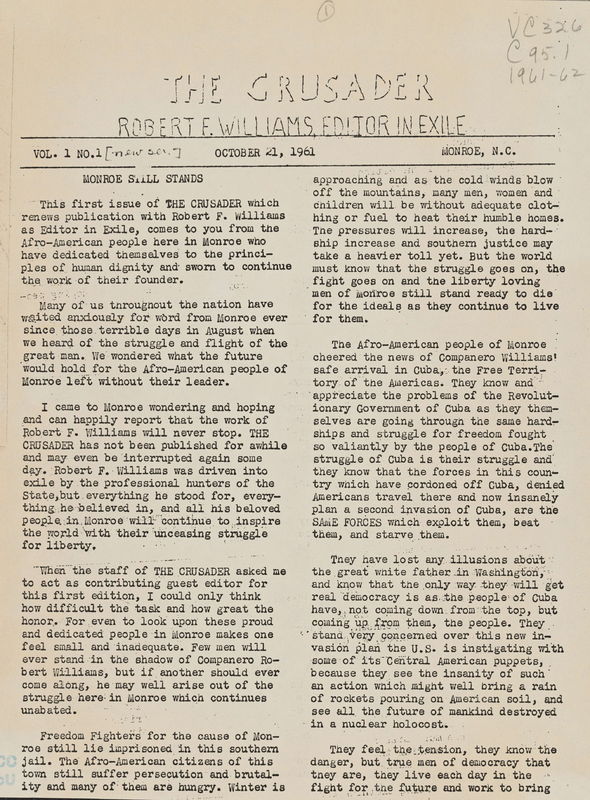 Robert Franklin Williams, an American civil rights leader from Monroe, served as president of the local branch of the National Association for the Advancement of Colored People (NAACP). When the outspoken Williams advocated armed black self-defense in the United States, his views received national attention and led to his suspension from the NAACP. He established the Crusader to "inform both Negroes and whites of Afro-American liberation struggles taking place in the United States and … Monroe.” Accused of kidnapping in an event associated with the Freedom Riders’ visit to Monroe in 1961, Williams fled to Cuba and later China. He continued to publish the Crusader from overseas. His writings and his book, Negroes with Guns (1962), were highly influential in black nationalism and the civil rights movement. 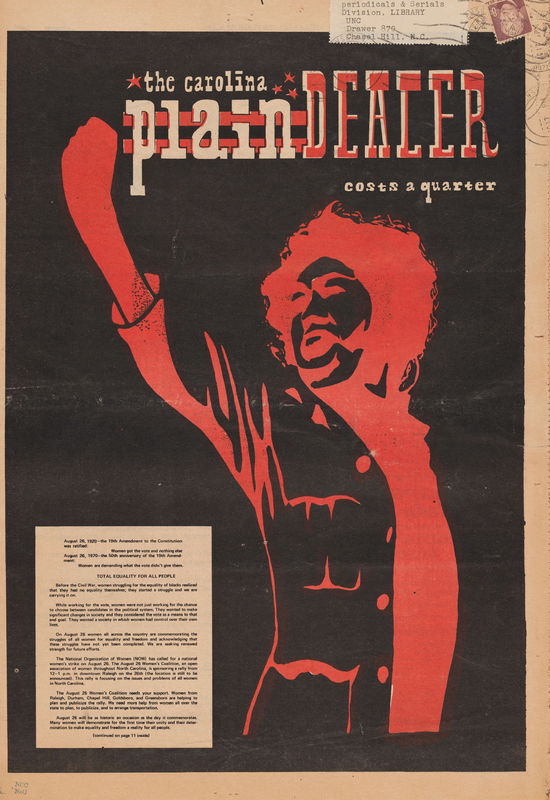 The Carolina Plain Dealer was an underground leftist political and alternative-culture newspaper based in Durham, published by a group of Carolinians who described themselves in the August 1970 inaugural issue as “active in the women’s movement, the GI movement, the student movement, the labor movement, the peace movement and the alternative culture.” Articles covered local and national political and social issues, such as the Vietnam War, abortion, drugs, the draft, and racial justice. 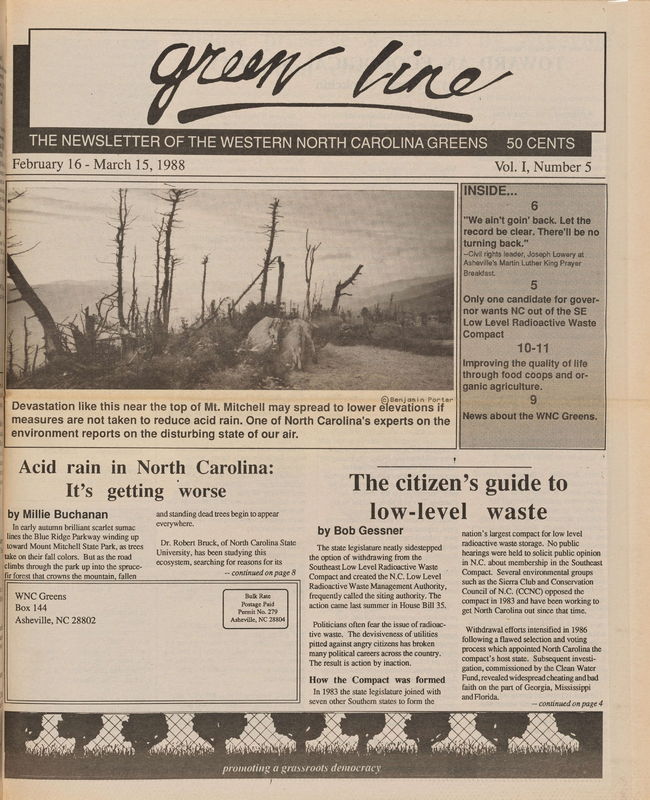 Calling itself “The Newsletter of the Western North Carolina Greens” for the Asheville area, Green Line promoted “green politics” including ecology, nonviolence, social justice, participatory grassroots democracy, gender equality, LGBT rights, and the end of war and racism. The publication provided in-depth coverage of controversial environmental and social-justice issues, such as clearcutting in the Asheville watershed and discrimination at the Biltmore Forest Country Club. Green Line became Mountain Xpress, which is still in publication. The newsletter continues to cover green issues, but also includes articles of broader cultural interest. 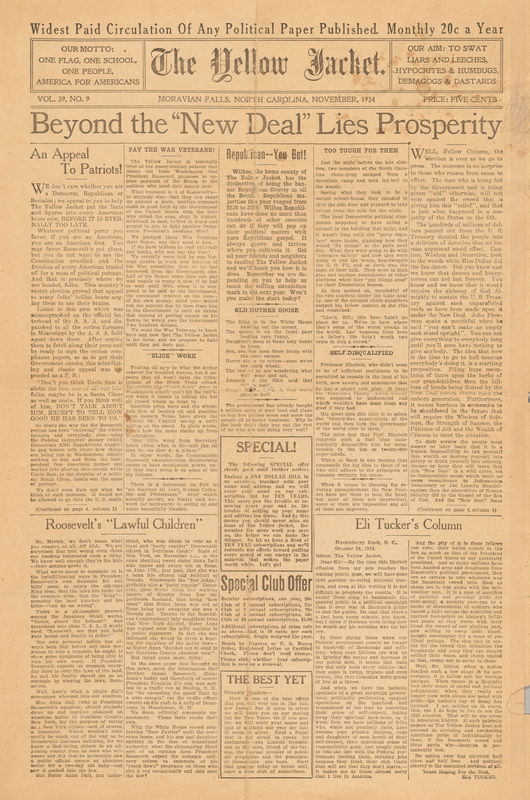 The largely self-taught Romulus Don Laws held sharply opinionated, pro-Republican views which were reflected in his newspaper, the Yellow Jacket. Located in tiny Moravian Falls, Wilkes County, the paper grew to a circulation of over 250,000 with readers in other states and some foreign countries. It was especially popular during the administrations of Democrats Woodrow Wilson and Franklin Roosevelt, whom he frequently criticized in the paper. A 1932 issue states “Our Aim: To Swat Liars and Leeches, Hypocrites & Humbugs, and Demagogs & Dastards.” There were longer articles, but the paper consisted mostly of brief political jabs called “Stingers,” and other satire targeting Democrats, Catholics, Socialists, the Labor Party, and others.