Although American youth have created their own newspapers and magazines since at least the early 1800s, the invention of several small and inexpensive presses in the late 1860s and early 1870s sparked a significant increase in amateur journalism. The term amateur journalism was used to separate the works of the young editors and publishers from those publications produced for profit. Amateur newspapers were generally four pages and included poetry, fiction, and news, often about other amateur publications. By 1876, the ranks of amateur journalists was great enough to support the formation of the National Amateur Press Association. North Carolina amateurs formed a statewide organization a year later. Several North Carolina amateur journalists, most of whom were male, rose to prominent careers in newspapers and politics. Josephus Daniels, the editor and publisher of the News and Observer of Raleigh, published several newspapers as a teenager. 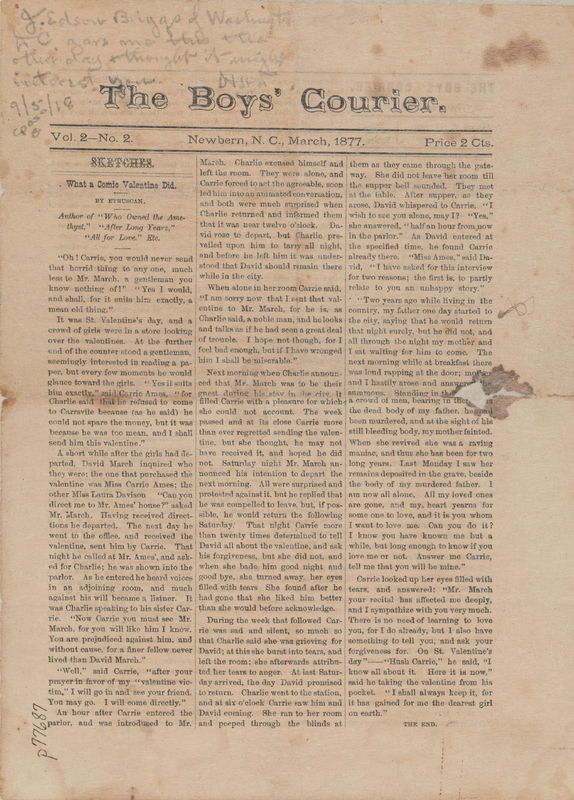 Amateur newspapers featured a mix of news, musings, short fiction, and poetry. In addition to other amateur journalists, their readers included members of the professional press. And, occasionally, those reporters and editors shared news of the doings of amateur journalists and their works. On August 26, 1877, the Observer of Raleigh shared a poem first published in the Boys’ Courier by a thirteen-year-old Raleigh girl. 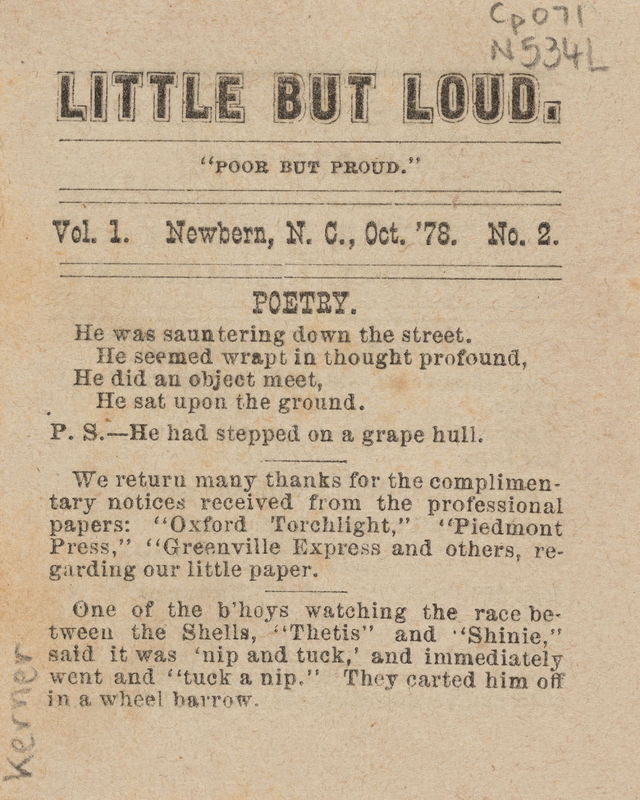 At 2½” x 2”, this issue marks the smallest newspaper held by the North Carolina Collection. And it’s possible that this particular issue is smaller than others published under this title. Upon receiving the first issue of Little But Loud, the Oxford Torchlight noted in its September 3, 1878 issue “This is the next to smallest paper we ever saw.” The paper reported the size of that issue as 3½” x 2¼”. The Torchlight did not suggest the name of the smallest paper. 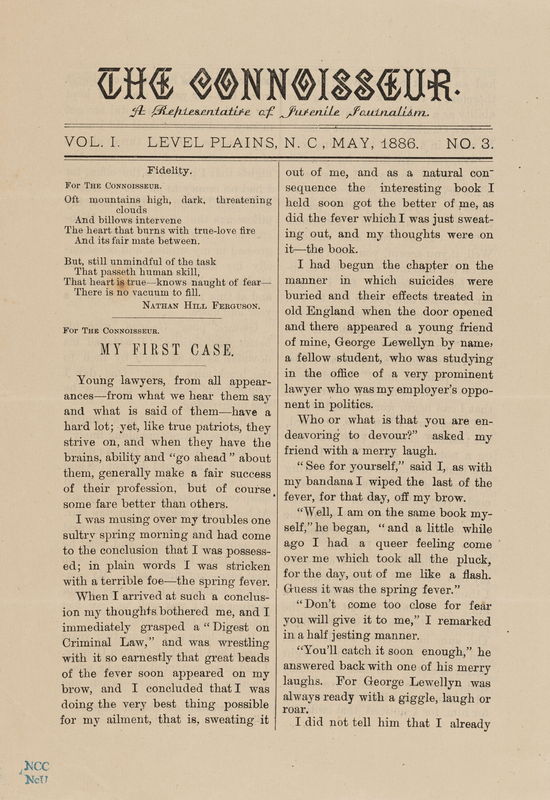 The Connoisseur: a representative of juvenile journalism, May 1886

Although amateur journalism is often associated with teenagers, adults who enjoyed writing also produced their own publications. Nathan Hill Ferguson was twenty-three when he published this issue of the Connoisseur. Ferguson filled the paper with his own poetry and prose as well as works by others. Ferguson farmed, taught school, and wrote poetry in Randolph County until his death in 1935. In 1972 his family published a collection of his poems. 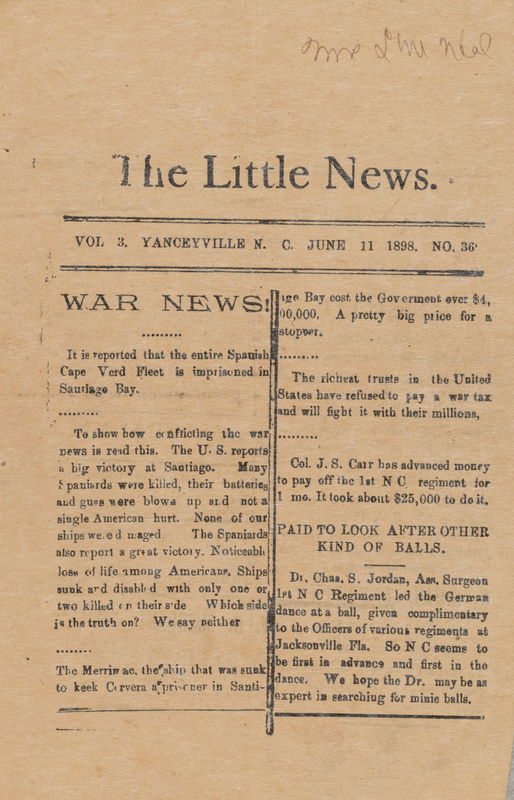 Thomas J. “Tom” Henderson was twelve years old when he published the first issue of the Little News in 1895. The publication featured local news and, occasionally, national news. The June 11, 1898 issue featured “War News” about the Spanish-American war. Henderson attended UNC-Chapel Hill from 1902 through 1904, and in 1908 he started the Sentinel, a weekly newspaper published in Yanceyville. The paper supported the Democratic party and its masthead described it as “Devoted to the upbuilding of the people of Caswell County.” After the newspaper folded, Henderson farmed, sold life insurance, and served as the postmaster for Yanceyville. He continued to write for newspapers and magazines, and in the 1940s he published several short books of his columns. 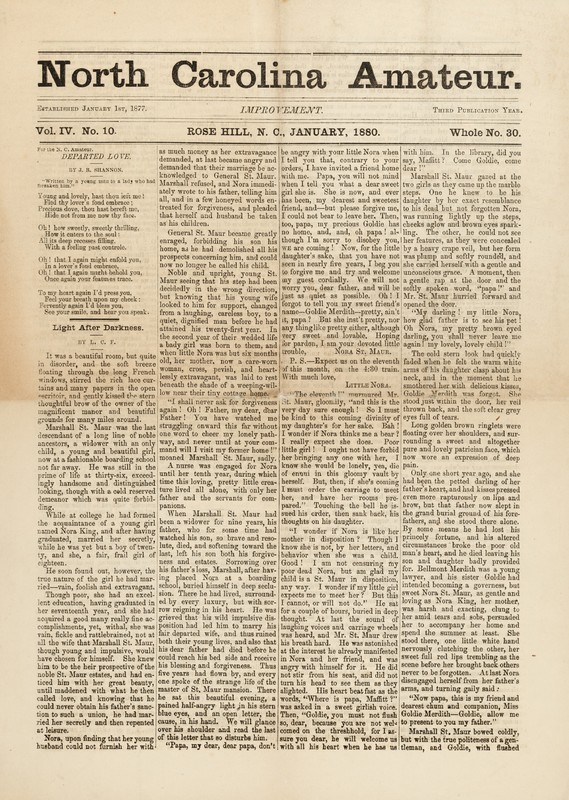 George Melvin Carr was sixteen when he joined with a friend to publish the first issue of the North Carolina Amateur in January 1877. Shortly thereafter Carr was elected vice president of the newly formed North Carolina Amateur Press Association, which held its first meeting in Goldsboro in June 1877. Carr was an active member of the amateur press community in North Carolina. As a young adult, he served as the editor of the Commonwealth of Scotland Neck, N.C. and contributed to the Goldsboro Messenger. He was editor of the Western Sentinel of Winston. Carr was working as a postal clerk for the Atlantic Coast Line when he died at the age of 27 in 1888. 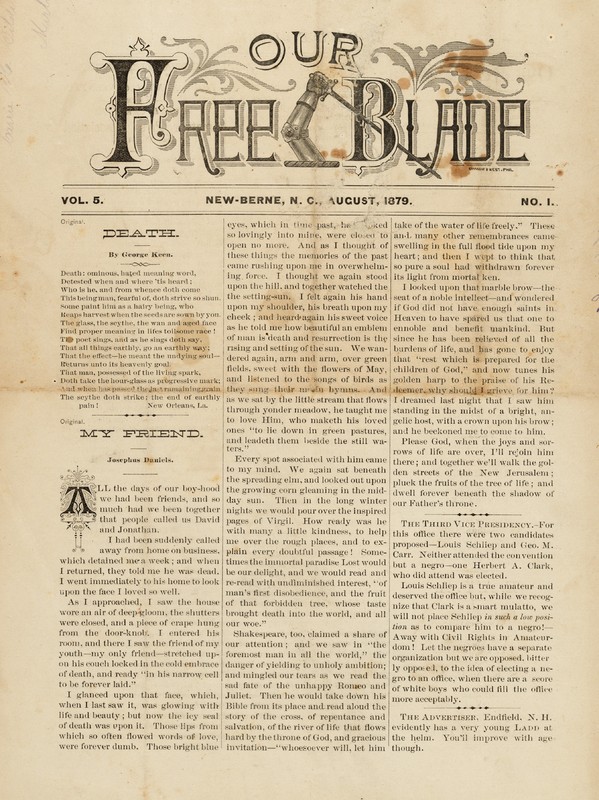 In 1879 James M. Howard and Josephus Daniels bought the year-old Our Free Blade from its founding publisher and editor. Daniels was a veteran of amateur journalism, having started Cornucopia with his younger brother and another teen in Wilson, N.C. in 1878. Daniels left Our Free Blade and amateur journalism in 1880 to become editor of the Advance of Wilson. He eventually bought the newspaper. Daniels bought and sold several other North Carolina titles before purchasing the News and Observer of Raleigh in 1894. That newspaper served as Daniels’ mouthpiece to promote the state Democratic party and its views, which in the late 1890s included disenfranchisement of African Americans and passage of Jim Crow laws. This edition of Our Free Blade foreshadows those views with its criticism of the selection of Herbert A. Clarke (misspelled as Clark), an African American from Ohio, as an officer in the National Amateur Press Association. 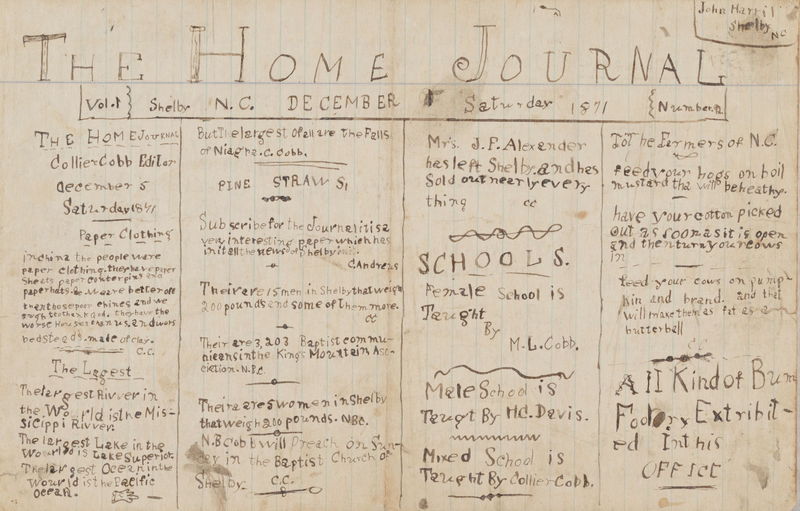 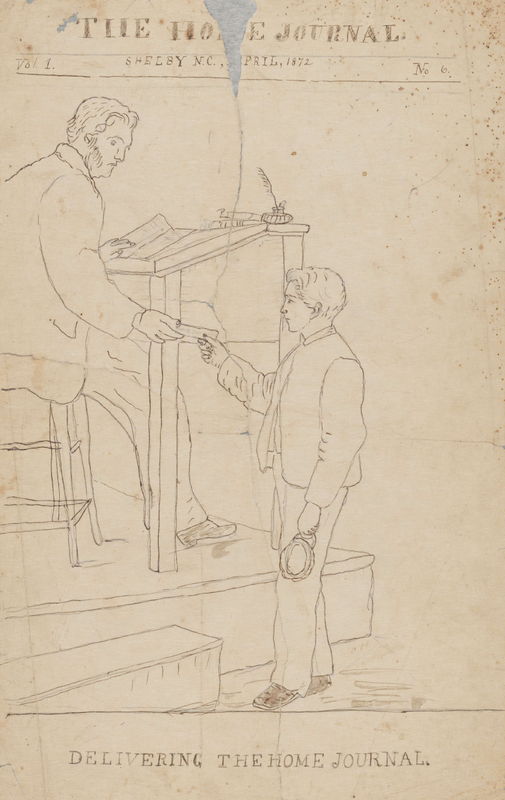 Collier Cobb’s Home Journal predates common usage of the term amateur journalism. Cobb was age nine when he handwrote and illustrated the first editions of his paper. Cobb printed later editions of the Home Journal on a press given him by a relative. He sold subscriptions to his paper for 50 cents a year. As a young adult, Cobb taught school in several North Carolina towns before earning a geology degree from Harvard. He was hired as a geology professor at UNC-Chapel Hill in 1892 and remained in Chapel Hill until his death, at the age of seventy-two, in 1934.

Shown are a handwritten edition, December 1871, (top), and an illustration for Home Journal, April 1872