Surely this traffic cannot be good, which spreads like a pestilence, and taints what it touches!

The transatlantic slave trade is the umbrella term for the 300-year triangular pattern of ship routes which included the forced movement of enslaved people from Africa to the Americas, the shipment of raw materials from the Americas to European manufacturing centers, and the return of finished goods from Europe to Africa. In the United States, we often cite the arrival of the first enslaved Africans in Virginia in 1619 as the beginning of the Black experience in this country. 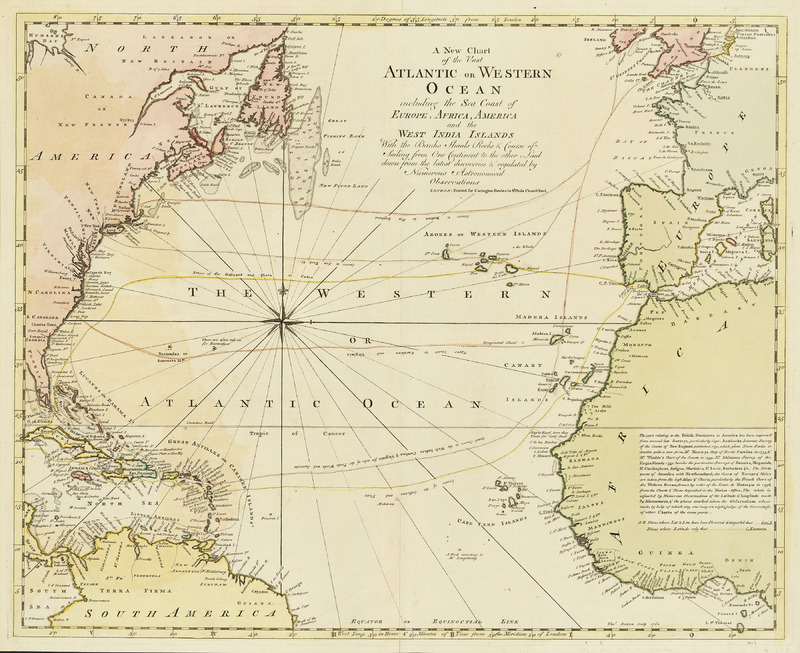 A new chart of the vast Atlantic or Western Ocean

This map depicts trade routes across the Atlantic ocean, known as the Middle Passage. The coasts of Europe, Africa, America, and the West Indies are all critical sites for the transatlantic slave trade. Many historians and artists have reflected on the horror of the Middle Passage, which is noticeably absent from the work of most 18th century cartographers. As we trace our fingers across the map imagining an expanded view of our world, it could be easy to forget that enslaved mothers, fathers, and children, not commodities, lived and died on those ships.

This diagram shows Brookes, a British slave ship designed to hold 454 slaves, though it often sailed with more, traveling between Liverpool and Africa’s Gold Coast, and on to Jamaica. This configuration calls for about 6 square feet per adult and 5 square feet per child. For comparison, the average college dorm room is 130 square feet. It is hard to imagine 20 people lying on the floor of a dorm for five minutes, let alone for two to three months on a journey across the ocean. 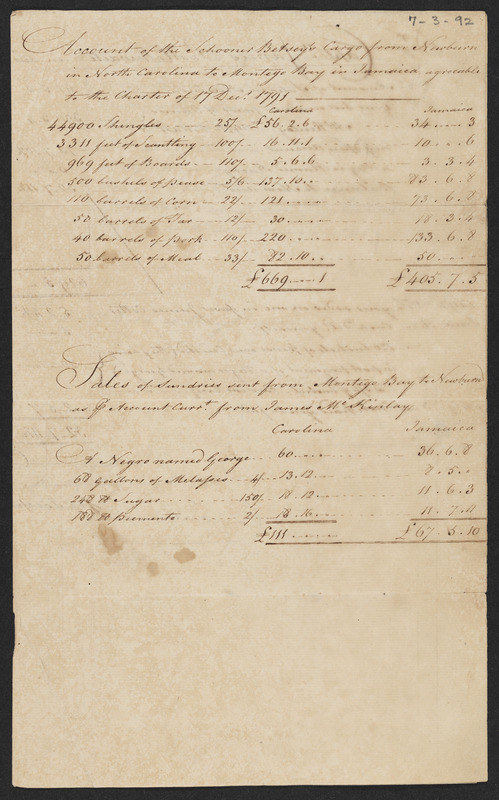 Accounts of the schooner, Betsy, 1791

Like this account book from the ship Betsy, most records documenting the slave trade in the 18th century are devoid of traces of the humanity of the cargo. Many slaves traders in the Americas and the Caribbean took the enslaved Africans through a process called “seasoning,” designed to degrade and strip the individuals of all ties to their homelands, starting with their names. Betsy’s log shows this process with the documented transfer of a man named George from Montego Bay in Jamaica to New Bern, NC on Betsy. He was purchased for £60.00, equivalent to approximately $9,000 in 2019.

These port records were kept by future U.S. Supreme Court Justice James Iredell, Sr. (1751–1799). Between 1768 and 1776, Iredell worked as the deputy customs collector for the Port of Roanoke in Edenton, NC. Port Roanoke was one of five official points of entry and served most of the Albermarle settlement. In this role, Iredell would have inspected ships filled with human cargo, recorded the conditions on board, and collected money from the ship’s captain.

In these two volumes we see clear accountings of the import and export patterns at the Port of Roanoke in January 1774. Line 9 of the “imports” ledger records the ship Nancy arriving from Tobago with ten Negroes on board. Line 13 of the “exports” ledger shows Nancy headed to Barbados with foodstuffs and lumber. Exports of goods to Cadiz, a port city in Spain, complete the third leg of this triangular trade. The well-worn path of slaves and supplies from the Caribbean to the Americas is clear. 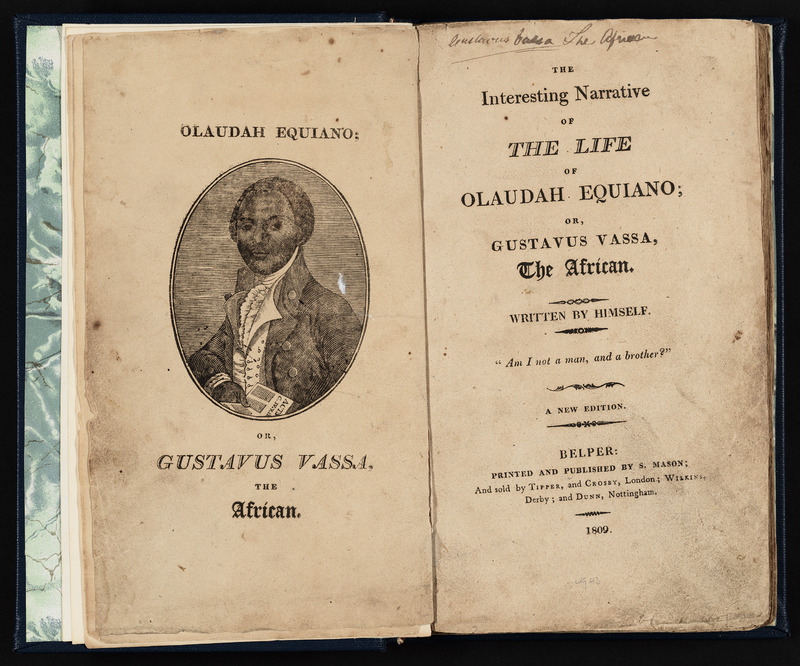 In this personal narrative, Equiano gives an account the sensory experience of being held captive on a slave ship being delivered to the Americas. Although Equiano’s narrative is designed to convince the dominant class that the slave trade is evil and should be stopped, this exhibit demonstrates the outcomes of not heeding his warnings. Tearing families apart, denying people their dignity, and actively preventing individuals from reaching their full potential are ways that the African American experience has been “tainted” from slavery until now. 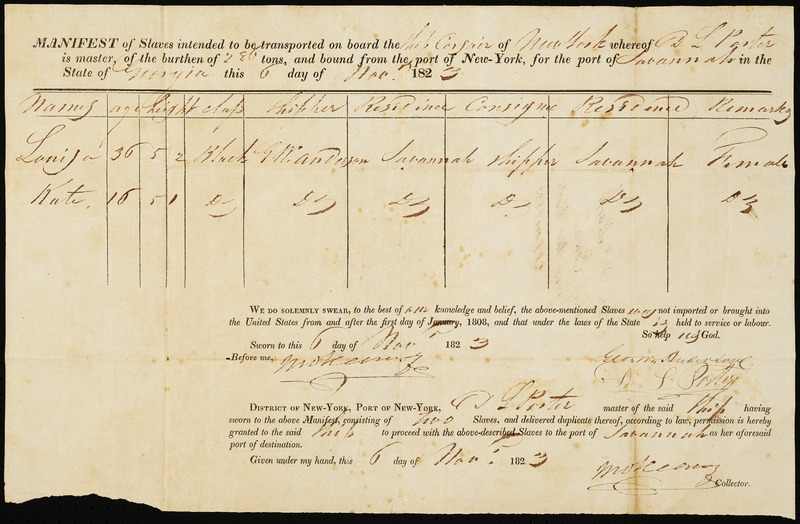 This manifest from 1823, printed with blanks for ship captains and collectors to fill in their particular details, demonstrates that these types of transactions occurred frequently. The stock language includes an oath that these enslaved women, Kate and Louisa, were not imported from another country. The 1807 Act Prohibiting Importation of Slaves was proposed by President Thomas Jefferson to end the human suffering caused by the international slave trade and took effect on January 1, 1808. The journey from New York to Savannah almost certainly ensures that these young women were being sold away from their homes and families. 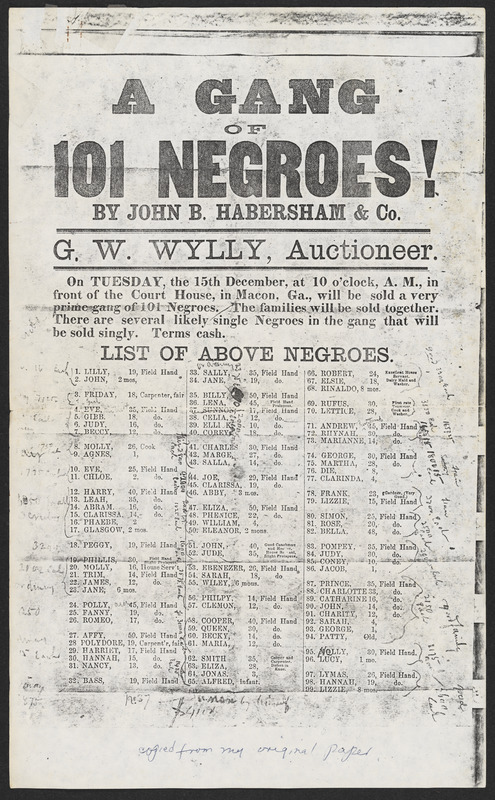 It is unclear whether the Havens and Bonner families kept this advertisement because they were trying to buy or sell enslaved people, or why they were engaged in either practice in Macon, GA, hundreds of miles away from their own plantations near Washington D.C. and Portsmouth, NC. While the largest sales happened around port cities like Savannah, GA, Charleston, SC, and St. Augustine, FL, smaller slave markets existed throughout the Southern states. Slave traders like G.W. Wylly made a fortune selling enslaved individuals around the region and Black families paid the ultimate price.