I drew aside the window curtain, to take a last look of my child. The moonlight shone on her face, and I bent over her, as I had done years before, that wretched night when I ran away. I hugged her close to my throbbing heart; and tears, too sad for such young eyes to shed, flowed down her cheeks, as she gave her last kiss, and whispered in my ear, ‘Mother, I will never tell.’ And she never did.

Following the first Fugitive Slave Act, passed by the U.S. Congress in 1793, until the 13th amendment abolished slavery in the United States in 1864, African Americans found ways to liberate themselves. The laws and practices designed to capture self-emancipated individuals and return them to slavery were severe enough to make running away a deadly proposition for enslaved communities. The individuals who escaped were willing to risk being maimed, raped, or the torture of their loved ones to be free of bondage. 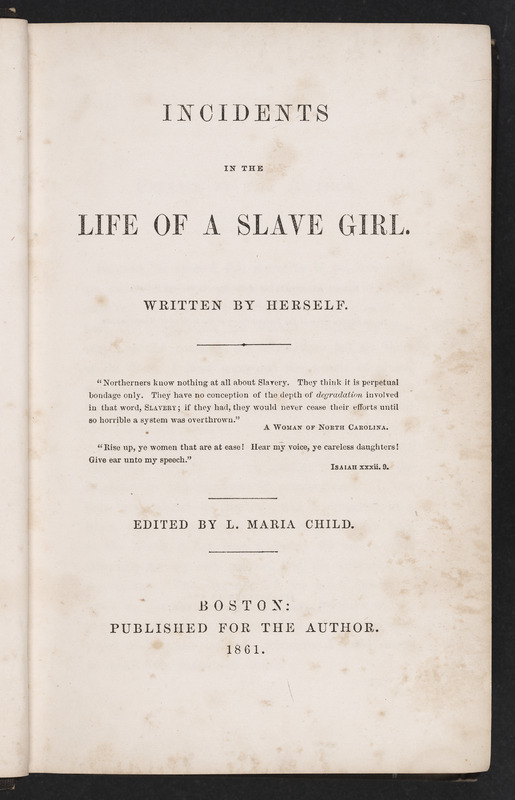 Incidents in the Life of a Slave Girl

Harriet Jacobs’ autobiography, Incidents in the Life of a Slave Girl recounts the incredible love and sacrifice that one woman makes due to the horrible conditions of her enslavement. Starting in 1835, Jacobs’ spends seven years in a crawl space above a store room to be near her children. In 1842, she describes her last moment with her daughter before making her way out of Edenton, NC and living the tense existence of a runaway slave in New York, as her owner never stopped looking for her. 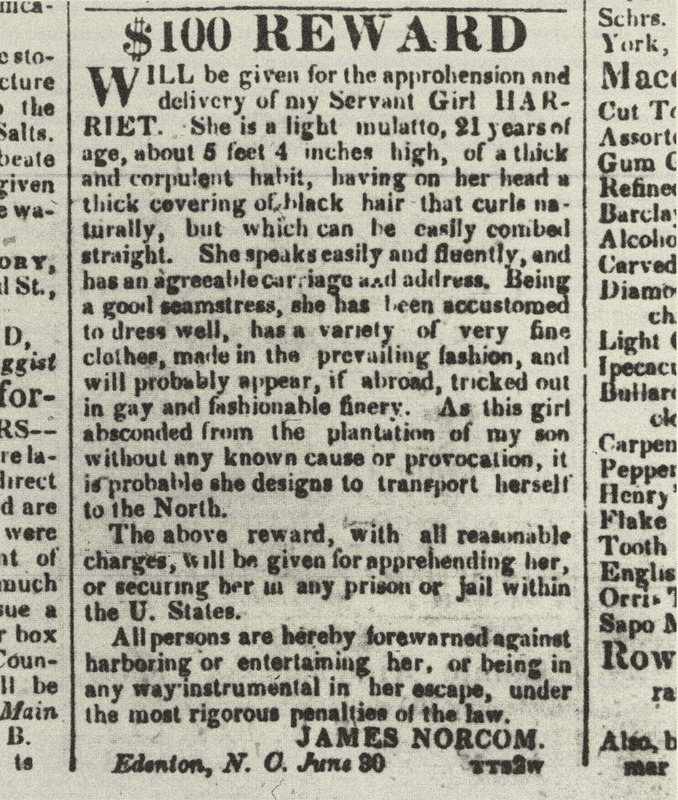 “$100 reward“ advertisement for the capture of Harriet Jacobs

This “$100 reward“ advertisement for the capture of Harriet Jacobs was originally published in the American Beacon (Norfolk, Va.), July 4, 1835. The original document is held by the North Carolina Office of Archives and History, Raleigh, N.C. This image is reproduced from The Harriet Jacobs Family Papers, Volumes 1 and 2, edited by Jean Fagan Yellin.

This image of Harriet Jacobs in her early 80s is one of the only formal portraits known to exist. After escaping bondage, she settled in the North and was eventually reunited with her children and her brother. When Jacobs’ autobiography was published in 1861, she became a popular figure in abolitionist circles. In addition to her work and speaking engagements, she and her daughter contributed to relief efforts for Union soldiers. After the Civil War, she supported literacy work for the newly Freedmen and helped to set up a school in Alexandria, Virginia.

Image reproduced courtesy of the State Archives of North Carolina 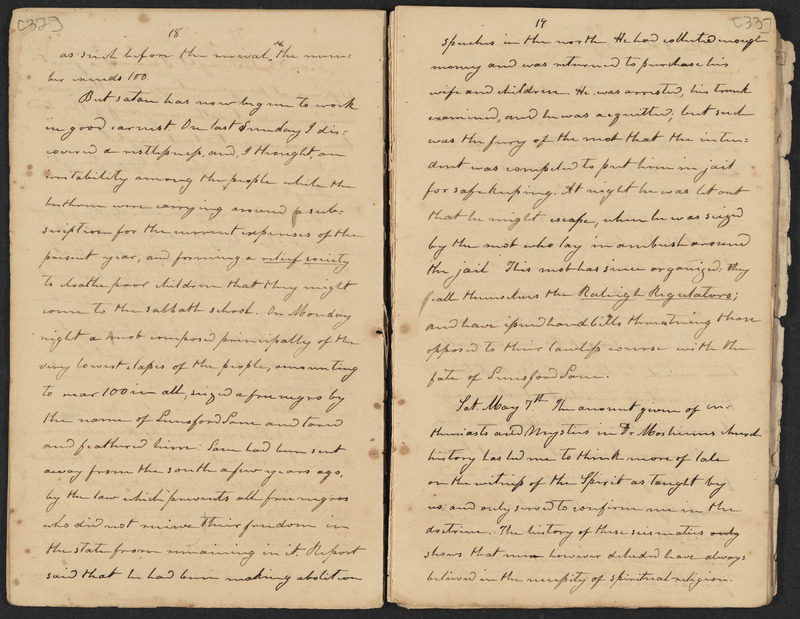 Running was not the only way that enslaved people could emancipate themselves. Though often a long and arduous task, thousands of enslaved people were able to buy their freedom before the Civil War. The experience of Lunsford Lane, however, provides a gruesome example of the ongoing dangers of the process. Lane, a free Black man and an advocate for the abolition of slavery, attempted to buy the freedom of his wife and children but was attacked for his perceived audacity. His lynching is detailed in this firsthand account by Sidney D. Bumpas, a Methodist minister living in Raleigh, NC at the time. 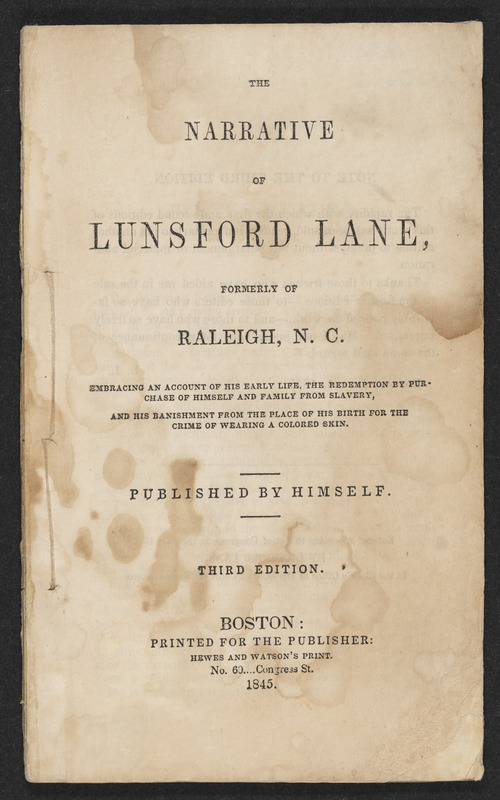 The Narrative of Lunsford Lane, Formerly of Raleigh, N.C. Embracing an Account of His Early Life, the Redemption by Purchase of Himself and Family from Slavery, and His Banishment from the Place of His Birth for the Crime of Wearing Colored Skin

Lundsford Lane’s autobiography highlights the contradictions of slavery as a legal institution and the depth of anti-Black racism in the United States. In Lane’s world, a man could legally buy his freedom but could not live freely alongside his family members without the threat of violence. Ultimately, this threat came to fruition with Lane’s lynching. 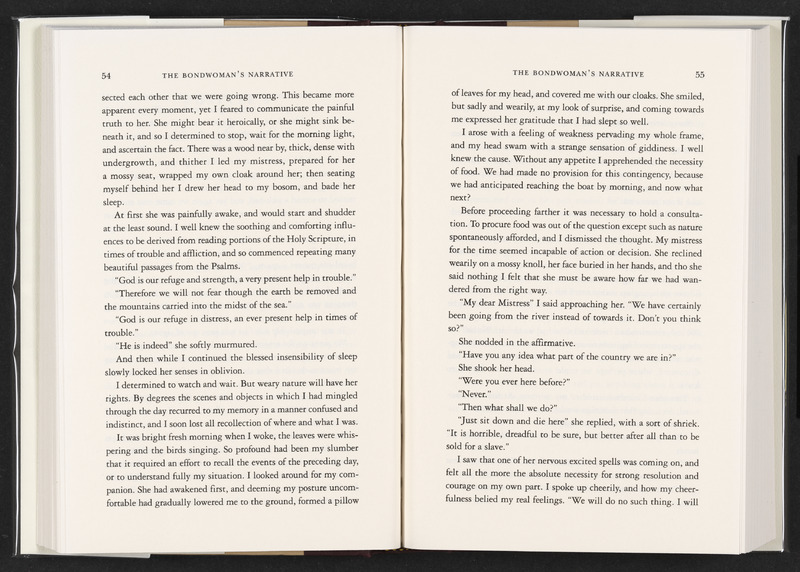 It is thought that Hannah Crafts is a pseudonym used by Hannah Bond, an enslaved woman who escaped from a plantation in Murfreesboro, NC, in 1857. In this novel, believed to be semi-autobiographical, Crafts describes the constant physical and emotional terror of life on the run, including going days without eating, the threat of capture and return to the plantation by slave traders, and the need to remain on guard against anyone that she encountered. 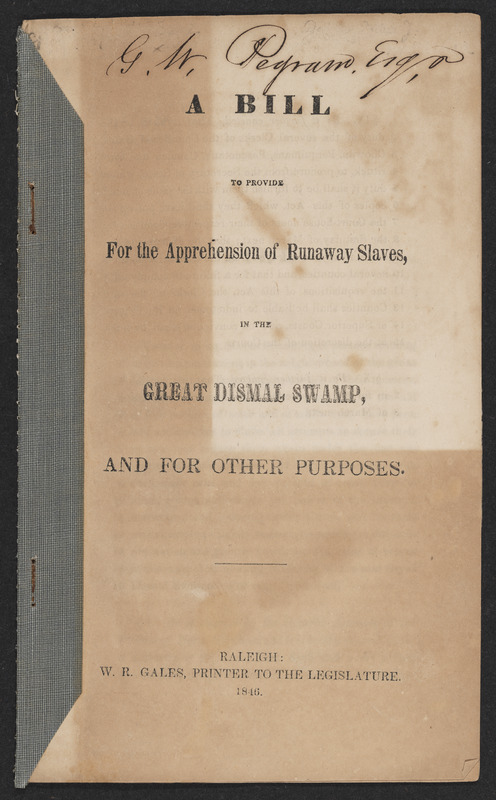 A Bill to Provide for the Apprehension of Runaway Slaves, in the Great Dismal Swamp Bill, and for Other Purposes

This bill was passed by the North Carolina General Assembly in 1846 to prevent runaway enslaved persons from taking refuge in the Great Dismal Swamp. The swamp, which was too muddy for horses or canoes and full of snakes and mosquitoes, became the home to “Maroons” who escaped slavery from North Carolina and Virginia. Slave holders were so afraid of the influence these Maroon communities would have on the enslaved African Americans that Section 3 of this bill states that any slave found near the swamp could be arrested and sentenced to receive 39 lashes on his or her bare back, and the white person that let this enslaved person wander would have to pay a $25.00 fine. 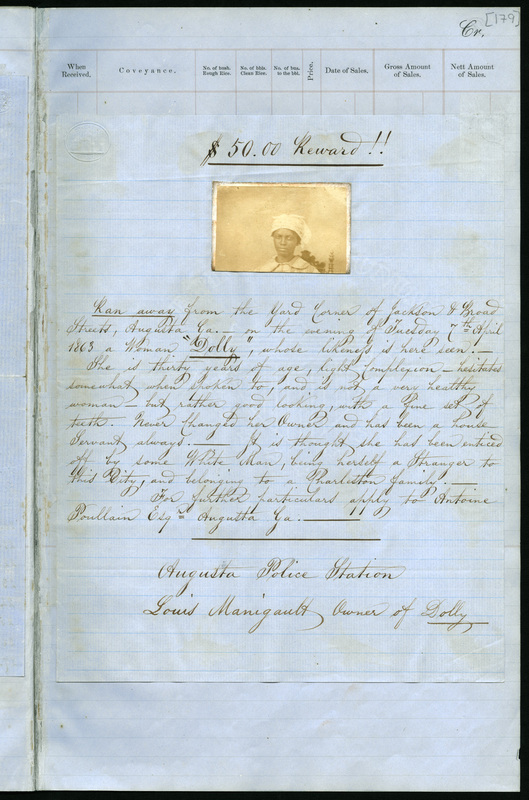 This advertisement for Dolly, a runaway slave, is one of the most striking items in the Southern Historical Collection. The ad shows that the slaveowner knows Dolly well enough to describe her mannerisms and physical attributes, places the blame her for leaving on a white man who has enticed her, and is willing to pay a large amount ($50.00) for her return. The description raises ominous questions about the risk posed to the “rather good looking” Dolly, and the heightened dangers she would have faced by escaping with her photograph on file. 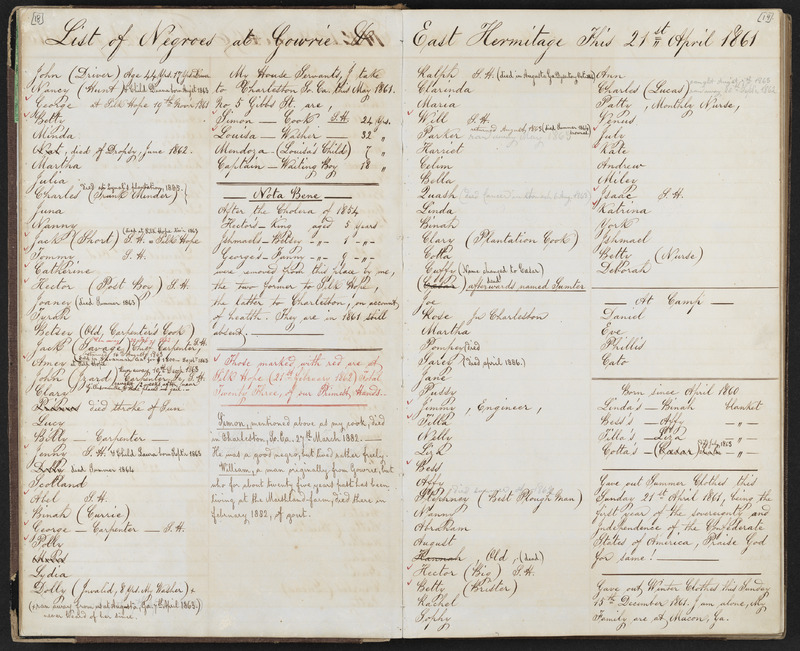 In 1861, Dolly is enigmatically listed as an eight-year old washer invalid. The entry is amended to record her escape on April 7, 1863. Other escapes from the plantation include Jack, the chief carpenter, who ran away February 20, 1862, came back under unknown circumstances, and was sold in September 1863 for $1800; John Izard, another carpenter, who ran away in December 1863; and a man named Charles who ran away in 1862. The four runaways listed on these two pages indicate that the desire to leave the enslaved life was strong. Alongside these shocking, but surely not atypical, matter-of-fact entries of human property is praise for the Confederate States of America - an entity designed to keep enslaved people in bondage. Against this Civil War backdrop, the individuals depicted so flatly on these pages paid active attention to their surroundings and seized opportunities to escape when they arose.