The women’s suffrage movement in North Carolina gained momentum in the summer of 1913 when white women began organizing local suffrage leagues in numerous cities and towns. By the fall of that year a statewide organization was born: The Equal Suffrage League of North Carolina (ESLNC). The creation of these groups represented the first significant advancements for the women’s suffrage movement in North Carolina since 1894, when the first statewide suffrage association was formed in Asheville but languished for lack of support.

From 1914 to 1920 the new organizations made significant progress educating the populace and building support by organizing lectures by prominent suffrage leaders, writing and speaking to state legislators, sponsoring a booth at the NC State Fair, and distributing pro-suffrage literature. 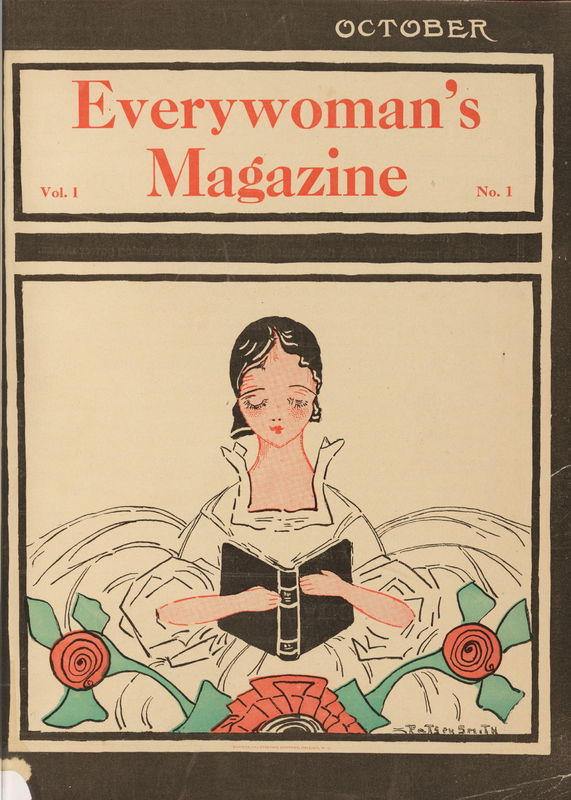 The first issue of this magazine contains a section covering women’s suffrage news and an article by UNC professor Archibald Henderson titled “Why Men Want Votes for Women.” Henderson states “Men want votes for women to enable women to free themselves from the shackles of economic and sex dependence.” He points to numerous famous men who have supported women’s rights, including Abraham Lincoln, William J. Bryan, and writer Bernard Shaw. 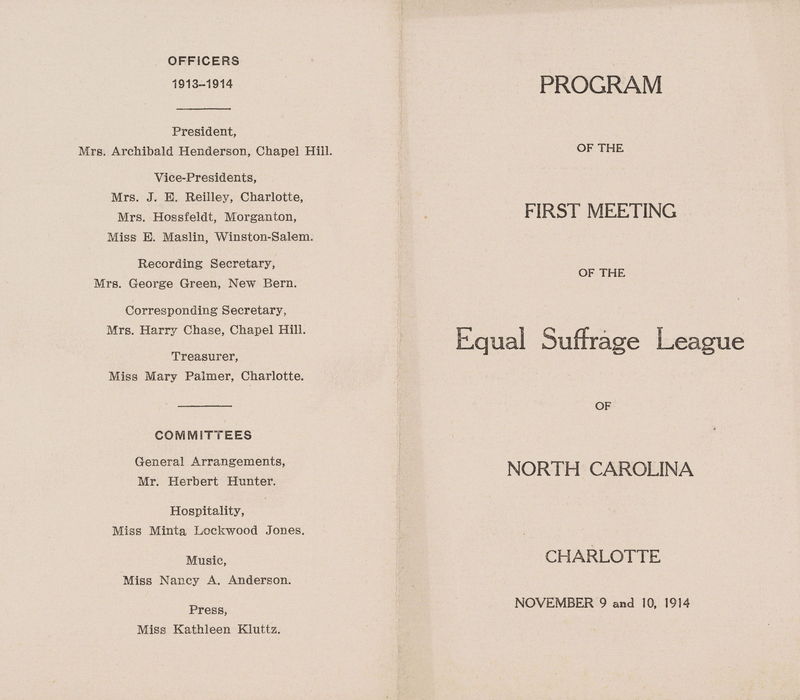 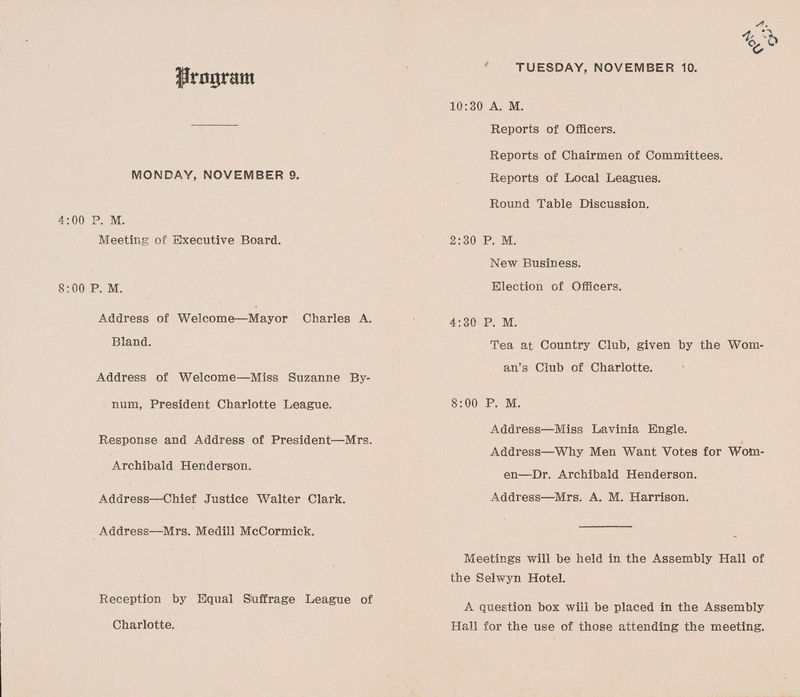 Program of the First Meeting of the Equal Suffrage League of North Carolina, 1914.

The 1914 meeting brought together the members of the statewide and local leagues. The evening address was made by Lavinia Engle, a suffrage campaign coordinator for the NAWSA. 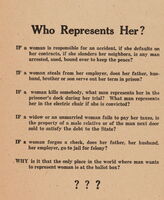 The fliers displayed here represent just a small fraction of the literature circulated by suffrage organizations in North Carolina. These fliers emphasize women’s need to protect their own rights and to have a say in the laws governing them. They also argue that it is the duty of everyone, men and women, to help build a better government.

Leaders of the state’s movement and other supporters wrote articles for newspapers and magazines arguing for women’s suffrage. 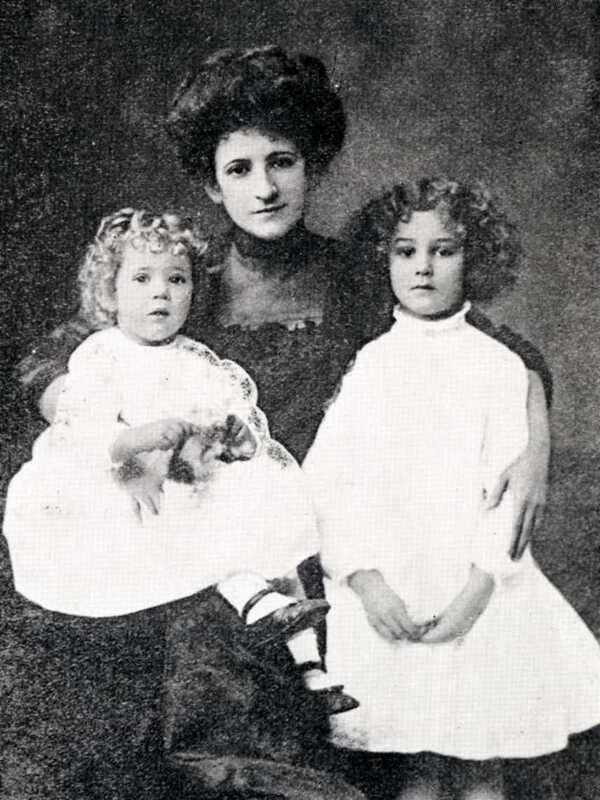 Anti-suffragists often portrayed suffragists as either radical feminists or as housewives who neglected their husbands and children. Barbara Henderson, who led the Equal Suffrage League of North Carolina from 1913 to 1916, is shown here with two of her children in this feature article about her involvement in the movement.

To discredit anti-suffragists' arguments, McGehee portrays Henderson as a model housewife and mother, with many “ladylike accomplishments.” Because she was an upper middle class woman like most other southern women's suffrage leaders, the advantage of having servants allowed her to take a leadership position and travel to attend meetings. 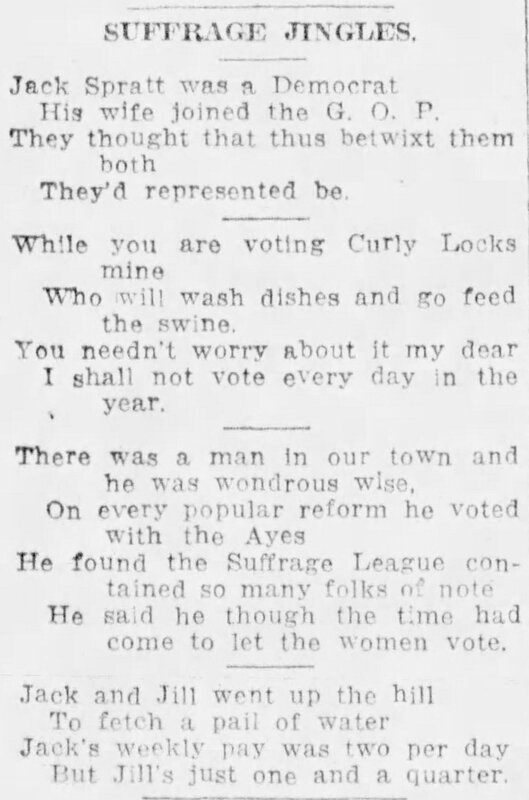 The "Curly Locks" jingle satirizes the argument made by anti-suffragists that once women had the vote they would neglect their household duties. Another jingle points to the problem of women receiving less pay for the same work as men, an issue that rose to the forefront of the debate on the Equal Rights Amendment in ensuing years.