Tar Baby, published in 1917, was the first in a series of campus humor magazines. For the next several decades, other imprints devoted to humor came and went, although some would be revived for short periods of time after their initial runs. Many of the early comedic offerings were professionally printed on glossy, high-quality papers. Nevertheless, all eventually closed either due to student indifference or to community criticisms of their alleged risqué or low-brow content. After the demise of Tarnation in 1947, very few humor magazines survived past a few issues. 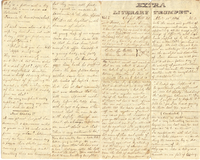 Published as an "Extra" to the Literary Trumpet, this broadside is the only number of the publication that remains. It is a single sheet of paper, handwritten on both sides. The contents are mostly short, humorous essays and jokes. The longest piece is a satire entitled "Early Reminiscences of C. Hill" which relates that "After the organization of the institution the first care of the trustees was to procure a proper victualler for the boys: and the secondary care was as a matter of course, an appropriate faculty." 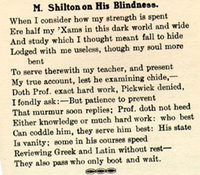 This magazine contains cartoons, jokes, and occasional commentaries on Carolina sports. This appears to be the first in a long line of campus humor magazines. The Tar Baby first ran from 1911 to 1912 and was resurrected under the same name in 1919, running until 1921. Issues in the second series consisted primarily of short jokes and cartoons, including contributions from other universities' humor magazines. Thomas Wolfe appears as a member of the advisory board for the first few issues of the second series. 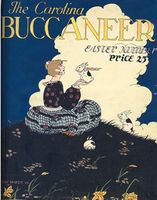 The Buccaneer remains the longest-running of the humor magazines. Beginning publication in 1924, it contained jokes, cartoons, and advertisements. Each issue was devoted to a theme, for example, the “pirate’s issue,” the “football issue,” and the “commencement issue.” From its inception, the Buccaneer published slightly risque material, but by 1934 was considered by some a magazine of “dirty jokes.” Students and faculty repeatedly objected to the magazine’s content over the years, and the November 1939 issue was considered so offensive all copies were destroyed and the magazine was abolished.

Published under the auspices of the Sigma Upsilon National Literary Fraternity. This paper, which the editors proclaim "will give publicity to the true state of affairs on the campus" and "will razz those men who deserve to be razzed" was published "whenever a state of affairs [came] about on the campus that such a paper [was] needed."

The Yellow Journal consists of satires on campus life, the Playmakers, faculty and administrative figures, fraternities, and a large number of what seem to be personal or inside jokes. Nearly one entire issue is devoted to news and jokes about a student named Ed Hudgins. 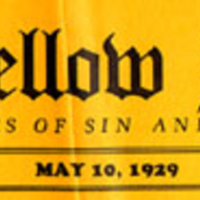 Masthead from the front page of the May 10, 1929 issue of The Yellow Journal. 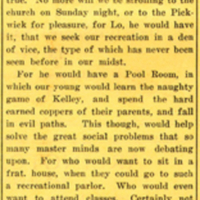 Article from Vol. 1 no. 2 of The Yellow Journal, which was undated.

Tarnation, which premiered in 1947, was published sporadically for seven years. An editorial in the first issue proclaimed that Tarnation would be more than just a humor magazine; it would contain “straight” articles as well. The magazine’s publishers also said they would abstain from printing dirty jokes or offensive covers in an effort not to fail as the Buccaneer had. Nevertheless, some readers roundly objected to Tarnation’s humor. The magazine struggled along until 1954, when it ceased publication due to lack of student interest.

Cartoons from the April 1958 issue of the Ram and Ewe. They appear under the heading "Campus Types."

"The purpose of this magazine is to provide for the general student body a publication devoted to the expression of the humorous and lighter side of campus life, with occasional searching forays into the fields of clever satire and adept allegory." It includes humorous articles dealing with such subjects as "Campus Types" and sorority stereotypes. There are a few mock advertisements and jokes throughout. 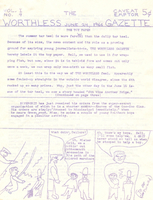 The Worthless Gazette was published in the summer of 1966. Its editorial statement reads, "we are back to do battle with grits, politicians, klansmen, presumptuous weenies—in short, EVERYBODY.” The magazine includes satires on other student publications and a cartoon serial about “Super Grit,” the “über-WASP of the South.”

Heading from the second issue of the BiWeekly 'Pede.

This publication contains the record of King Nyle I (student Nyle Frank) and the Invisible University of North Carolina (IUNC). Most of the issues consist of a single photocopied sheet with typing and drawings on each side. The IUNC was a rebellion against the stiff requirements and formality of the University. All of the work appears to have been done by King Nyle himself. Invisibleness is defined as "INanity, VIrility, SItting Bullism, BLEssedness, and NESSelrode Pudding." The beginning issues cover the coronation of King Nyle in December 1970. The latter issues, in Spring 1974, contain interviews with the former King and a paper on "How to Grow and Nourish Your Own Invisible University."

"A left-wing/humor newspaper intended both to entertain and enlighten our readers." Short articles, satires, and political criticism make up the bulk of The Illuminati. There is news of local or campus interest. President Ronald Reagan and Senator Jesse Helms are the most common targets of the magazine's barbs. 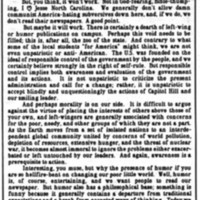 Editorial from the April 22, 1985 issue of The Illuminati. 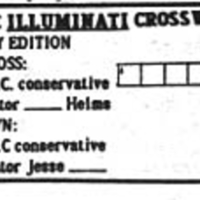 Crossword puzzle from the April 22, 1985 issue of The Illuminati. 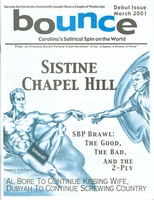 Debuting in March, 2001, Bounce is the most recent addition to the humor genre. In this first issue editors characterize Bounce as “a non-partisan humor magazine dedicated to amusing and enriching the UNC-Chapel Hill community with satirical commentary on current events, both on campus and around the globe . . . .” This issue contains features such as “Political Fun with Left and Right,” and “Top 6 Reasons to be Glad Student Elections Finally Ended.” Bounce is published six times a year.