The late 1960s witnessed a surge in the number of student publications, an increase that reflected the interests of a campus community becoming more diverse. The first publication published for minority students, Black Ink, appeared in 1969. Periodicals such as She, Lambda, East Wind, and Horizontes soon followed, providing news and presenting viewpoints that encouraged debate on issues regarding race, gender, and sexual orientation.

Voces del Horizonte was the first student publication in Spanish at UNC. This periodical presents original work by undergraduates written in Spanish and original artwork inspired by Spanish classes and Hispanic, Portuguese, and Brazilian cultures. In 2002 the publication changed its name to Horizontes [horizons]. The Department of Romance Languages publishes Horizontes biannually.

Although Asian students were enrolled at UNC as early as 1905, a publication specifically representing that community did not appear until 1993. In the first issue of East Wind, the Asian Student Association states the purpose of the news magazine is to “educate each of us on Asian American issues” and “serve as a voice for a minority that has historically been silent in America.” Articles include student editorials, news from campus organizations, descriptions of different aspects of Asian culture, and advice on battling the stereotypes attributed to Asian Americans.

Lambda, The Newsletter of the Carolina Gay Association, January-Feburary 1977

The first issue of Lambda appeared in 1976. For the first seven years Lambda focused primarily on local events and entertainment, as well as information on health issues and national news. For the purpose of anonymity, the early issues were mailed to subscribers in sealed envelopes. The January 1993 issue reported, “Lambda has changed its format from newsletter to activist newspaper.” Still published, Lambda has through the years altered its mission to encompass other groups and causes, “providing a progressive outlet for news, analysis, opinion and dialogue, with a commitment to a “feminist, anti-racist and historically conscious perspective in pursuit of social justice for all people.

Published by the Black Student Movement, Black Ink wanted to address the “inequities present in the white communications media” by publishing a paper that would more accurately represent the viewpoints and activities of the African-American students on campus. Originally published monthly, Black Ink was issued biweekly from 1977 to 1990 and weekly in 1991. No longer available in print, it is now accessible online. The newspaper contains news and editorials about the African-American community on campus and nationwide. 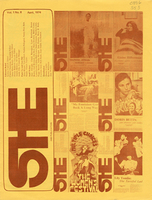 Published by the Association of Women Students at UNC, this magazine sought to address the lack of unity on the part of women students on campus. Written for and by female students, She focused entirely on women’s issues—from feminism and women’s sports to special editions on health and sexuality. While there are some features on students and faculty, national issues are often discussed, especially the Equal Rights Amendment. She appeared monthly from 1973 until 1982, when it ceased publication.