The Southerner and The UNC Wallace Weekly are among publications from the 1940s that reflect the contemporary opinions of students on issues such as poverty, segregation, and war. Later, in the 1960s, a significant number of political newsletters appeared and attracted both conservative and liberal readerships. Publications from that politically turbulent era are long out of print, but their descendants continue to provide outlets for expressing the spectrum of political opinion.

The Southern Conference for Human Welfare (SCHW) was an interracial coalition of Southern progressives founded in 1938 for the purpose of improving the economic, social, and cultural standards among Southern people. The UNC chapter of this organization published this newsletter in 1947. In addition to containing chapter news, the newsletter argues for the implementation of the North Carolina Good Health Plan. 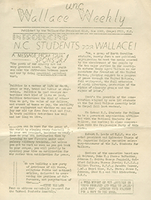 This newsletter was produced from January to April, 1948, by the UNC chapter of the Wallace for President Club. The club supported Henry Agard Wallace, who served as vice-president under Franklin Roosevelt, and who in 1948 ran as a presidential candidate for the Progressive Democrats. This publication contains quotes from Wallace and essays in support of his liberal policies. There are also notes from other Students for Wallace groups around the country. One issue contains the platform for the Progressive Party of North Carolina. 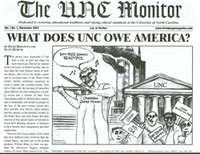 The first issue of this newsletter focuses on the University’s response to the terrorist attacks on September 11, 2001. Articles condemn anti-war and anti-American sentiment on campus, the use of state money to support radical thought in UNC's curricula, and the need for the restoration of the freedom of speech to oppose anti-American propaganda.

The Carolina Conservative Club published this newsletter from 1964 to 1965. In the first issue, the editors celebrate the “revival” of conservatism at UNC, remarking they were seeking to challenge “the fallacious dogmas of the Liberal Left” and champion “the cause of individual liberty, limited government, and the free market. 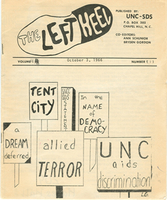 The UNC branch of Students for a Democratic Society (SDS) produced The Left Heel. The SDS was a “New Left” student organization that protested the Vietnam War, racial discrimination, and economic injustice. In this first issue, the editors argue, “for too long the voices of unreflective conservatism have retained a monopoly at this university.” They also express hope that their newsletter would “spark much needed reflection and debate of significant issues.”