The Daily Tar Heel began publication in 1893, as The Tar Heel, with its editors explaining in the first issue that the "growing demands of the University have shown the need of a weekly paper." Over the next thirty-six years , the newspaper limited its coverage largely to the University and the surrounding "village" of Chapel Hill. In 1929 it changed its name to The Daily Tar Heel and began to expand its reporting and analysis of national and international affairs. Since then The Daily Tar Heel has often made news itself by drawing both widespread praise and criticism for its handling of various controversial subjects.

Daily Tar Heel editors ran for election to their posts. This poster is from Charles Kuralt's successful campaign in 1954. In March of the following year the student legislature investigated the paper, responding to accusations that Kuralt used the Daily Tar Heel to impose his liberal viewpoints on students. After graduation from UNC, he went on to become a news correspondent for CBS, and was best known for his long-running television series "On the Road."Other notable Daily Tar Heel editors include writer Jonathan Yardley and journalist Edwin Yoder. 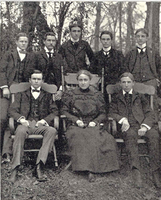 In the center of this group is Mary MacRae, the first woman formally registered as a student at UNC.

The Daily Tar Heel 's policy of editorial freedom often led to controversy. Both students and administration complained about the use of student fees to support a paper they felt published "objectionable" material that did not represent their viewpoints. In July 1972 four students filed a suit against the paper, arguing that it should not be subsidized by student fees. The photograph to the right from the 1973 Yackety Yack illustrates how The Daily Tar Heel collected donations to help pay for its legal defense. The case was decided in favor of the paper.

This photograph shows staff at work in the Daily Tar Heel office located in the Franklin Porter Graham Student Union. Over the years, the DTH office moved five times. The first office, opened in 1893, was located in the upstairs room of a house on Rosemary Street.