Through the years, UNC students made numerous, often abortive attempts to produce newspapers. In 1890 The Chapel Hillian began publication, predating the first issue of The Tar Heel by more than two years. Other newspapers such as The White and Blue, Faun, and The Spokesman of the Non-Fraternity Party followed, but all were short-lived. Unlike The Tar Heel, which rarely ventured into controversial territory in its early days, these other publications did critique campus events and culture as well as some national and international news.

Founded in 1890, The Chapel Hillian predated The Tar Heel by slightly over two years. Like the later paper, The Chapel Hillian was published under the auspices of the Athletic Association. Both bad management and the paper’s open criticism of the faculty lead to its demise in 1892. 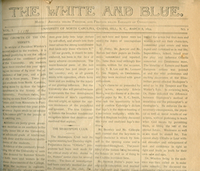 The White and Blue

More than a century ago, some UNC students objected to what they viewed as an over-emphasis of athletics in The Tar Heel campus newspaper. They therefore founded a rival, The White and Blue. This newpaper’s independent, alternative coverage did not last long. By 1895, financial difficulties forced the The White and Blue to merge with The Tar Heel.

"An independent organ of opinion and criticism," this short-lived newspaper was published in October and November of 1926. A major theme of this publication concerns the editors’ perceptions about an emphasis on athletics (especially football) over academics at the University. The Faun felt that its competitor, The Tar Heel, was little more than a mouthpiece for athletics and had “fallen from a literary, editorial, and intellectual point of view.”

Spokesman of the Non-Fraternity Party, February 28, 1931