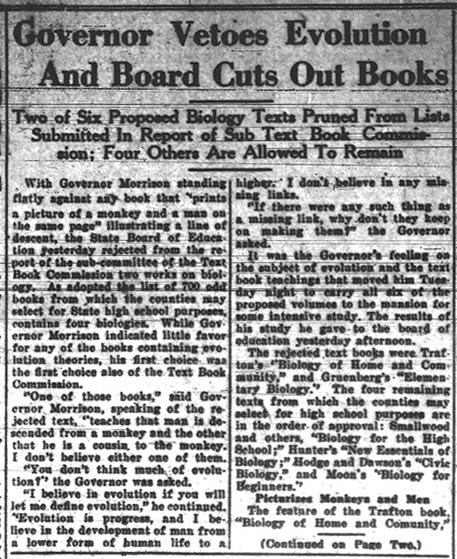 In January 1924, N.C. Governor Cameron Morrison discourages the State Board of Education from approving two biology textbooks that describe the theory of evolution.

Excerpt from the article:

Governor Vetoes Evolution And Board Cuts Out Books.

Two of Six Proposed Biology Texts Pruned From Lists Submitteed In Report of Sub Text Book Commission; Four Others Are Allowed to Remain

With Governor Morrison standing flatly against any book that "prints a picture of a monkey and a man on the same page" illustrating a line of descent, the State Board of Education yesterday rejected from the report of the sub-committee of the Text Book Commission two works on biology. As adopted the list of 700 odd books from which the counties may select for State high school purposes, contains four biologies. While Governor Morrison indicated little favor for any of the books containing evolution theories, his first choice was the first choice also of the Text Book Commission.

"One of those books," said Governor Morrison, speaking of the rejected text, "teaches that man is descended from a monkey and the other that he is a cousin to the monkey. I don't believe either one of them.

"You don't think much of evolution?" the Governor was asked.

"I believe in evolution if you will let me define evolution," he continued. "Evolution is progress, and I believe in the development of man from a lower form of human life to a higher. I don't believe in any missing links.

"If there were any such thing as a missing link, why don't they keep making them?" the Governor asked.

It was the Governor's feeling on the subject of evolution and the text book teachings that moved him Tuesday night to carry all six of the proposed volumes to the mansion for some intensive study. The results of his study he gave to the board of education yesterday afternoon . . . .

As ex officio chairman of the State Board of Education, Governor Cameron Morrison did not participate in the discussion over which textbooks would be approved for use in North Carolina schools, but when he heard that two of the biology text contained treatments of evolution, Morrison took an active role in the debate. Morrison examined two books, Elementary Biology, originally published in 1919, and Biology of Home and Community, published in 1923. The discussion of evolution in both books is brief, covering only a couple of pages, but it was enough for Morrison to discourage their use in state schools.

Representative D. Scott Poole introduces a bill to prohibit the teaching of evolution in state-sponsored schools.

POOLE SEEKS TO BAR DARWINISM OUT OF SCHOOLS

RALEIGH, Jan 8. -- Representative D. Scott Poole, of Hoke county, wants no monkey business in the public schools, so he indicated today by a resolution introduced in the house, to prohibit any teacher "drawing pay from public taxes" to teach Darwinism, or "any other evolutionary hypothesis that links man in blood relationship with any other lower form of life."

The teaching of such subjects, Mr. Poole's resolution suggested, "is injurious to the welfare of the people of North Carolina."

The measure went to the education committee and if by chance it comes out again the general assembly will have its first opportunity to join in the discussion on evolution.

The Poole resolution was one of eight measures to go into the house hopper, bringing the number of bills and resolutions for the first two days to 16.

With the announcement of this resolution by Poole, North Carolina entered a contentious debate that would engage the politicians and people of the state for the next two years. North Carolina had dealt with the subject of evolution in the past, most notably when Wake Forest President William Louis Poteat was harshly criticized for his beliefs on evolution in the early 1920s, and then in 1924 when two biology textbooks were rejected for use in state schools because of their treatment on evolution. However, neither occasion held the attention of the state for as long, nor was the subject of as much heated rhetoric, as the debate over this resolution.

After a strong debate on the Poole Bill in February 1925, the legislative committee on education votes against sending the bill forward.

Excerpts from the article:

Proponents Will Take Measure to House On Minority Report.

RALEIGH, Feb. 10. -- (By the Associated Press). -- With the house committee on education, to which the measure was referred early in the session, tied, Chairman Connor early tonight cast the deciding vote which will return the Poole "evolution" bill with an unfavorable report. Members of the committee stated following the committee meeting that, notwithstanding this, they would bring the bill up on a minority report and make their fight for its passage on the floor of the house.

The hearing was in the hall of the house of representatives. The galleries were packed and all available space was taken by interested spectators. . . .

Chase and Others Heard

At times the debate was sharp.

The chief spokesman for the proponents of the bill, outside of committee members, was Rev. J. R. Pentuff, pastor of McGill Street Baptist church, of Concord. He discussed Darwinism and declared that it is inconsistent with orthodox Christianity.

Representative Poole, patron of the bill, declared that he could produce affidavits supporting the statement of a young man who entered the North Carolina A. & E. college last year and did not return because "a professor told the young men that the Bible was a myth and the Christian religion a superstition." The representative stated that the young man informed him that this professor said that the Christian religion was accepted "just like Santa Claus."

Representative Madison declared that evolution is being taught in some of the public schools of the state and that he was prepared to prove it.

Dr. Chase began by stating that he was not a student of biology, but that he did think something ought to be said on "the other side." He asked: "Why should it be unlawful to teach in the week what is not unlawful to preach from the pulpits on the Sabbath day?" He declared that even Christianity has suffered because of some of its over zealous advocates; that all great causes have so suffered. Men like Gallileo were persecuted, he said, and declared that the Catholic church in Gallileo's time thought his doctrine to be worse than a denial of the incarnation of doubting the Holy Trinity.

Dr. Chase was asked if he thought teachers had the right to teach atheism and to this he replied that this was a matter of conscience . . . .

Although the resolution proposed by Poole would condemn the teaching of evolution in all North Carolina's state-supported schools, much of the debate focused on teaching in the state universities. Some faculty members were singled out for the purportedly anti-religious teaching, and, in response, university faculty were the most outspoken opponents of the resolution. After Harry Woodburn Chase, President of the University of North Carolina, testified at the hearing described in this article, he became a frequent target of the anti-evolutionists, and was the subject of many critical articles and letters to the editor in the months that followed.

While the debate described in this article resulted in an unfavorable report on the Poole resolution, it was evidence of the divide within the legislature and the strong feelings that North Carolinians on both sides of this issue held. 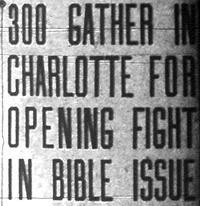 In early May 1926, during the heated campaigns for the state legislature, the "Committee of One Hundred" held a contentious meeting in Charlotte.

Excerpts from the article:

300 GATHER IN CHARLOTTE FOR OPENING FIGHT IN BIBLE ISSUE

Adoption of a platform of principles nearly identical with the statement issued by the "Committee of One Hundred" at its organization meeting here three weeks ago was the final achievement of that body at a stormy meeting here yesterday.

The adoption of the report of the "committee on constitution and platform," was accomplished near the end of one of the most hectic days ever spent by any body of men in North Carolina dealing with a religious idea or with any idea wherein the aged-old conflict between religious dogma and unrestrained freedom about matters religious were concerned.

Before the day was over supposedly sedate and self-controlled ministers of evangelical faiths had so far cast aside their customary restraint and decorum that bodily encounters seemed imminent once or twice and the unique spectacle of a Christian layman stepping out into the aisle of a house of worship -- the Second Presbyterian church -- to step between a minister advancing with apparent belligerent intent toward a man addressing the audience and quieting the disturbance was furnished.

. . . The report of the platform committee, drawn by Judge [Walter H.] Neal, ex-officio member; Dr. A. A. McGeachy, paston of the Second Presbyterian Church, Charlotte; Hon. Z. V. Turlington, of Mooresville, attorney-at-law; Dr. W. C. Barret, Baptist minister of Gastonia; Dr. A. R. Shaw, pastor of Williams Memorial Presbyterian church in Mecklenburg county, included opposition to the union of church and state, to attack from any source on anything calculated to discredit of the Bible as inspired word of God, to a denial that the body wished to cripple state schools, and opposition to employment of anyone as a teacher who holds views contrary to the ideas expressed in the resolutions . . . .

. . . W.T. Shore, Charlotte lawyer, gave the meeting a moment of pause during the discussion of the platform after it was read by Dr. McGeachy, on behalf of the committee, when he asked if the committee meant to make a man's religious belifs a test as to his fitness for teaching in state schools.

"How about a Jew, or a Catholic, or men of no expressed religious affiliation?"

Presently Thomas M. Glasgow, business man of Charlotte, was on his feet expressing the belief that the meeting was treading on somewhat dangerous ground in going so far as to provide in its platform that religious views should be a test for teaching. He was asked to come to the front. He urged that a man's innermost thoughts are his own that the body was going too far in this respect. Rev. J. C. Betts, of Raleigh, heartily agreed with him. . . .

The "Committee of One Hundred" was formed in early April, 1926, with the goal of organizing opposition to the teaching of evolution in North Carolina's public schools. The "one hundred" in the group's title referred to the state's one hundred counties, from which it hoped to attract members. The committee was initially organized by a group of ministers and laymen from various denominations. The meeting described in this newspaper article was the largest public gathering held by the group and shows that their determination to fight the teaching of evolution extended not just to the primary schools in the state, but to the public colleges and universities as well.