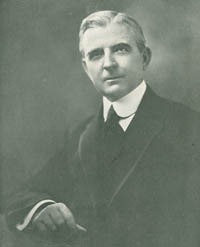 Cameron Morrison (1869-1953) was elected governor of North Carolina in 1920 with the support of his long-time political cronies in the conservative wing of the Democratic Party. Morrison was true to his political roots in opposing most of the social reforms of the period including child labor legislation and voting rights for women. He surprised many, however, by his strong support for innovative (and expensive) plans to increase state services and promote economic growth. He strongly supported the construction of a modern highway system and unsuccessfully proposed the creation of a state port facility.

Morrison also backed a multi-million dollar bond issue for state universities and other public institutions and substantially increased state funds for public education. His support for education, however, did not make Morrison a friend of the theory of evolution. In fact, Morrison scored the only real success in the anti-evolution fight in North Carolina schools when, acting as ex officio chairman of the state board of education, he pushed through a ban of two high school textbooks containing treatments of Darwin's theory. For the rest of his long and active life Morrison maintained his interest in politics and served in both the United States Senate and House of Representatives. He was never again prominent, however, in the crusade against evolution.