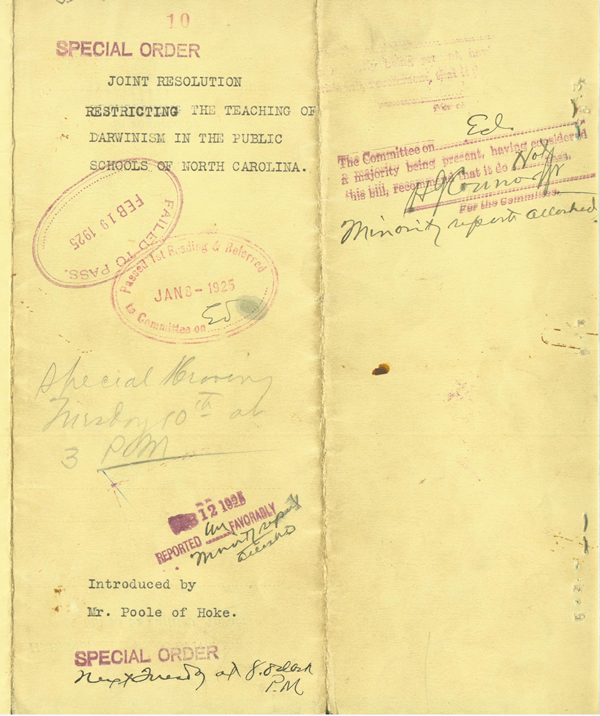 Text of the "Poole Bill," the resolution introduced in January 1925 in opposition to the teaching of evolution in North Carolina schools:

JOINT RESOLUTION RESTRICTING THE TEACHING OF DARWINISM IN THE PUBLIC SCHOOLS OF NORTH CAROLINA.

Resolved by the House of Representatives, the Senate concurring:

1. That it is the sense of the General Assembly of North Carolina that it is injurious to the welfare of the people of the State of North Carolina for any official or teacher in the State, paid wholly or in part by taxation, to teach or permit to be taught, as a fact, either Darwinism or any other evolutionary hypotheses that links man in blood relationship with any lower form or life.

2. That this resolution be in effect from and after its ratification.

D. Scott Poole, state representative from Hoke County, introduced this joint resolution at the beginning of the General Assembly session in 1925. (Legislative resolutions differ from bills in that they are expressions of opinion by the House or Senate; they do not have the force of law.) After its introduction, the resolution was sent to the House Committee on Education, where the membership evaluated whether or not this item should be sent back to the full House with a favorable or unfavorable report. The committee's vote split evenly on the question, and the chairman, Henry Groves Connor, Jr., cast the deciding negative vote against Poole's resolution. The resolution was returned to the House with the negative opinion of the committee stamped on it. However, the committee members who supported the resolution attempted to bypass the majority opinion by submitting a minority report, which enabled the resolution to return to the House for a vote. On February 19, 1925, the full House defeated the measure by a vote of 67 to 46. 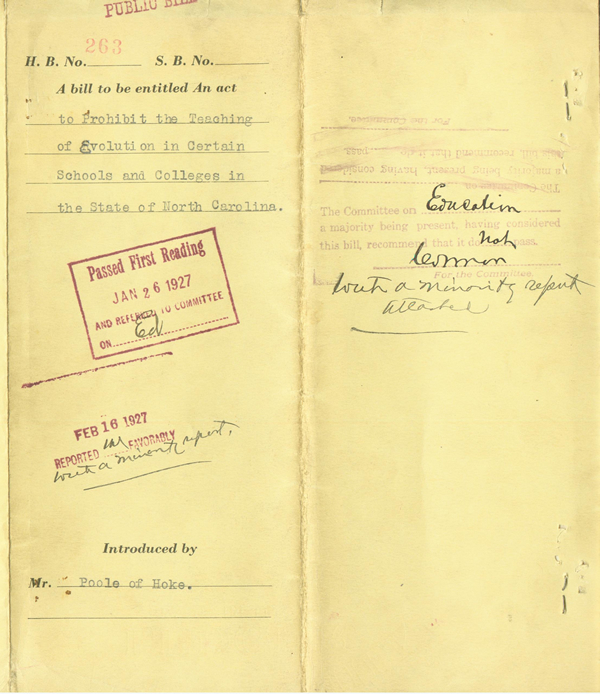 Source description: North Carolina General Assembly, "A Bill to be Entitled an Act to Prohibit the Teaching of Evolution in Certain Schools and Colleges in the State of North Carolina," 1927. Courtesy of the North Carolina State Archives.

In the 1927 legislative session, D. Scott Poole introduced this bill to prohibit the teaching of evolution in state-supported schools.

The General Assembly of North Carolina do enact:

Section 1. That it shall be unlawful for any professor, teacher or instructor, to teach in any school, college or educational institution within the State of North Carolina, receiving aid from the State, any doctrine or theory of evolution, which contradicts or denies the divine origin of man or of the universe, as taught in the Holy Bible: PROVIDED, however, that nothing in this act shall be construed to prohibit the teaching in said schools, colleges or educational institutions of all useful arts and sciences, unless the same are taught in such a manner as to contradict the fundamental truths of the Holy Bible.

Sec. 3. That this act shall be in force from and after its ratification.

The text of this bill differs significantly from resolution proposed by D. Scott Poole in 1925. This bill was prepared by the North Carolina Bible League and approved by that group's executive committee before it was introduced in the legislature. It is not clear whether Poole, who sponsored the bill, had a hand in shaping the text. 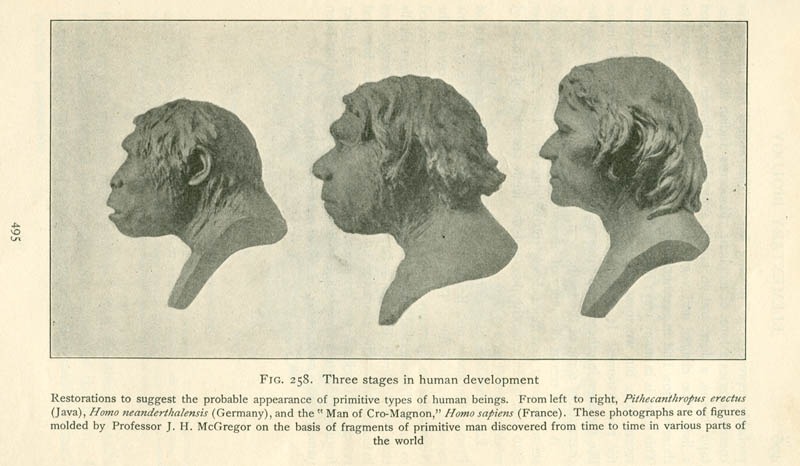 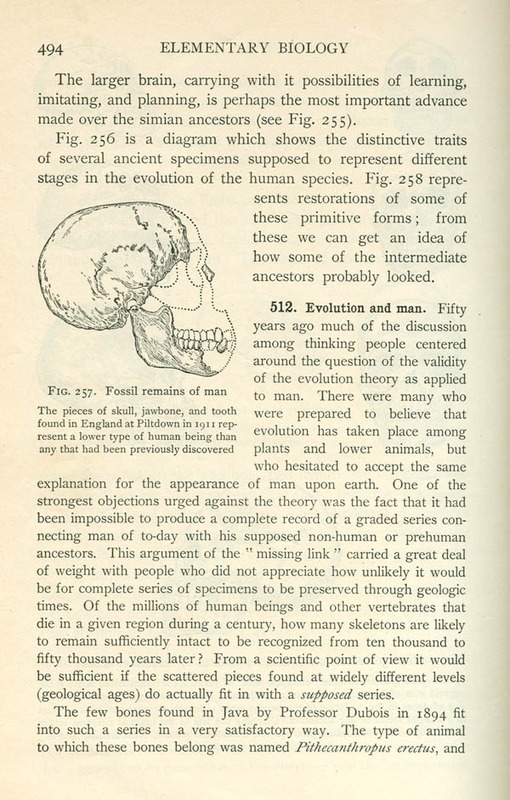 Fifty years ago much of the discussion among thinking people centered around the question of the validity of the evolution theory as applied to man. There were many who were prepared to believe that evolution has taken place among plants and lower animals, but who hesitated to accept the same explanation for the appearance of man upon earth. One of the strongest objections urged against the theory was the fact that it had been impossible to produce a complete record of a graded series connecting man of to-day with his supposed non-human or prehuman ancestors. This argument of the "missing link" carried a great deal of weight with people who did not appreciate how unlikely it would be for complete series of specimens to be preserved through geologic times. Of the millions of human begins and other vertebrates that dies in a given region during a century, how many skeletons are likely to remain sufficiently intact to be recognized from ten thousand to fifty thousand years later? From a scientific point of view it would be sufficient if the scattered pieces found at widely different levels (geologic ages) do actually fit in with a supposed species.

The few bones found in Java by Professor Dubois in 1894 fit into such a series in a very satisfactory way. The type of animal to which these bones belong was named Pithecanthropus erectus, and probably represents a "missing link." This animal had among his contemporaries a form of elephant, rhinoceros, Indian hippopotamus, tapir, hyena, a deer, and an animal somewhere between a tiger and a lion. The climate and vegetation were similar in many ways to those we now find in southern India and the island of that region. This form is in many ways intermediate between the apes and more recent man, but we must not expect it to be an average between the two extremes. It is more like Homo in some ways and more like the apes in others and in some respects it is between, as in the character of some of the teeth.

A more recent discovery of ancient remains in Sussex (England) seems to point to a more closely related ancestor. The skill is larger than that of Pithecanthropus, and the teeth are more like those of modern man (Fig. 257).

Large numbers of specimens have been found in various parts of France, Germany, and Belgium that belong apparently to the same races of primitive men. The first of these was found in a cave in the Neanderthal in Germany, in 1856, and the type is frequently referred to as the Neanderthal race. Although these had much larger skulls than the Piltdown (Sussex), - even larger than is found among races living to-day, - the characters of the jaws and teeth, the low and retreating forehead, the prominent ridges over the eyes, and other features indicate a lower stage of development. This group has been named Homo primigenius, or Homo neanderthalensis.

About this Source: Elementary Biology was one of the two textbooks originally approved by the North Carolina Text Book Commission, but later rejected by the State Board of Education after Governor Cameron Morrison spoke out against the two texts, criticizing them for their treatment of evolution. 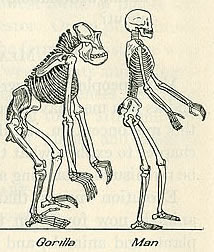 These two textbooks were rejected for use in North Carolina schools by the State Board of Education after they were criticized by Governor Cameron Morrison for their treatment of evolution.

Main problem. What are the chief reasons for believing in evolution, and how has evolution been brought about?

I. MEANING OF EVOLUTION

Many people have a wrong notion as to what evolution means; and as you may have heard some of these people talk who have this misconception, it will be well at the very beginning of the chapter to explain what the word really means so that there will be no misunderstanding as you read the rest of the chapter.

Evolution means that the various species of plants and animals now found on the earth have descended from other plants and animals, and these in turn from still others; and if these could be traced back far enough, it would be found that these all came originally from one common ancestral species, which was a very simple form of life. Or, to put it in another way, the first form of life that appeared on this earth many millions of years ago was a very simple form, and from that form have gradually evolved all the varied and complex forms of life that we find today. How long this has taken no one knows, but the time must probably be reckoned in millions, perhaps hundred of millions, of years. Looking toward the future, evolution means that animals and plants will continue to go on changing and that thousands of years in the future they will be different from what they are now. In short, evolution means change, natural and orderly change.

One erroneous notion which some people have about evolution is that it means that man has descended from the monkey. What it really means is that if we could trace back far enough through thousands of years the ancestry of man and monkey, it would be found that they came from the same ancestor, an animal different from any now living. Man is related to the monkey but did not descend from one. The relationship is much like two twigs on a tree that come out of a common branch like a letter Y. One twig does not grow from the other but they both grow from the same branch. Or, to put it in still another way, man and monkey are like cousins in that they had a common ancestor.

About this Source: Biology of Home and Community was one of the two textbooks originally approved by the North Carolina Text Book Commission, but later rejected by the State Board of Education after Governor Cameron Morrison spoke out against the two texts, criticizing them for their treatment of evolution.