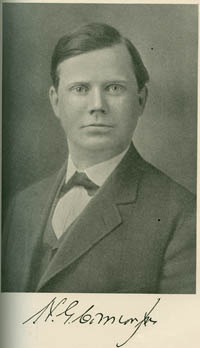 Henry Groves Connor, Jr. (1876-1946) was the son of a longtime legislator and judge from North Carolina. He was educated in public and private schools in Wilson, N.C., attended the University of North Carolina, then returned to Wilson to study law in his father's office. Connor was admitted to the bar in 1898.

Connor followed his father into office in 1919, when he was elected to the State Senate. He served in House of Representatives from 1921-1927, and was chairman of the House Committee on Education when in January 1925 it received D. Scott Poole's resolution to ban the teaching of evolution in North Carolina Schools. It was Connor who cast the deciding vote to return the resolution with an unfavorable report.

Connor practiced law in Wilson for 45 years. In what was truly a family business, Connor, his father, brother, and son had each been at various times partners in the firm of Connor, Gardner, and Connor. Connor died in Wilson in 1946.