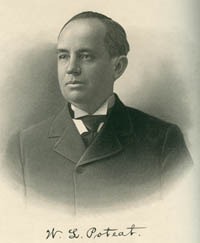 William Louis Poteat (1856-1938) graduated from Wake Forest College in 1877 and immediately joined the faculty as a tutor. In 1883 he was made professor of biology and served in that capacity until 1905 when he was elected president of the college.

Poteat was a popular teacher who introduced the laboratory method to his biology classes and was well known as a public lecturer on topics such as science, religion and temperance. His position as a leader of the Baptist Church in North Carolina and president of a Baptist college did not prevent him from accepting Darwin. Poteat believed that the theory of evolution did not touch the fundamentals of Christian faith and could not, therefore, be antagonistic to it. He first came under attack in 1920 in a series of articles in the Western Recorder by T.T. Martin, a Tennessee evangelist, and for the first half of the 1920s, Poteat was the target of conservative Baptists inside and outside North Carolina who condemned his views on faith and science and demanded his ouster from Wake Forest. He survived battles in the church press and the Baptist State Convention through forceful argument, exemplary personal conduct, and the passionate support of his former students, described by one of them as "grim alumni, with red eyes and no scruples about flying at a fundamentalist throat." The Baptist State Convention of 1925 marked the last battle against Poteat and two years later he retired from Wake Forest College, the longest serving president of that institution.