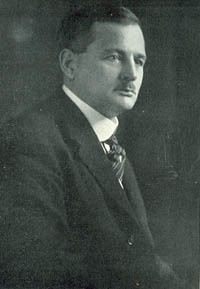 A successful lawyer, banker, and businessman from Robeson County, Angus W. McLean (1870-1935) served as governor of North Carolina from 1925 to 1929. Prior to his election, McLean held various positions in the state Democratic Party and eventually served at the federal level as Woodrow Wilson's assistant secretary of the Treasury in 1920. McLean's true ambition, however, was to serve as governor, and he began preparing for the 1924 gubernatorial election while in Washington. He positioned himself as a fiscal conservative during the Democratic primary and defeated his more eloquent opponent, Josiah W. Bailey. McLean then won the general election by a solid majority.

As governor, McLean's policies, actions, and reforms reflected his earlier career as a prominent business owner. He was friendly towards the state's commercial interests, and when proposed legislation concerning workers' compensation and more stringent child-labor laws came before the legislature, the bills did not receive his support. In addition, he incorporated business-like management practices and innovations in state government, which led to several fiscal achievements during his four-year term. These included an executive budget system, which placed the governor at the head of an agency charged with managing the state budget; establishment of a Salary and Wage Commission to equalize pay and classification of state employees; and several acts intended for the better management of county government and finances.

While McLean was a staunch Christian and social conservative, he withheld public support for the Poole Bill and its proponents during the 1920s evolution controversy. He made veiled references about the demise of Christian education and moral principles in speeches at the University of North Carolina (October 1925), Flora MacDonald College (October 1927), and Elon College (May 1928), but he did not throw the full power of the governor's office behind the Poole Bill during the 1925 or 1927 General Assembly sessions. As governor, he was notably absent from the public debate on the teaching of evolution in North Carolina.