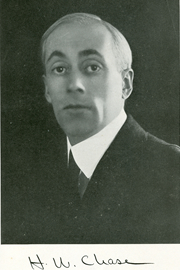 Massachusetts native Harry Woodburn Chase (1883-1955) joined the faculty of the University of North Carolina in 1910, beginning as a professor of education, and later offering courses in psychology. In June 1919 he was elected President of the University.

Chase presided over UNC during a period of rapid growth and change. The University added several new departments, with a new focus on professional schools, and built twenty-one new buildings during Chase's presidency. While UNC gained national recognition during this period, and was often touted as the leading public school in the South, the changes at the University were not always popular within the state.

Having been accused of teaching liberal ideas that were out of keeping with the more conservative populace of North Carolina, the University, and Chase in particular, came under attack during the debate over the teaching of evolution in the public schools in the 1920s. After Chase testified at a hearing of the House Committee on Education in 1925, he was criticized in the press, the subject of many letters to the editor disagreeing with his stance on the topic. Chase framed the debate over evolution as a question of academic freedom, arguing that the University would be harmed irreparably if the state legislature were able to dictate what it could and could not teach.

Chase left Chapel Hill in 1930 when he assumed the Presidency of the University of Illinois. He left there after a few years to become Chancellor of New York University, a position he would hold until his retirement in 1951.