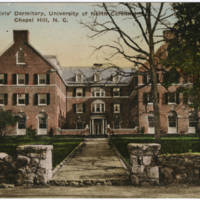 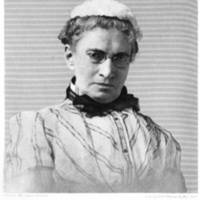 UNC opened the first residence hall for women in 1925. The building was named for Cornelia Phillips Spencer (1826-1908), a writer who was the daughter and sister of UNC professors. Spencer was an active proponent for UNC, but did not believe in coeducation or in equal rights for African Americans.

Getting the residence hall built became known as the “Battle of Spencer Hall.” Dean of Women Inez Stacy had advocated for housing for women on campus since she first arrived. Finally, in 1921, plans were drawn for a women’s residence hall. This had staunch student opposition. Weekly articles in the student newspaper appeared against the residence hall with titles like “Women Not Wanted Here” and “Shaves and Shines, but No Rats and Rouge.”

Listen to Sharon Rose Powell, Class of 1968, who led a movement that recommended new rules for women students, including the abolishment of in loco parentis. 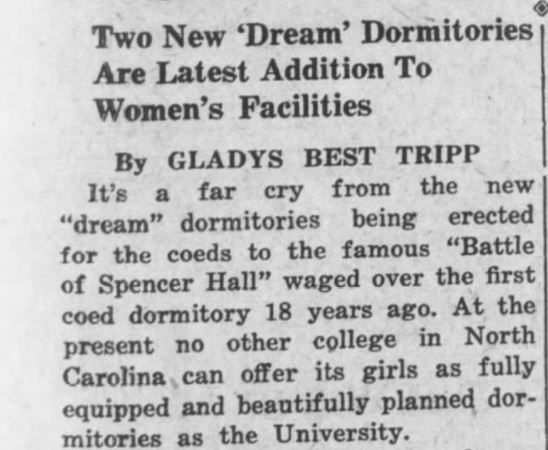 In the late 1930s, the university added Kenan, McIver, and Alderman dormitories. Sufficient housing for women remained a contentious issue into the 1960s. Dean Kitty Carmichael even tried to take over residence halls across the street -- Carr, Ruffin, Grimes, and Manly -- for women. She was accused of trying to banish men to the South campus.

Listen to Karen Parker, Class of 1965, and the first African American female undergraduate student, talk about the double standard that women students faced in dorm life.