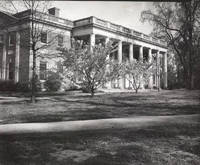 Although only seven people at the University of North Carolina died during the influenza pandemic, two of the victims were university presidents.

Edward Kidder Graham became the acting president of the University of North Carolina in 1913, and was elected president in 1914. Graham died from influenza on 26 October 1918, two weeks after his 42nd birthday. Graham Memorial Hall was built as a student union in 1931 in Graham's honor.

Following Graham's death, Marvin Hendrix Stacy, the chairman of the faculty, became the acting university president. On 21 January 1919, Stacy also died from influenza. Stacy Residence Hall, completed in 1938, is named in his honor.

The pandemic led to the university appointing its first university physician, Eric Alonzo Abernethy. Before this appointment, several doctors cared for infirmary patients on a rotating basis.