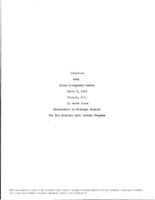 Two consecutive interviews are combined here, one each of Zelma Montgomery Murray and her husband Charles Murray. The couple speaks about their life in North Carolina mill towns and their jobs in the mills. In this audio clip, Charles Murray talks about the 1918 influenza pandemic in Glencoe, North Carolina The audio corresponds with pages 20-21 of the Charles Murray interview transcript (pages 36-37 of the entire transcript). Charles Murray says that a lot of people died during the pandemic and that he "went to a funeral about every day there for a week." He says that he and one other person were "about the only ones that didn't have it." 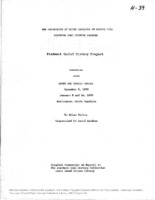 In this interview, James and Nannie Pharis discuss their lives living in Spray (now Eden), North Carolina. The couple talks at some length about their memories of the influenza epidemic. Neither of them caught the flu, but Nannie lost a sister, a sister-in-law, and several aunts and cousins. They mention eating onions, drinking whiskey, and wearing asafoetida (pictured) as ways to prevent catching the flu. Nannie recalls that every pregnant woman who caught the flu died, and James recalls that it killed "the stoutest of people," including his friend who was a fireman. According to Nannie, businesses did not close, but they were advised not to visit other people, and families had a hard time finding help. James's mention of Prohibition likely refers to North Carolina law, which predates the Eighteenth Amendment. The audio corresponds with pages 55-57 of the interview transcript. 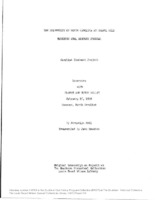 In this interview, Gladys Irene Moser Hollar and her husband, Glenn Hollar, describe their lives near Conover, North Carolina. In these audio clips, Glenn Hollar shares recollections about influenza pandemic.

In the first audio clip, Glenn Hollar recalls that his mother and father both had pneumonia, and that his baby sister was stillborn. Many people who came down with influenza at the time also caught pneumonia as a secondary infection. He also recalls mill owner Charles Brady bringing them groceries, and that he (Hollar) would cook and keep the house going. This audio clip corresponds with page 25 of the transcript.

In the second audio clip, Hollar says that the hardest time in his life was during the influenza epidemic, when "they was all sick." He said people would come up to the window and "holler and see if you was still alive, is about all." This audio clip corresponds with page 55 of the transcript. 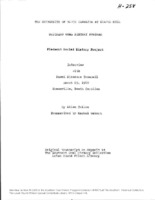 In this interview, Naomi Sizemore Trammell talks about working in textile mills in South Carolina.

In this audio clip, Trammell talks about coming down with influenza during the epidemic. The audio clip corresponds with pages 33-34 of the interview transcript. 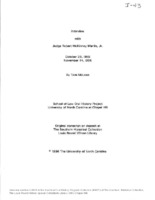 This interview is one of a series of interviews conducted by students from the University of North Carolina School of Law with North Carolina lawyers and judges. In this audio clip, Judge Martin talks about his memories about the influenza pandemic when he was a child living in Northampton County, North Carolina. He mentions seeing horse-drawn wagons carrying bodies past his house nearly every day, his parents receiving telephone calls when people died, and his father buying groceries for sick neighbors and leaving them on the front porch. The audio corresponds with pages 13-14 of the transcript. 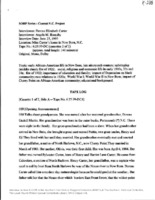 In this interview, Carter describes her life in New Bern, North Carolina. In this audio clip, Carter describes her memories of the influenza pandemic in 1919. She says she used to want to be a nurse, perhaps because of the pandemic, but her uncle told her she shouldn't be a nurse because there's too much drudgery. Carter recalls that all six members of her family were sick, and that some of her neighbors died. Her family had a black doctor, who hired a black nurse to care for them. This audio clip corresponds with page 7 of the tape log. 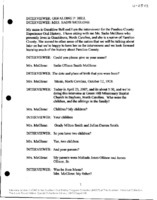 Sadie Ollison McGlone was born on October 12, 1924 in Mesic, North Carolina, the eldest of eight children growing up on a family farm. In this interview, she speaks about a variety of topics, including her childhood in Mesic, the struggle to maintain family land from white developers, Klan activity and black resistance. In this audio clip, McGlone mentions an older sister who was born while her father was stationed in Kentucky. The baby died from influenza before her father could get home to see her. The audio corresponds with page 17 of the interview transcript.