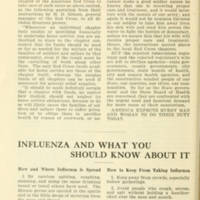 Influenza and What You Should Know About It, The Health Bulletin, November 1918 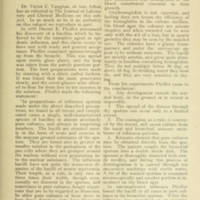 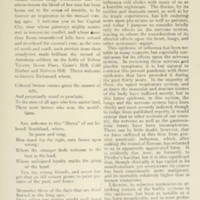 Some of the Nervous and Psychic Effects of Influenza, Charlotte Medical Journal, August 1919

At the time of the pandemic, no one knew what caused influenza. In 1918, many scientists thought the bacteria Bacillus influenzae, also known as Pfeiffer's bacillus and Hemophilius influenzae, caused the illness. Research conducted during the pandemic called this conclusion into question, summarized in the editorial "The Bacteriology of Influenza," published in the December 1918 issue of the Charlotte Medical Journal. The human influenza virus was first isolated in 1933, more than a decade after the pandemic ended.

Just because no one knew what caused influenza didn't mean that no one knew how to treat it and prevent it from spreading. The article "Influenza and What You Should Know About It," published in the November 1918 issue of The Health Bulletin, advises people to avoid crowds and "people who cough, sneeze, and spit without holding a handkerchief over the nose and mouth." The article also reminds people "to help those who cannot help themselves."

In "Some of the Nervous and Psychic Effects of Influenza" (Charlotte Medical Journal, August 1919), Dr. J. Allison Hodges writes about the lasting effects of influenza on the nervous system. Hodges briefly mentions two cases of encephalitis lethargica, a disease characterized by high fever, headache, double vision, delayed physical and mental response, and lethargy. There was an epidemic of encephalitis lethargica at the time Dr. Hodges wrote this article, but there have not been any epidemics since the 1920s.