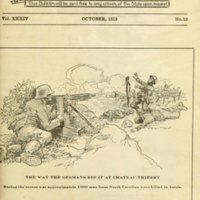 The Way the Germans Did It At Chateau-Thierry 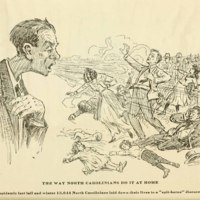 The Way North Carolinians Do It At Home

These cartoons, published in the October 1919 issue of the North Carolina State Board of Health's The Health Bulletin, demonstrate influenza's deadliness. The first page, "The Way the Germans Did It At Chateau-Thierry," states: "During the recent war approximately 1000 men from North Carolina were killed in battle." 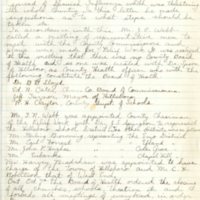 A Record of the War Activities in Orange County, North Carolina, 1917-1919

"A Record of the War Activities in Orange County, North Carolina, 1917-1919," by Annie Sutton Cameron, is a manuscript history of local efforts during World War I in Orange County, North Carolina, and related correspondence and lists of soldiers and members of local committees. Cameron's history covers the Council of Defense and the Home Guard, war bond and overseas relief campaigns, patriotic observances, the influenza epidemic of 1918, and other matters.

A chapter pertaining to the influenza pandemic covers the months October 1918 to February 1919. The chapter begins: "Early in October 1918 Dr. D. H. Hill, State Chairman of the Council of National Defense, sent letters to all County Chairmen warning them of the spread of Spanish Influenza which was threatening the whole country. In this letter he made suggestions as to what steps should be taken etc." In response to this letter, the chairmen created a County Board of Health. On 7 October 1918, this board "ordered the closing of all churches, schools, theatres etc. and forbade all meetings of every kind, in order to prevent, if possible, a spread of the disease which had already broken out in the Community."

Cameron describes various relief efforts throughout Orange County. Although the County Board of Health organized these efforts, most of the workers were members of the Red Cross. The chapter ends with a list of people who helped during this time period, and a list of people who died: six in Hillsborough, nine in Chapel Hill, eleven in Carrboro, four in Cedar Grove Township, and three in Little River Township. 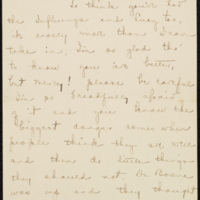 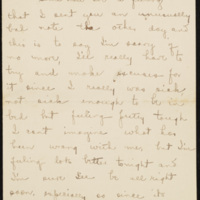 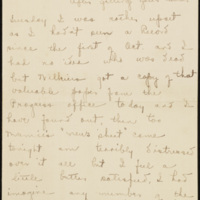 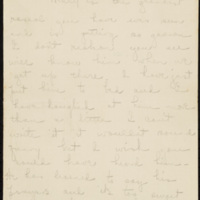 In this series of letters, Jane (Jennie) Crichton Williams Lewis, of Jackson, North Carolina, writes about influenza in Northampton County and Warren County, North Carolina. The letters are written to Lewis's mother, Lucy Tunstall Alston Williams, of Warrenton, North Carolina. Influenza is a constant theme throughout these letters. Lewis repeatedly mentions the sick and dying, as well as her fears about the illness. She also keeps her mother informed about her young son, Henry, who turned two years old during this time. As was common at the time, Lewis uses quotation marks when referring to "influenza" and "flu."

In the first letter, from October 1918, Lewis reacts to the news that her mother and her sister, Lucy, had both been stricken by the flu. Although she is happy that they are feeling better, she warns, "the biggest danger comes when people think they are well and then do little things they should not." She notes that there have been "no new cases about here and I hope it will all soon be gone."

In the second letter, from late October 1918, Lewis says she is "more afraid of [influenza] than anything I know of." She mentions several people who are sick with the flu, one of which has a one-month old baby. On page 5, Lewis mentions that she might not be able to buy a winter dress or hat due to the quarantine.

In the third letter, from October/November 1918, Lewis says she is distressed by the news of deaths in Warrenton, writing, "influenza is the worst thing I've ever heard of." She mentions that Jackson has been "exceedingly fortunate," but that there are not enough doctors to see all of the sick patients in Northampton County. She says that her family is doing "real well," and that they "spray and gargle" to avoid getting sick. Everything is closed except for stores, and only 10 people at a time are allowed in stores.

In the last letter, from circa 15 November 1918, Lewis mostly talks about Henry, and doesn't mention the flu until page 8, when she says, "the 'flu' is still on although the schools and churches are open." She did buy a dress and a hat. At this point, the flu seems to be on its way out of northeastern North Carolina. 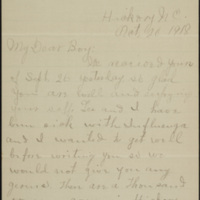 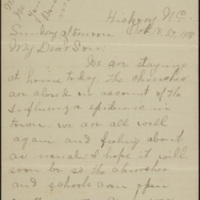 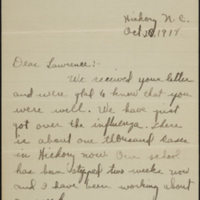 This series of letters, to Corporal Lawrence T. Peeler, were written before Peeler's family learned that he had died in battle in France on 29 September 1918. All of the letters were returned to the family following his death. Lawrence's father was a minister, and the family routinely moved throughout the state.

In the first letter, from 20 October 1918, Lawrence's mother, Etta, says that she and Lawrence's brother, Lee, had been sick with influenza. She says she "wanted to get well before writing you so we would not give you any germs." She goes on to say that there have been at least a thousand cases of influenza in Hickory, and that churches, schools, and public gathering places have been closed. Since the churches are closed, they will be behind on collections.

In the second letter, which appears to be from 27 October 1918, Etta says that they are all well again, but that the churches are closed and a conference that was to have been held in Monroe has been postponed indefinitely.

In the third letter, from 28 October 1918, Lawrence's brother Lee repeats many of the things that his mother has written, including that they "have just got over the influenza," that there are about a thousand cases of influenza in Hickory, and that the schools have been closed. 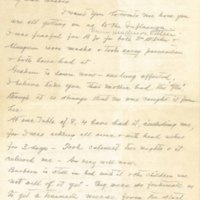 In this letter from October 1918, University of North Carolina professor William Cain asks his sister, Bessie Brownrigg Cain Henderson, how relatives in Salisbury, North Carolina "are all getting on as to the Influenza." He agrees with Henderson that their mother had flu, "although it is strange that not one caught it from her." He gives updates about the health of family and students, and warns that pharmacology professor William MacNider and anatomy professor Charles Staples Mangum caught the flu, even though they wore masks and "took every precaution." Cain mentions that University of North Carolina President Edward Kidder Graham "is down now -- one lung affected." Graham died on 26 October 1918. MacNider and Mangum both recovered. Cain later warns not to travel "on any ordinary account." 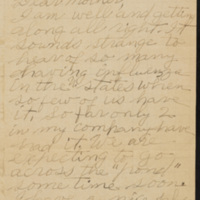 More influenza in North Carolina than in France, November 1918

In this letter from November 1918, Joseph Lucius Reed, a member of Company D, 120th Infantry, 30th Division, American Expeditionary Forces, tells his mother, Bethany Barbara Sales Reed, that "it sounds strange to hear of so many having influenza in the U. States when so few of us have it. So far only 2 in my company have had it." Reed's company was lucky, as influenza was just as rampant in France as it was in the United States. 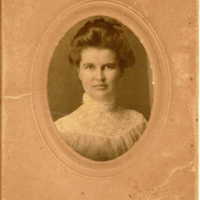 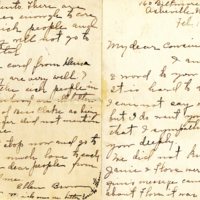 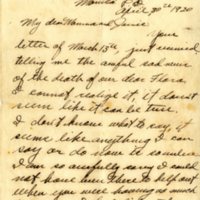 Despite being referred to as the "1918 influenza pandemic," four pandemic waves occurred between 1918 and 1920. Flora Blue, age 35, died in February 1920 during the fourth wave. Flora Blue and her sister, Jane Blue, were both sick with influenza, but Jane survived. The sisters, originally from Efland, North Carolina, were living in Raleigh at this time. In her letter of 18 February 1920, Ellen Brown sends condolences to Flora's mother, Margaret Blue. Brown, a nurse, mentions that she herself is recovering from influenza, and therefore must stop writing and go back to bed. Brown also mentions the hard work being done by other nurses, and that there are not enough nurses to care for all of the sick people.

In his letter of 30 April 1920, Flora's brother, John "Wilmer" Blue, expresses regret for not coming home from his station in Siberia sooner. He fears that Flora thought he did not love her, and feels helpless being so far away from his family at this sad time. Wilmer joined the United States Army in 1917 and served with the American Expeditionary Forces in Siberia.