Jane Austen was born eight months after the start of the American Revolutionary War, and died two years after the end of the Napoleonic Wars. Therefore, the Britain that she knew was almost constantly at war. This wartime context factors into both her life and her novels. For instance, her brother Charles was an officer in the Royal Navy, and he is thought to be the inspiration behind characters with ties to the Navy in both Mansfield Park and Persuasion. Austen was a writer who was clearly aware of the political issues of her time, and this wing of the exhibit aims to highlight items that shed some light on that context.

Many of the items assembled here deal with the Napoleonic wars and Britain's naval prowess including a naval history of the nation, an account of the Battle of Trafalgar, and a mock-epic poem satirizing Napoleon. Two of the items are caricatures, or early political cartoons, a genre which blossomed during Austen's life thanks to the work of James Gilray and George Cruickshank, both represented here. The final item in this collection is a page from a yearly almanac depicting the coats of arms of the Prince of Wales, future George IV and a fan of Austen's novels. As a final note, viewers interested in the naval context of Austen's novels should also see the Commonplace Book item in the Regency Domesticies gallery of this exhibit. 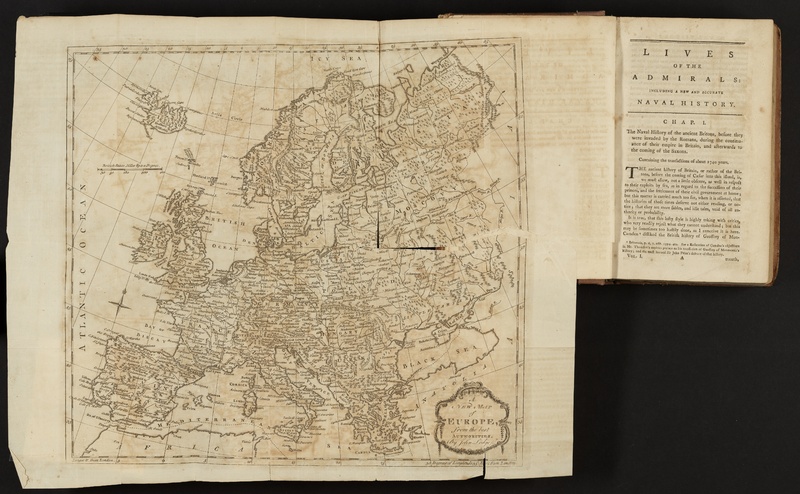 This book gives a history of British naval wars beginning with the ancient Britons and ending in 1779, just a few years after Austen’s birth. By the time of Austen’s life, Britain had become a naval powerhouse and would gain many important victories under Vice-Admiral Horatio Nelson, who would become a national hero during the Regency period. The opening here shows the first page of the first volume of the work, alongside a large and detailed foldout map of Europe on the facing page. 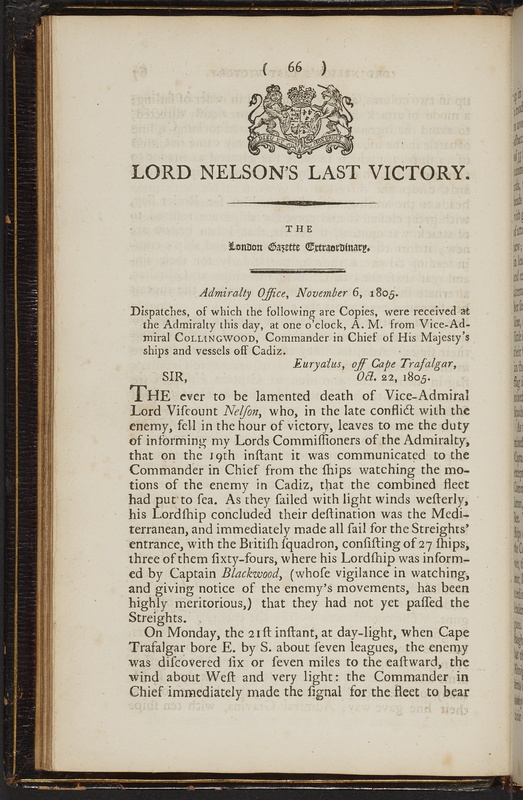 Entry about Lord Nelson's death at the Battle of Trafalgar in The British flag triumphant!

Vice-Admiral Horatio Nelson, often known simply as Lord Nelson, was the strategist behind some of Britain’s most important naval victories in the Napoleonic Wars. Perhaps the most decisive victory was the one which took his life, the Battle of Trafalgar, the opening of which is described in this object. Despite losing Nelson, British forces ultimately won the battle and maintained their naval dominance over the French and Spanish Navies. Already a national hero before the battle, Nelson’s legacy was further cemented by the victory, and monuments to him can be found throughout the United Kingdom, such as in London’s Trafalgar Square. 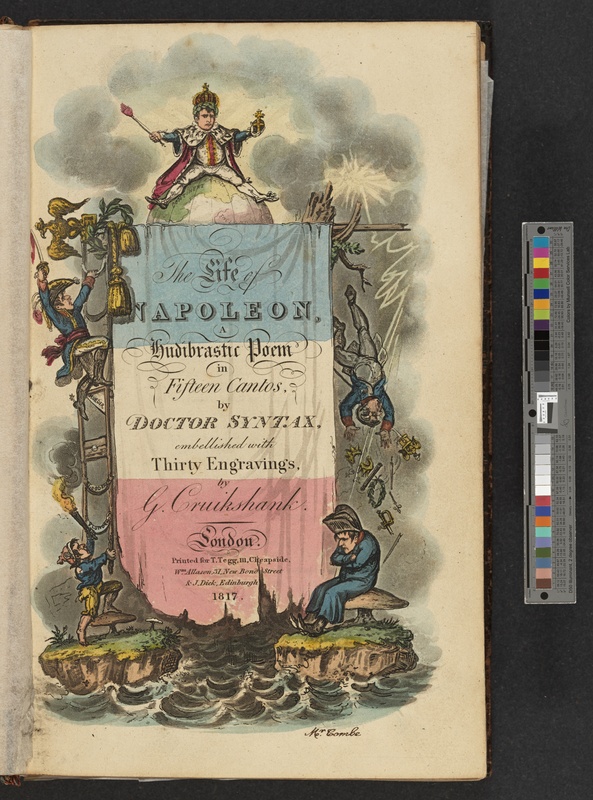 Title page of The life of Napoleon, with allegorical scenes of his life

William Combe is primarily known today for his satiric Doctor Syntax poetry, works which poke fun at figures such as William Gilpin and the penchant for the picturesque in British art of the period. However, he also wrote a biographical poem about Napoleon under the guise of Doctor Syntax. Shown here is the title page of that poem, with an illustration by George Cruikshank. The vignettes allegorically show the rise and fall of Napoleon as he climbs the ranks, literally, to emperor, and ends with his exile to Saint Helena. 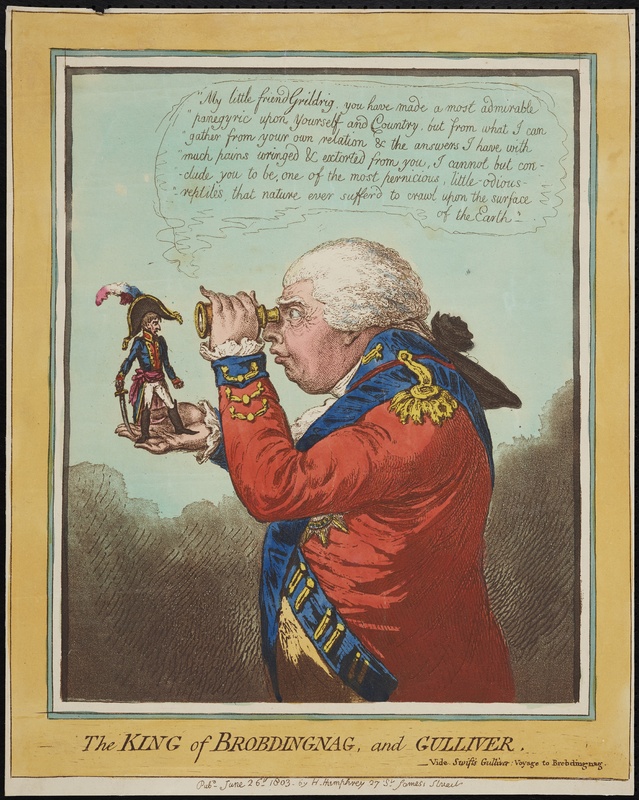 Gilray's cartoon depicting Napoleon as Gulliver, King George as the King of Brobdingnag

Political cartoons and caricatures were quite popular during the Regency period, and James Gilray was a master of the genre. This cartoon plays on the popular 1726 novel Gulliver’s Travels, depicting King George III as the King of Brobdingnag examining Napoleon as Gulliver. The caption in the King’s speech bubble is a parody of the closing line from Part II Chapter VI of Gulliver, but Gillray applies the line to Napoleon, and by extension France, instead of Gulliver (and England) as in the original novel. 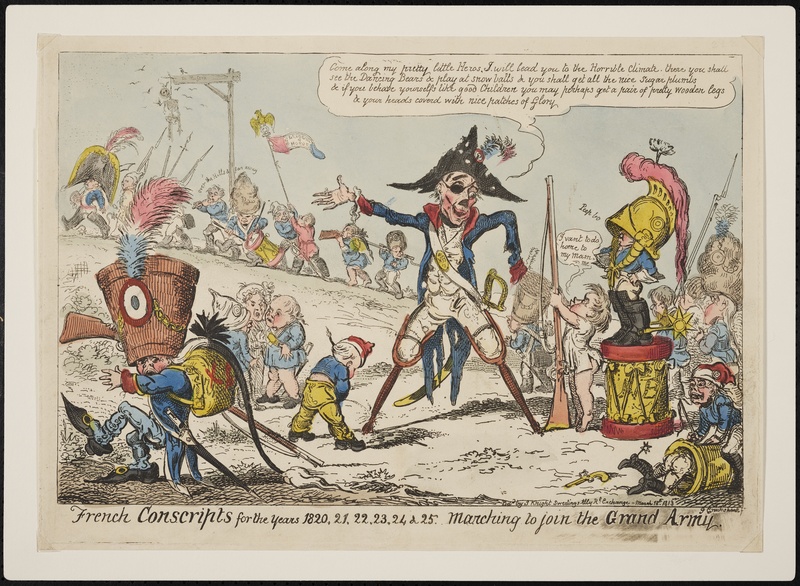 Cruikshank was another pre-eminent British cartoonist and caricaturist, particularly known for his illustrations to the works of Charles Dickens. The illustration depicts a peg-legged and ravaged Napoleon attempting to lure French infants to join the military, and presumably an early grave. Note the span of ten years between this illustration and the Gillray item in this exhibit, and consider the implications of the more horrific tone and imagery in this example. 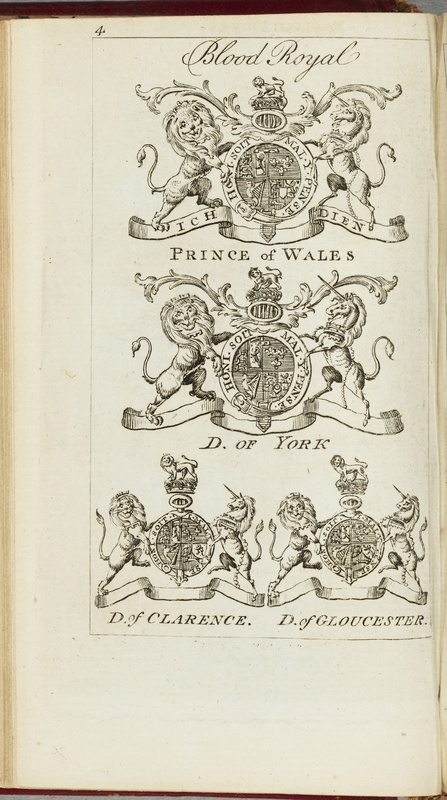 The Royal kalendar for 1797, with the Prince of Wales' (future Prince Regent and George IV) coat of arms at top left

This item is bound together with Rider’s British merlin, Heraldry in miniature, a Compion to the royal Kalendar and the East India calendar, also for the year 1797. These publications were almanacs of sorts, complete with information covering a wide range of topics such as royal lineages, members of Parliament, and market dates and other holidays. The opening is to the section containing the coats of arms for various nobles and royals. The coat of arms of the Prince of Wales is shown at the top of the lefthand page. The Prince in question is specifically the future George IV, who was a fan of Austen’s novels and to whom Austen dedicated Emma while he ruled as the Prince Regent.