Austen was an ambitious professional author. As we know from study of her juvenilia, inclusive of mock title pages and dedications, she had long placed herself and her writings within a professional sphere. This is itself exceptional: the last quarter of the eighteenth century and early decades of the nineteenth century was a period of transformation from which emerged a more contemporary conception of professional authorship. These transformations were prompted, in part, by changes in copyright: in 1774, the Parliamentary case Donaldson v. Beckett ruled to end perpetual copyright and, as a result, out-of-copyright books entered the marketplace, authors became more attentive to their works as intellectual property, and the number of new yearly titles rose from 3,000 to 8,000.

The objects in this section showcase how the early-nineteenth-century shifts in print publication affected Austen. On display is Austen’s first appearance in print—as a subscriber to Frances Burney’s Camilla (1796); an exemplary title from her first publisher, Thomas Egerton, who specialized in military titles rather than domestic fictions; two pages from her first editions, including the title page to Mansfield Park (1814) and the dedication to the Prince Regent in Emma (1815); and an edition of Frankenstein by Colburn and Bentley, the enterprising publishers who brought Austen into the Victorian age with a similarly designed set of low-cost, illustrated editions of her novels. 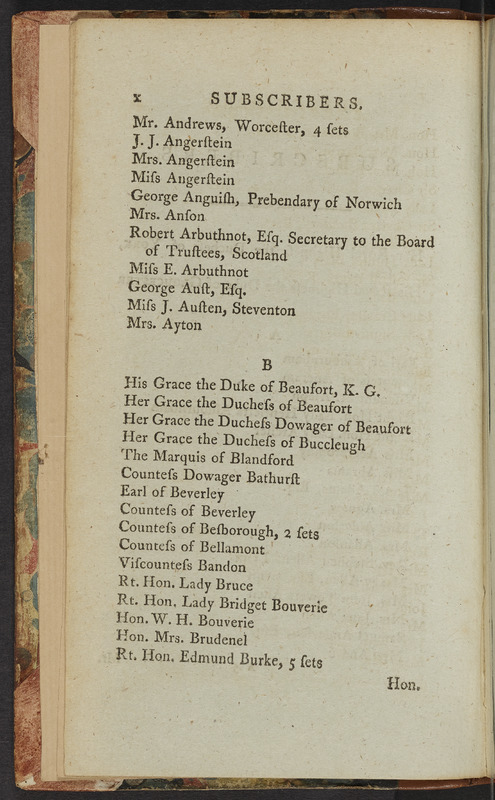 Page from the subscription list to Camilla, listing Austen as a subscriber

The subscription list prefixed to Frances Burney’s social comedy, Camilla (1796), contains what is thought to be Jane Austen’s first appearance in print, recorded as “Miss J. Austen, Steventon.” Subscription publishing was a form of crowdfunding: subscribers paid in advance to support printing costs, and received the book with their name in print in return. Burney is a frequent reference in Austen’s life and works. The first draft of Pride and Prejudice was submitted to (and rejected by) Burney’s publisher, and Northanger Abbey famously references Camilla in its defense of novel reading.

Title page and foldout map from Account of the War in Spain and Portugal, published by Thomas Egerton, Austen's first publisher

Account of the War in Spain and Portugal was published by Austen’s first publisher, Thomas Edgerton. It is an example of the military history books that Edgerton specialized in, and presents an unlikely companion to Austen’s novels. Military conflict, however, was never far from Austen’s purview. In a January 1809 letter, one of several in which she relays military knowledge, she writes to Cassandra about the British Army’s retreat during the Peninsular War. 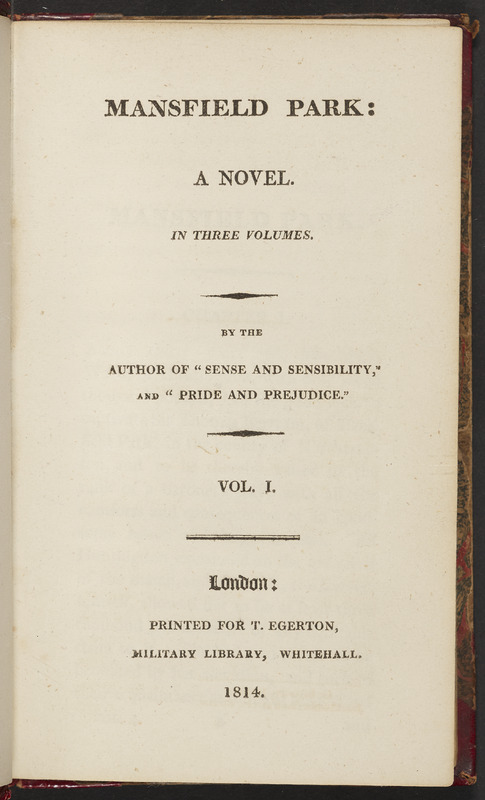 Sense and Sensibility (1811), Pride and Prejudice (1813), and Mansfield Park (1814) were originally published by Thomas Egerton (1784–1830) of the Military Library, Whitehall. Claire Tomalin posits that Austen’s brother Henry may have used his military connections to secure Austen’s first publication with Egerton. Austen shifted to publisher John Murray beginning with the second edition of Mansfield Park. 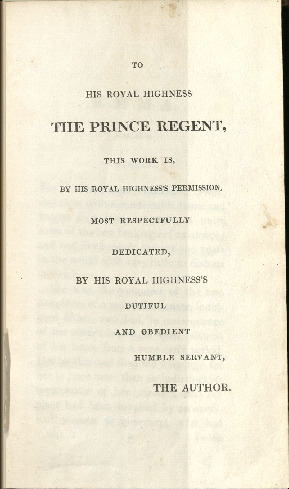 Dedication to the Prince Regent in Emma (1816)

This dedication to England’s Prince Regent, the future King George IV, prefixes the first edition of Emma, and evidences Austen’s growing popularity. The dedication was requested by the Prince’s librarian, James Stanier Clarke. Austen originally drafted a simpler dedication to appear on the title page (“Emma, Dedicated by Permission to H.R.H. The Prince Regent”), but she later tells Murray that the initial text arose “from my ignorance only, and from having never noticed the proper place for a dedication.” 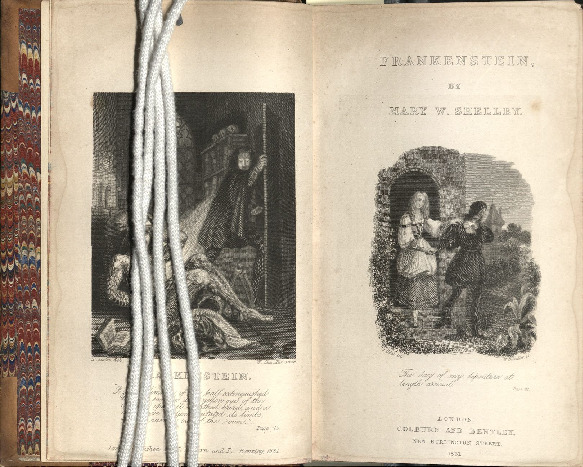 Bentley and Colburn’s Standard Novel Series published the first single-volume, illustrated editions of Austen’s novels. The attractive designs and low cost boosted readership and framed Austen as familial, female-focused, and sensational. A similar emphasis is evident in these frontispiece engravings to the Colburn and Bentley edition of Frankenstein.