Jane Austen's novels are often centered on a home, such as the titular estate Mansfield Park, or the fictional Surrey town Highbury. The family dynamics of parent-children and sibling relationships are key themes in her work, driving some of the conflicts, even. Scenes of family hobbies and entertainment abound, including drawing, sewing, and musical performances. As a result, Austen's novels are often viewed as a window into Regency domestic life, and especially that of women. The items in this gallery have been chosen to reflect some aspects of homelife in Austen's time.

The first item in this collection is a letter written by Romantic poet William Wordsworth which gives us a lens into the personal correspondence and daily minutiae of one of Britain's most famous poets. Another intimate and personalized item in this wing is the commonplace book, a genre similar to a diary, and this example gives insight into the political context of the Napoleonic Wars as well. Two of the items are Books of Common Prayers, liturgical texts of the Anglican Church with which Austen would have been very familiar since her father was a clergyman. The last two items in the collection highlight two domestic pastimes present in Austen's novels and popular in the greater Regency context: dancing and sewing. 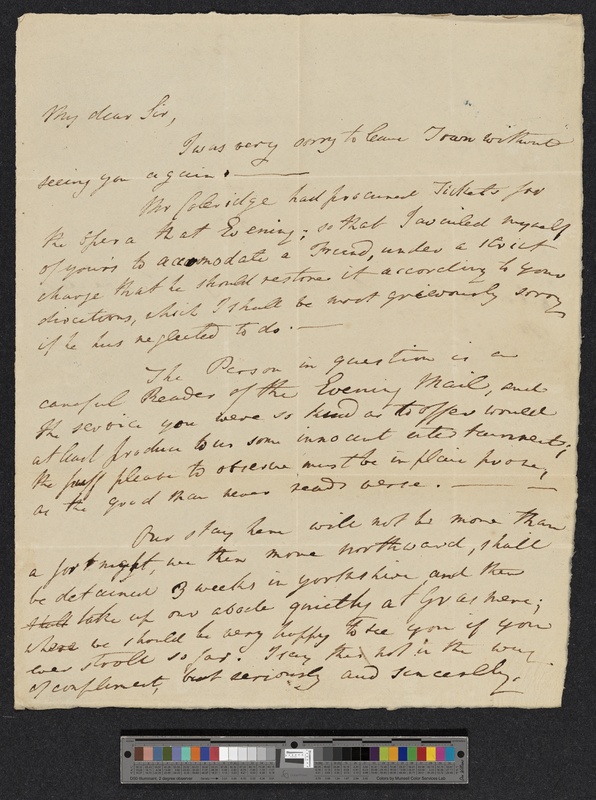 Front page of a manuscript letter from Wiliam Wordsworth to author and journalist John Taylor, 27 May 1807

In this letter to author and journalist John Taylor, the Romantic poet William Wordsworth apologizes for being unable to see Taylor while in town. Personal correspondences, such as this and the letters of Austen, offer invaluable insight into the manner and expression of their famous authors. The letter also helps us see the material cultures of Regency letter-writing: here, rapidity takes the place of Austen's full-sheet letters composed over the course of one or more days. 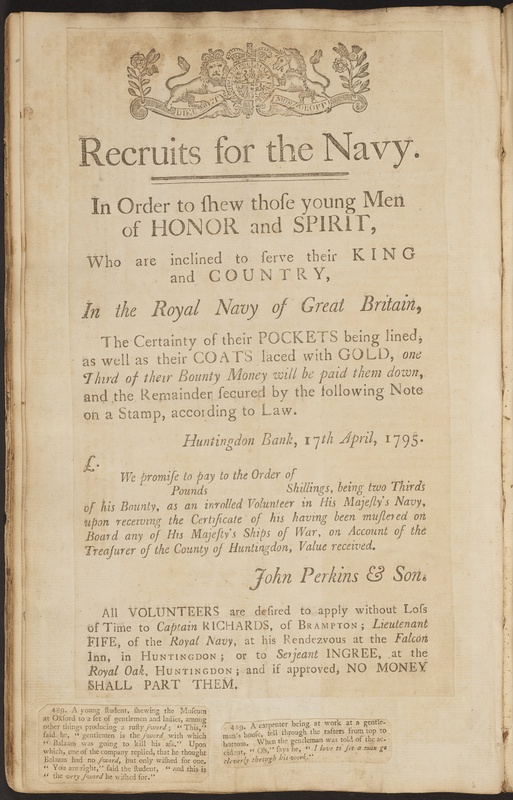 This item is a commonplace book kept from 1769 to 1820. Especially popular in the Renaissance, eighteenth, and nineteenth centuries, commonplace books served as personal archives of sorts. Readers would either handwrite transcriptions of or cut and paste newspaper and magazine clippings of stories poems, or other materials that they found interesting into their books. Here, the commonplace book is opened to a recruitment advertisement for the Royal Navy. Two of Austen’s brothers joined the Royal Navy, and her familiarity with one brother’s service in Britain’s military campaigns served as a basis for the character of Captain Wentworth in Persuasion. 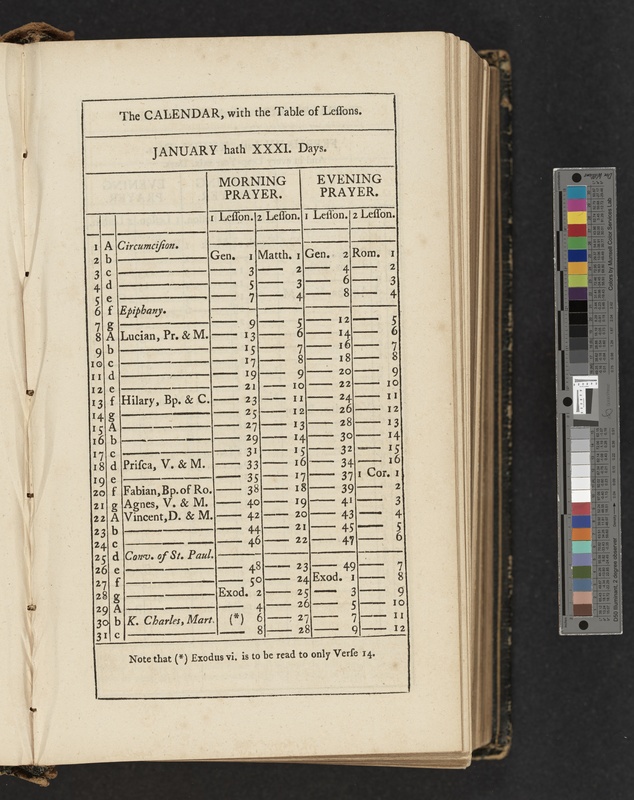 First printed in 1549 after the separation of the Church of England from the Roman Catholic Church, The Book of Common Prayer contains liturgical texts for various services and individual devotion, as well as doctrinal articles. This particular Book is small and was likely a family-use copy for the home. The opening displayed here shows the Bible readings, or “lessons,” for morning and evening prayers for each day of the month, as well as lists holy days and feasts days 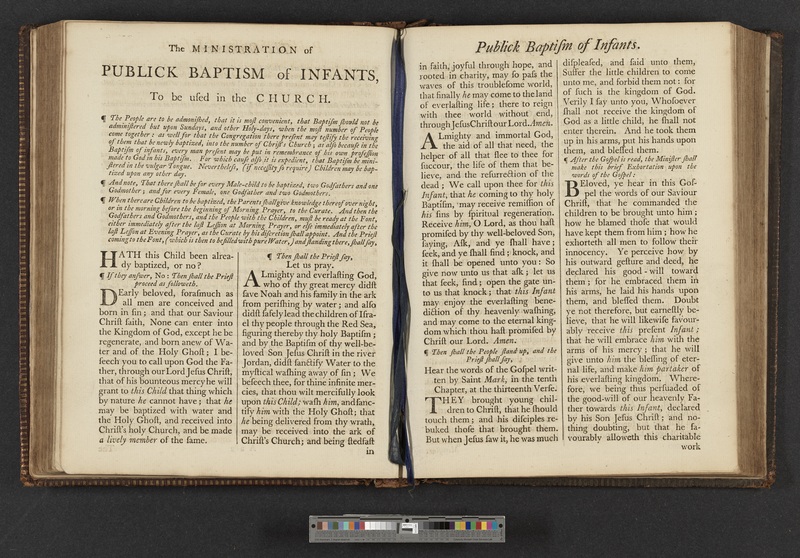 Book of Common Prayer open to the liturgical text for baptisms

CHURCH OF ENGLAND
The Book of Common Prayer
Oxford: W. Jackson and A. Hamilton, 1784

Another Book of Common Prayer, this example is larger than the other Book in this exhibit, and very elaborately bound, and is therefore likely similar to those used by clergy such as Austen’s father. A manuscript note on the flyleaf reads: “Severne Majendie, St. Katherine Royal Chapel.” Majendie (d. 1927) was a Master of the College of St. Katherine’s by the Tower in London. The opening shows the first pages of the liturgical text for the sacrament of baptism of an infant. 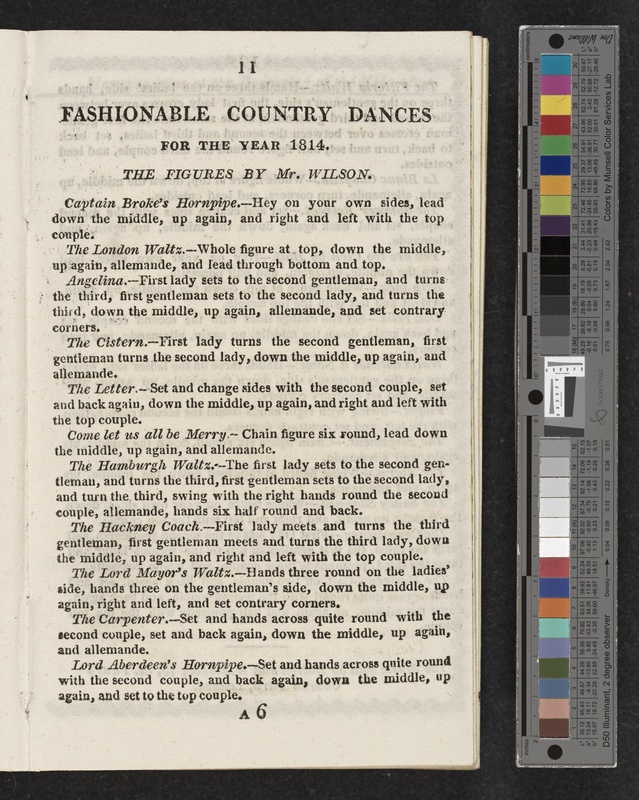 Wayland's annual for 1814, open to an entry describing country dances

This item is one example of a pocket-sized annual publication targeted at an audience of Regency-era women. They contained information about fashion, games, and (as in the opening here) “country dances” popular in the period. Pocket companions also often included blank pages for owners to keep track of their social engagements or day-to-day happenings and use as a diary or journal. This item, once owned by a Mrs. Catherine Wood, née Hodson, has many pages filled with such notes from her daily life. UNC holds many other pocket companions owned by Mrs. Wood in its collections. 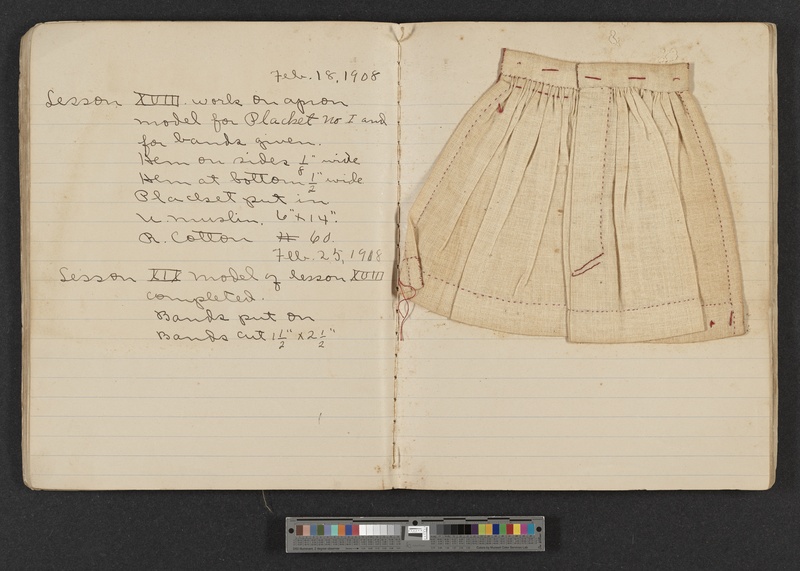 Shown is one entry in Sallie Bell Buford’s sewing notebook, in which she recorded her lessons and practiced her stitching and fabric samples. Included alongside an entry about working on an “apron model” is the product of the lesson itself, with the stiches sewn using red thread. Although this journal comes from some time after Austen’s death, young women of the Regency era often practiced their sewing in a similar manner, through the use of a sampler. Austen discusses sewing in both her letters and novels, so daily needlework would have been as familiar to Austen as it was to Sallie Bell Buford.