The violent Gastonia strike of 1929 can be traced to rising economic and social tensions connected to the textile industry’s accelerating development throughout the South during the late nineteenth and early twentieth centuries. Like so many other regional mills, Gastonia’s Loray Mill was owned by northern businessmen, who had relocated their mills to southern states where labor costs were significantly cheaper than in New England. Textile mills were among the first industrial operations to implement what was called the “stretch-out,” the practice of requiring more work in the same time period without raising (and often reducing) pay. By early 1929, the mill workers’ general frustration and simmering anger with the stretch-out finally erupted in strikes throughout the region.

The work stoppage in Gastonia, in Gaston County, was North Carolina’s most serious. Violence there resulted in the deaths of the chief of police and two textile workers. It also led to the imprisonment of the strike’s leaders, including three women. Following the upheaval in Gastonia, many laborers contended that authorities had framed them and sought to discredit their legitimate grievances by associating them with Communist agitators. Some of the imprisoned leaders were eventually released; but others who were convicted chose to flee the state. The Loray Mill continued to operate, but closed its doors several years later due in part to financial losses it incurred during the deadly strike. In 1935 the Firestone Rubber Company purchased the mill and village. The Firestone Mill closed in 1993. 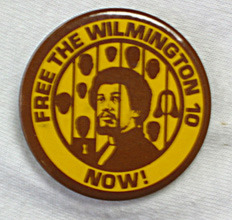 This button refers to an interracial conflict in Wilmington in 1971. Civil Rights activist Ben Chavis (depicted on button) was sent to Wilmington to organize African American students who were protesting discrimination in newly desegregated public schools. A week of racial violence broke out, and a state of emergency was declared. During that week, Mike's Grocery, a white-owned store, was fire-bombed. Although claiming their innocence, Chavis and nine others were arrested for the crime. The convictions prompted protests across the nation, many feeling the group had been framed. In 1981, a year after Chavis was paroled, a federal appeals court overturned the convictions of the "Wilmington 10." 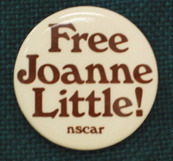 Joanne (or Joan) Little became a rallying point for feminists and criminal justice reformers when she was charged with killing a prison guard with an ice pick in the Beaufort County Jail in 1974. Serving a term for breaking and entering, Little claimed that the guard sexually assaulted her, and that she acted in self-defense. This case made national news, and various groups began collecting money for her defense. Her trial prompted public debate over issues such as sexual abuse of female inmates, legal rights of the poor, and the process of jury selection. Little was acquitted of murder charges in 1975. 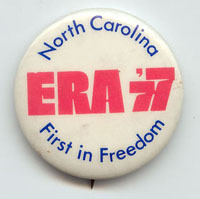 The Equal Rights Amendment (ERA), first proposed in 1923, declared that "equality of rights under the law shall not be denied or abridged by the United States or by any state on account of sex." The ERA was introduced into every session of Congress between 1923 and 1972, when it was finally passed and sent to the states for ratification.

This amendment is still not part of the Constitution, and this political cause button represents the attempt by North Carolinians in 1977 to have the amendment ratified. The General Assembly again refused to ratify ERA that year. In addition to North Carolina, fourteen other states have not ratified: Alabama, Arizona, Arkansas, Florida, Georgia, Illinois, Louisiana, Mississippi, Missouri, Nevada, Oklahoma, South Carolina, Utah, and Virginia. The button plays on North Carolina's claim to being the "First in Freedom," a slogan based on the Mecklenburg Declaration of Independence of 1775. 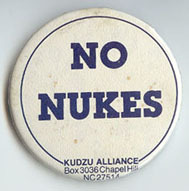 Headquartered in Chapel Hill during the 1980s and 1990s, this environmental group generally opposed the use of nuclear power, whether applied for military purposes or in the production of electricity by public utilities.