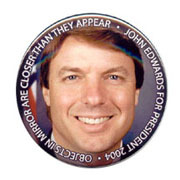 In 2004, North Carolina once again came into the nation's political spotlight when U.S. Senator John Edwards made a bid for the Democratic Party's presidential nomination. The slogan on this button "Objects in the Mirror are Closer Than They Appear," was adopted from a speech made at the Wisconsin primary, and refers to Edward's claim that he was catching up to John Kerry, the frontrunner for the nomination.

In order to understand today’s national party platforms and campaign methods, it is helpful to acquire knowledge about the history of politics on state and local levels. Few realize that the Democratic and Republican parties of a century ago were very different than those of today, or that the use of the campaign slogan itself goes back to the 1840s. 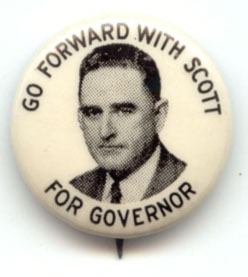 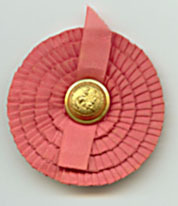 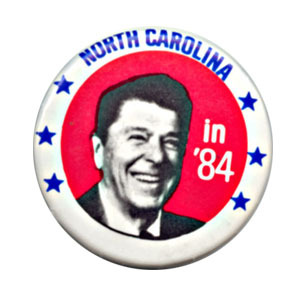 American campaign slogans have at least been used since the election of 1840, when the Whig Party ironically used the image of the log cabin and hard cider to advertise their upper-class candidate, William Henry Harrison. In American Political Ribbons and Ribbon Badges, 1825 to 1981, Edmund Sullivan and Roger Fischer state that these Harrison icons were “the first truly successful examples of symbolism in American political popular culture.” Log cabins and cider barrels adorned a variety of memorabilia, including bandanas, belt buckles, ceramic dinnerware, clothing buttons, drinking glasses, jewelry, metal tokens, ribbons, and spoons.

In Europe, the wearing of decorative devices dates to at least the Middle Ages when citizens donned colored ribbons to indicate political viewpoints. French Revolutionaries later used tri-colored cockade ribbons to show support for the Revolution. In the United States, during the competition between Thomas Jefferson's Democratic-Republicans and the Federalists, brightly colored scraps of ribbon were worn as political badges. Other items of varying quality were produced in honor of leaders or to show political preference. With the advent of the textile printing process, it was possible to put a candidate’s likeness on these ribbons. In 1860, the ferrotype photographic process made it possible to attach an actual photograph to the ribbon. Now it was possible for voters across the nation to see what their favorite candidate looked like.

During the 1896 presidential campaign between William McKinley and William Jennings Bryan, less expensive celluloid buttons became widely used, often being added to ribbons. Though small and seemingly insignificant, the stories behind these buttons are invaluable to an understanding of North Carolina political campaigns.