Furnifold Simmons (1854-1940) served in the United States Senate for thirty years where he was among the leaders who helped to establish the Intracoastal Waterway. Nicknamed "The Great White Father," Simmons was a segregationist who helped lead the white supremacy campaigns of 1898 and 1900. In those campaigns, Democrats broke the Republican-Populist coalition that had gained power in North Carolina politics. Simmons was effectively North Carolina's "political boss" during the first three decades of the twentieth century, constructing an organization that became known as the Simmons Machine. 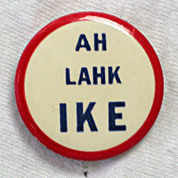 A "Southern" version of the popular slogan "I Like Ike." Republican Dwight D. Eisenhower was elected president during a time when faith in the American dream and a fascination with pop culture were on the rise. Large numbers of American women voted during this period, and the woman's vote was eagerly sought. Paraphernalia such as "I Like Ike" stockings, telephones, and jewelry could be purchased. One could even buy a 'Mamie' (Mrs. Eisenhower) tape dispenser. 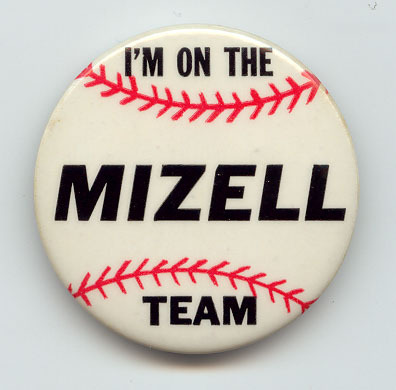 Wilmer "Vinegar Bend" Mizell pitched for the Pittsburgh Pirates, New York Mets, and St. Louis Cardinals. Although an Alabama native, Mizell moved to Midway, North Carolina, in Davidson County, after retiring from baseball and ran for Congress, serving from 1969 to 1973. He also served in the Ford, Reagan, and Bush presidential administrations. 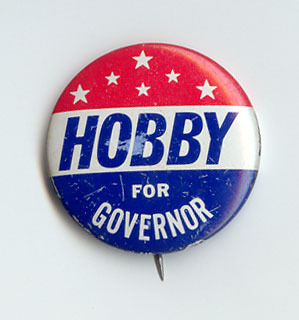 Having grown up as part of a single- parent, working-class family in east Durham, Wilbur Hobby empathized with the plight of those who struggled daily on low incomes. Hobby became a union organizer and a Civil Rights and Democratic Party activist, as well as president of the AFL-CIO. This button dates from Hobby's failed bid for the North Carolina Democratic gubernatorial nomination in 1972. In 1981, he was removed from his position in the AFL-CIO, after being found guilty of fraud and conspiracy to misuse federal job training funds. 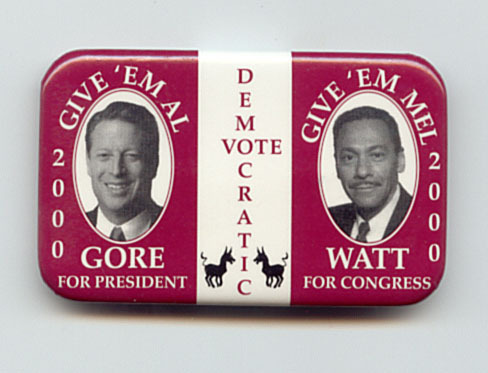 Charlotte lawyer and businessman Melvin Watt served a term in the North Carolina Senate (1985-1986) where he was called "the conscience of the senate." In 1992 Watt was elected to the US House of Representatives and became one of only two African Americans elected to Congress from North Carolina in the twentieth century. This button is an example of a "coattail." The "coattail effect" presumes that the popularity of a political party leader will attract votes for other candidates of the same party. In this case, Watt was elected, Gore was not. 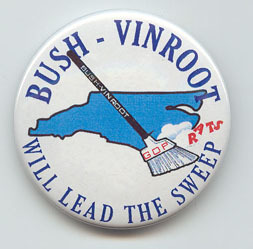 Another "coattail" (see Gore and Watt button), this button features a broom, an image used to promote political reform or a "clean sweep" of government. This button is from the North Carolina 2000 gubernatorial race between Democrat Mike Easley and Republican Richard Vinroot, in which Easley prevailed. Both candidates brought a new style of campaigning to the race, focusing on fund-raising and television advertising. 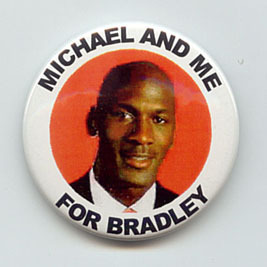 Although generally perceived as nonpolitical, basketball legend and native North Carolinian Michael Jordan made an exception for fellow NBA alumnus Bill Bradley, who vied for the Democratic presidential nomination in 2000.