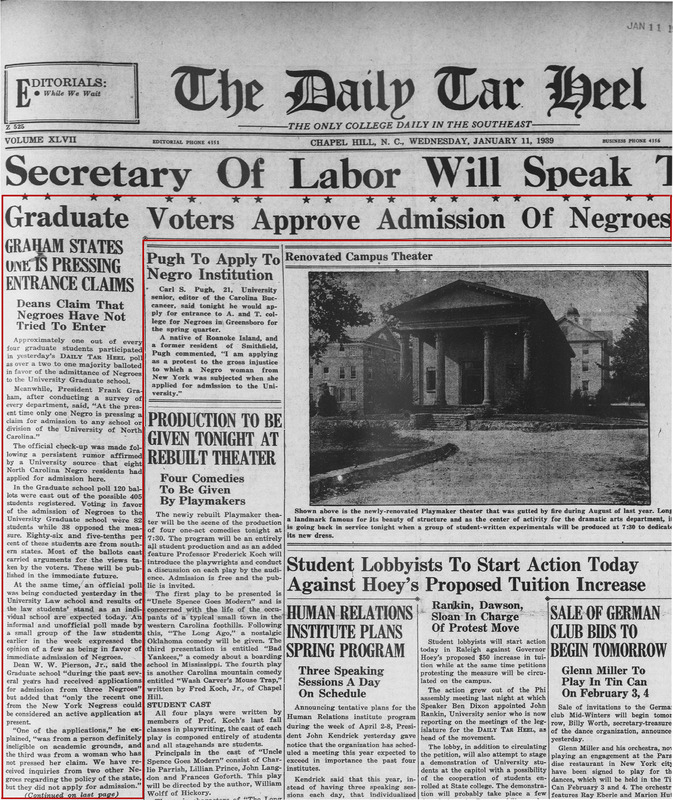 The Daily Tar Heel
The Only College Daily in the Southeast
Volume XLVII
Editorial Phone 4351
Chapel Hill, N.C., Wednesday, January 11, 1939
Business Phone 4356
Graduate Voters Approve Admission Of Negroes
Graham States One is Pressing Entrance Claims
Deans Claim That Negroes Have Not Tried to Enter
Approximately one out of every four graduates students participated in yesterday’s DAILY TAR HEEL poll as over a two to one majority balloted in favor of the admittance of Negroes to the University Graduate school.
Meanwhile, President Frank Graham, after conducting a survey of every department, said, “At the present time only one Negro is pressing a claim for admission to any school or division of the University of North Carolina.”
The official check-up was made following a persistent rumor affirmed by a University source that eight North Carolina Negro residents had applied for admission here.
In the Graduate school poll 120 ballots were cast out of the possible 405 students registered. Voting in favor of the admission of Negroes to the University Graduate school were 82 students while 38 opposed the measure. Eight-six and five-tenths percent of these students are from southern states. Most of the ballots cast carried arguments for the views taken by the voters. These will be published in the immediate future.
At the same time, an official poll was being conducted yesterday in the University Law school and results of the law students’ stand as an individual school are expected today. An informal and unofficial poll made by a small group of the law students earlier in the week expressed the opinion of a few as being in favor of the immediate admission of Negroes.
Dean W.W. Pierson, Jr., said the Graduate school “during the past several years had received applications for admission from three Negroes” but added that “only the recent one from the New York Negress could be considered an active application at present.
“One of the applications,” he explained, “was from a person definitely ineligible on academic grounds, and the third was from a woman who has not pressed her claim. We have received inquiries from two other Negroes regarding the policy of the state, but they did not apply for admission.”
(Continued on last page)