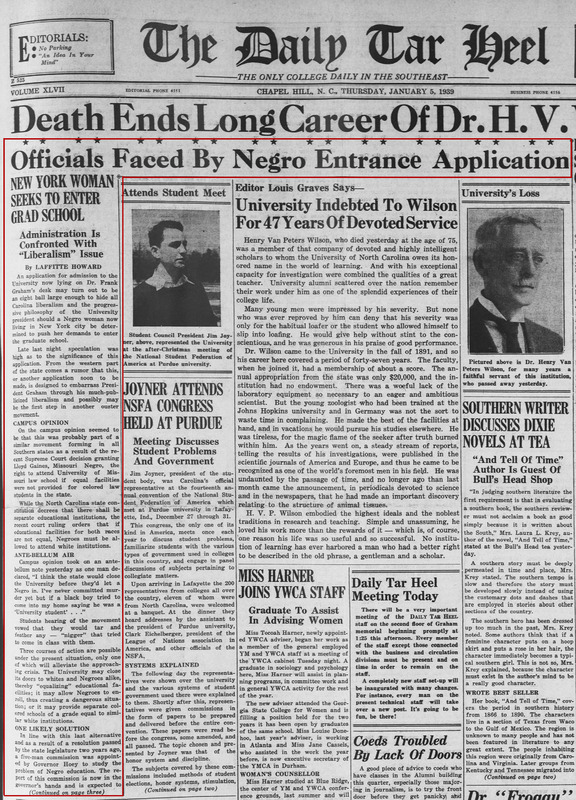 The Daily Tar Heel
The Only College Daily in the Southeast
Volume XLVII
Editorial Phone 4351
Chapel Hill, N.C., Thursday, January 5, 1939
Business Phone 4356
Officials Face By Negro Entrance Application
New York Woman Seeks to Enter Grad School
Administration Is Confronted With “Liberalism” Issue
By Laffitte Howard
An application for admission to the University now lying on Dr. Frank Graham’s desk may turn out to be an eight ball large enough to hide all Carolina liberalism and the progressive philosophy of the University president should a Negro woman now living in New York city be determined to push her demands to enter the graduate school.
Late last night speculation was high as to the significance of this application. From the western part of the state comes a rumor that this, or another application soon to be made, is designed to embarrass President Graham through his much-publicized liberalism and possibly may be the first step in another ouster movement.
CAMPUS OPINION
On the campus opinion seemed to be that this was probably part of a similar movement forming in all Southern states as a result of the recent Supreme Court decision granting Lloyd Gaines, Missouri Negro, the right to attend University of Missouri law school if equal facilities were not provided for colored law students in the state.
While the North Carolina state constitution decrees that there shall be separate educational institutions, the recent court ruling orders that if educational facilities for both races are not equal, Negros must be allowed to attend white institutions.
ANTE-BELLUM AIR
Campus opinion took on an antebellum note yesterday as one man declared, “I think the state would close the University before they’d let a Negro in. I’ve never committed murder yet but if a black boy tried to come into my home saying he was a ‘University student’…”
Students hearing of the movement vowed that they would tar and feather any – “[racial slur]” that tried to come in class with them.
Three courses of action are possible under the present situation, only one of which will alleviate the approaching crisis. The University may close its doors to whites and Negros alike thereby “equalizing” educational facilities; it may allow Negroes to enroll, thus creating a dangerous situation; or it may provide separate colored schools of a grade equal to similar white institutions.
ONE LIKELY SOLUTION
In line with this last alternative and as result of a resolution passed by the state legislature two years ago, a five-man commission was appointed by Governor Hoey to study the problem of Negro education. The report of this commission is now in the governor’s hands and is expected to
(Continue on page three)