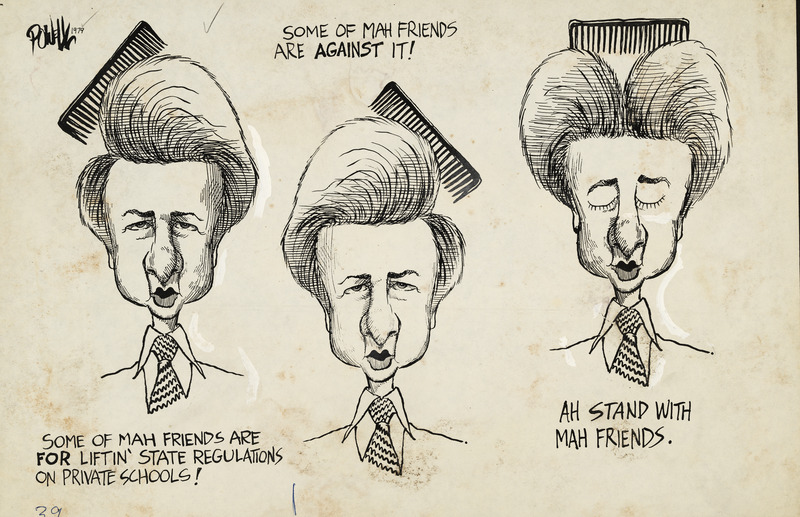 Ah man stands with mah friends, 1979: Powell depicts Jim Hunt, the longest serving governor in North Carolina history, with his signature pompadour with a comb. The cartoon satirizes Hunt’s ambiguous public stances on several issues prior to his re-election in 1980. Some North Carolina politicians rejected his initiative on education, opposing secular approach of teaching children and the excessive administration of schools by state bureaucracies. Hunt eventually won reelection by blending a North Carolina progressive agenda with some conservative measures. 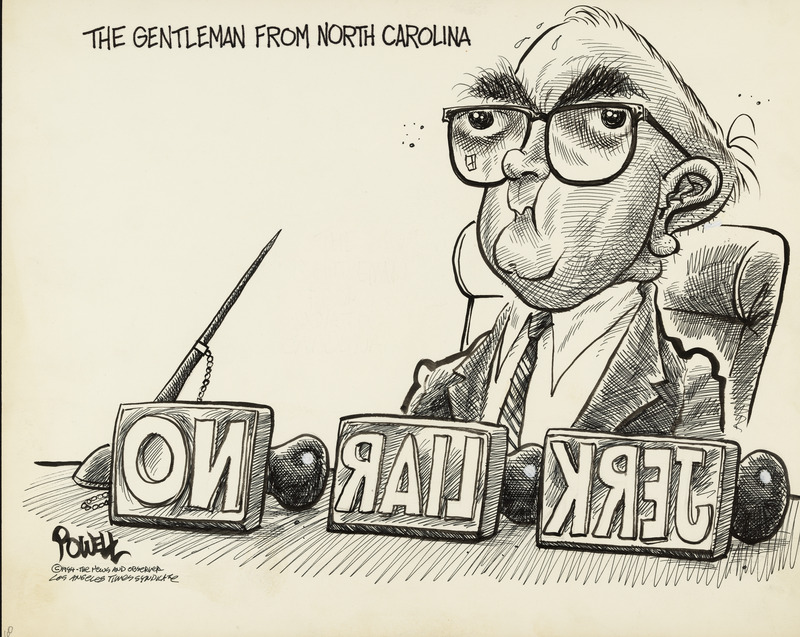 The gentleman from North Carolina, November 1, 1984: Jesse Helms, a five-term Republican Senator (1973-2003) from North Carolina and leader of the 1970s conservative movement, is often portrayed in Powell’s cartoons. Nicknamed “Senator No,” due to his opposition of many political issues of his day, including abortion, homosexuality, affirmative action, communism, liberalism, tax increases, the Food Stamp Program, court-ordered busing to desegregate schools, and arts funding. 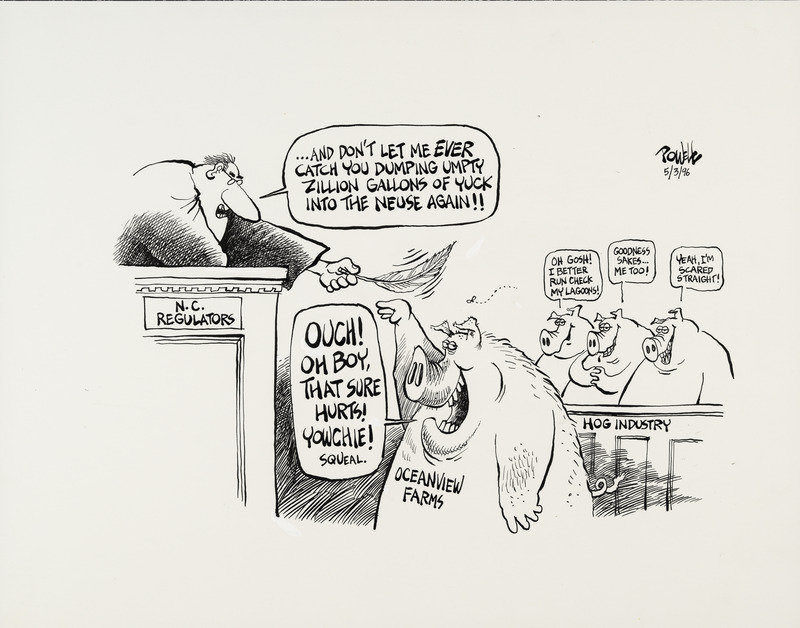 “… And don’t let me ever catch you dumping umpty zillion gallons of yuck into the Neuse again!!!” May 3, 1996: In June 1995, Oceanview Farms, a hog farm in Onslow County, North Carolina, experienced the worst hog-waste spill in state history, causing 25 million gallons of waste to spill into the New River. In October 1995, environmental groups blamed hog industry waste on the deaths of over 10 million fish in the Neuse River. The News and Observer became the 1996 Pulitzer Prize Winner in Public Service for the reporting of Melanie Sill, Pat Stith and Joby Warrick on the environmental and health risks of waste disposal systems used in North Carolina's growing hog industry. 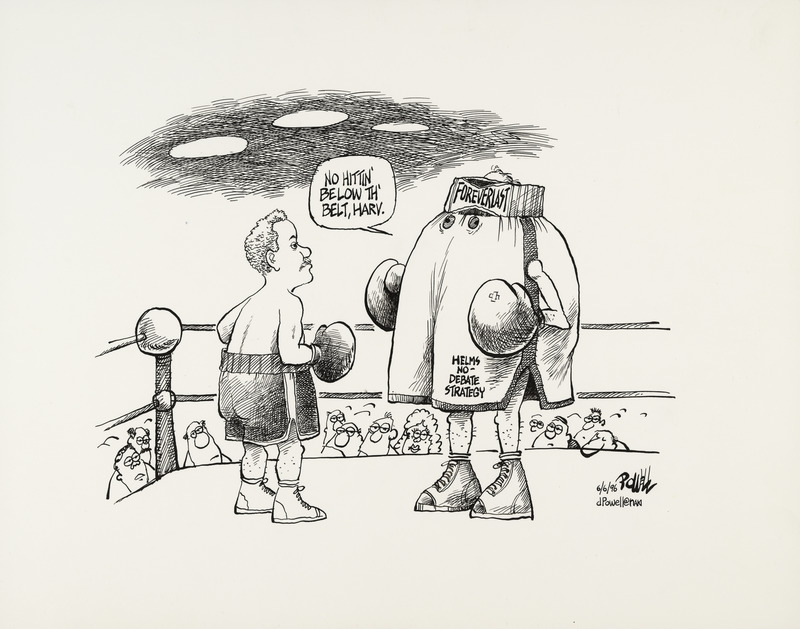 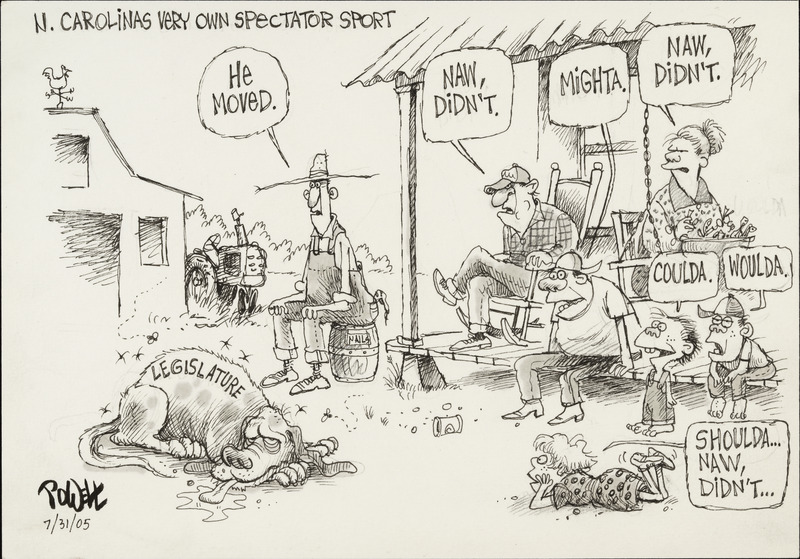 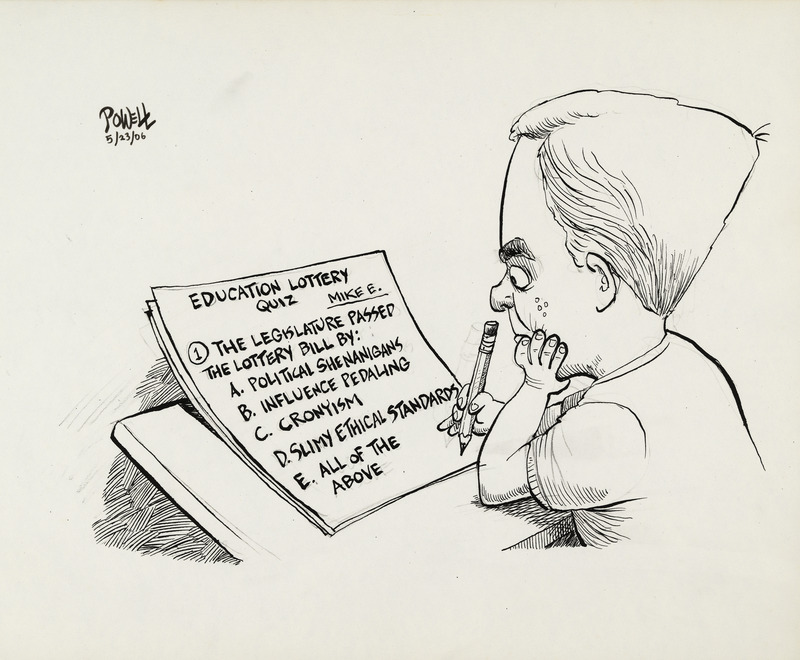 Education lottery quiz, May 23, 2006: In 2005, North Carolina Education Lottery (NCEL), when Governor Mike Easley signed the North Carolina State Lottery Act. The NCEL was controversial, as a majority of state senators opposed the lottery at the time. However, when two opposing senators were absent, the Democratic-majority Senate leaders called for a special vote, which ended in a 24-24 tie. Lt. Governor Beverly Perdue cast the deciding vote as president of the Senate. 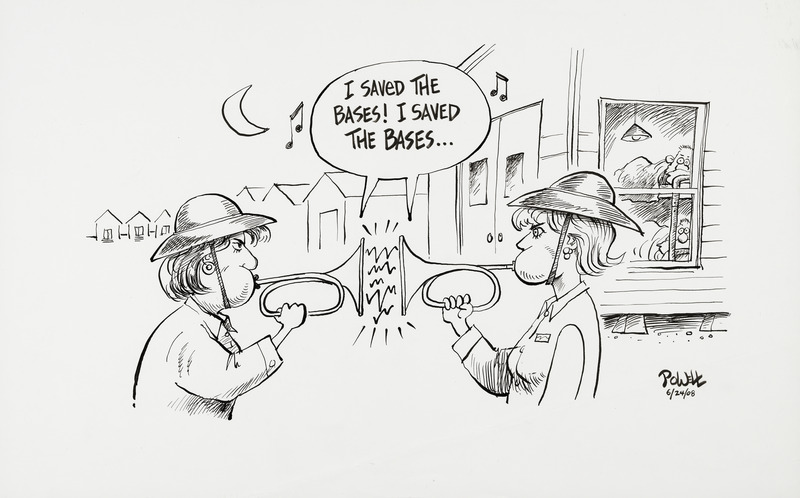 “I saved the bases! I saved the bases…” June 24, 2008: Both Elizabeth Dole and Bev Perdue ran under the claim that they saved military based across North Carolina from closure during their respective 2008 political campaigns. Perdue ultimately won her campaign, as she was elected as the first female governor of North Carolina, while Dole lost her, losing re-election to the U.S. Senate. 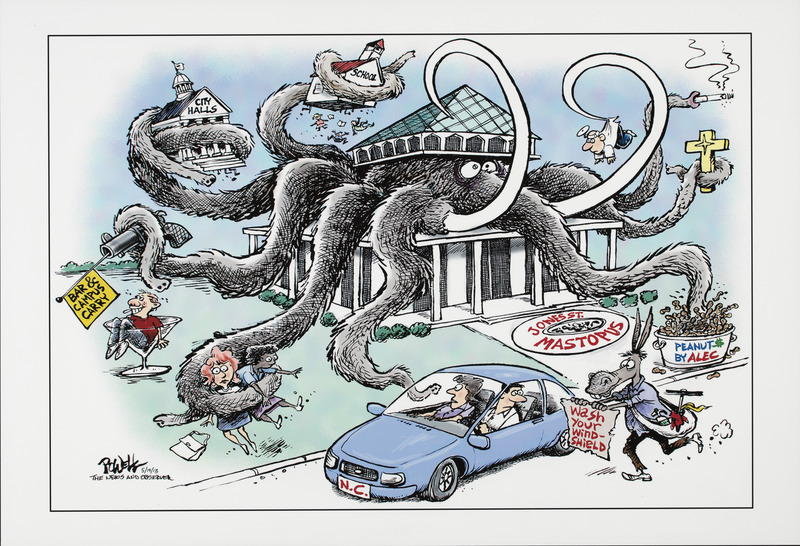 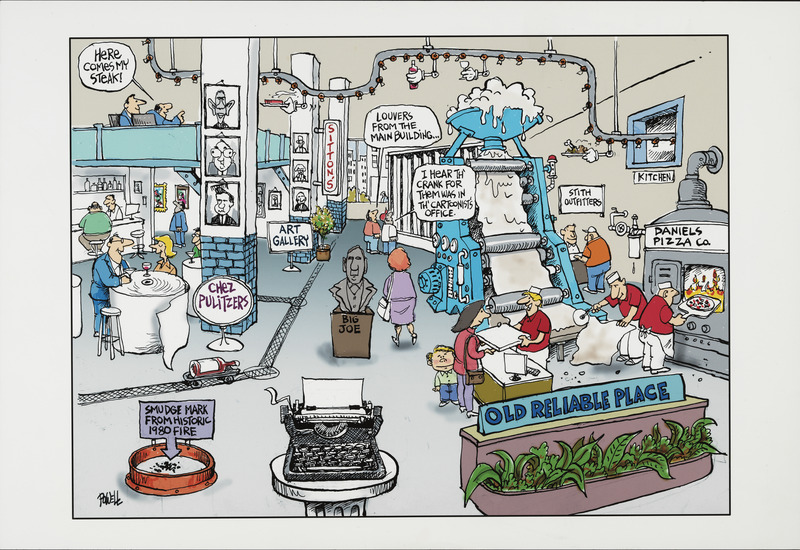 Old Reliable Place, circa 2015: Powell depicts the long-time headquarters of the News and Observer, nicknamed “The Old Reliable,” in downtown Raleigh. In 2015, the newspaper announced its headquarters relocation due to rising costs of downtown real estate. 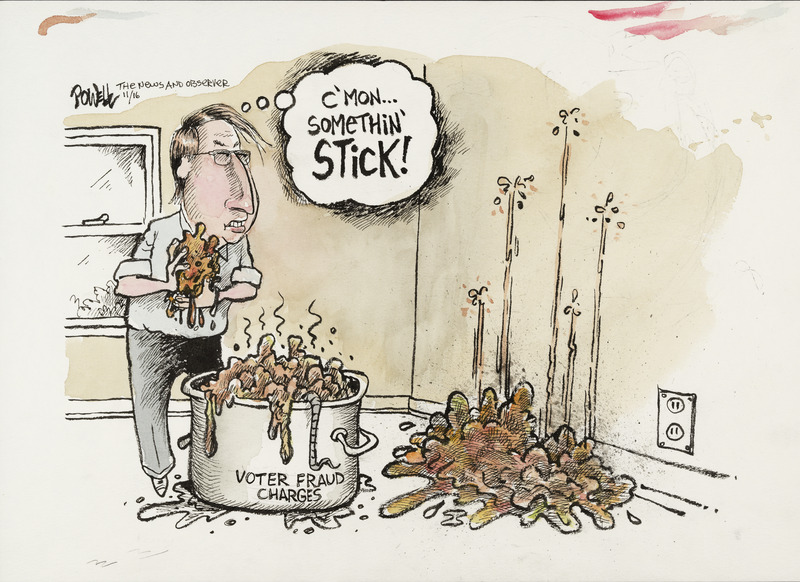 C’mon… somethin’ stick!, November 2016: Pat McCrory, incumbent Republican governor of North Carolina, attempted to use an accusation of voter fraud to hold on to his office after losing by less than 10,000 votes to Pat McCrory in the 2016 North Carolina gubernatorial election. McCrory alleged improper vote counting and the votes of the deceased and felons swung the vote for Cooper. Officials refuted this claim, stating there were no irregularities in the counting process.On December 5, 2016, McCrory conceded the race to Cooper. 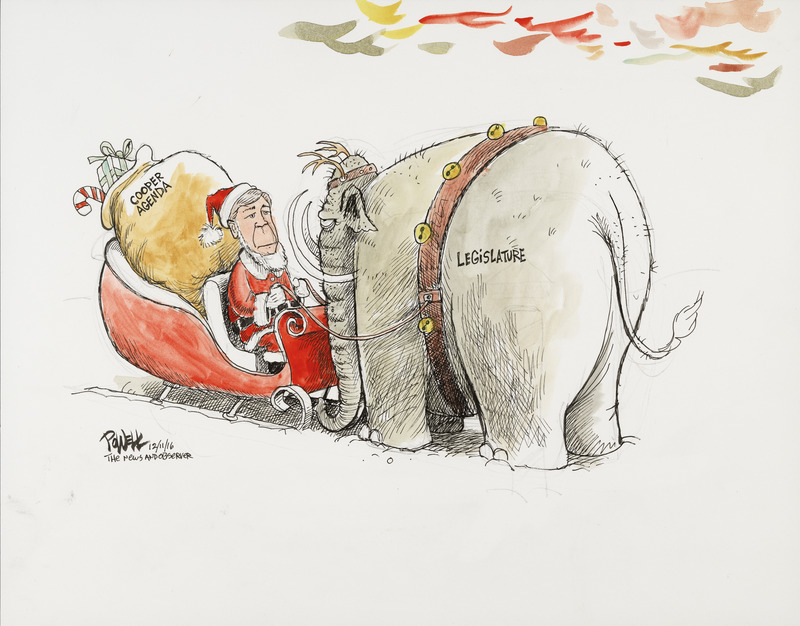 Cooper’s agenda vs. the legislature, December 11, 2016: Following his election in November 2016, North Carolina’s Governor Roy Cooper faced significant roadblocks from Republican lawmakers. In an emergency meeting, Republican lawmakers passed laws that decreased the incoming Democratic governor’s power. These laws reduced the number of positions the governor could appoint from 1,500 to 400, while transferring control over elements of state education and information technology systems away from the governor. The laws also mandated that all state cabinet appointments be approved by the N.C. Senate, a condition that had not been in place in the state before.