From Slavery to the Priesthood 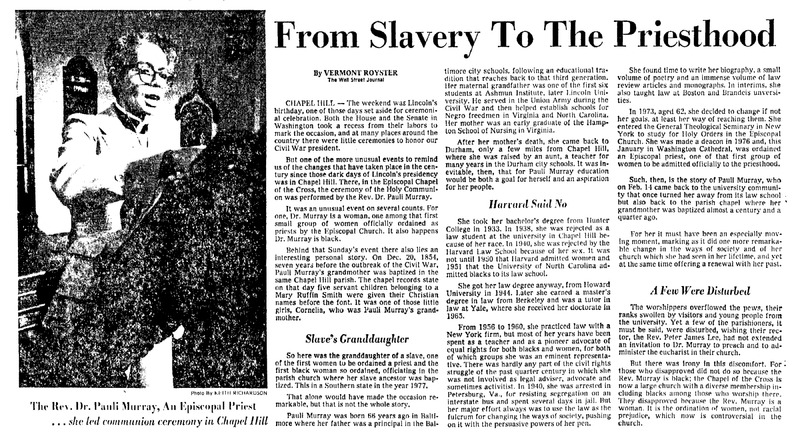 From Slavery to the Priesthood

From Slavery To The Priesthood

CHAPEL HILL — The weekend was Lincoln's birthday, one of those days set aside for ceremonial celebration. Both the Mouse and the Senate in Washington look a recess from their labors to mark the occasion, and at many places around the country there were little ceremonies to honor our Civil War president.

But one of the more unusual events to remind us of the changes that have taken place in the century since those dark days of Lincoln's presidency was In Chapel Hill. There, in the Episcopal Chapel of the Cross, the ceremony of the Holy Communion was performed by the Rev. Dr. Pauli Murray.

It was an unusual event on several counts. For one, Dr. Murray is a woman, one among that first small group of women officially ordained as priests by the Episcopal Church. It also happen Dr. Murray is black.

Behind that Sunday's event there also lies an interesting personal story. On Dec. 20, 1854, seven years before the outbreak of the Civil War, Pauli Murray's grandmother was baptized in the same Chapel Hill parish. The chapel records state on that day five servant children belonging to a Mary Ruffin Smith were given their Christian names before the font. It was one of those little girls, Cornelia, who was Pauli Murray’s grandmother.

So here was the granddaughter of a slave, one of the first women to be ordained a priest and the first black woman so ordained, officiating in the parish church where her slave ancestor was baptized. This in a Southern state in the year 1977.

That alone would have made the occasion remarkable, but that is not the whole story.

Pauli Murray was born 66 years ago in Baltimore where her father was a principal in the Baltimore city schools, following an educational tradition that reaches hack to that third generation. Her maternal grandfather was one of the first six students at Ashmun Institute, later Lincoln University. He served in the Union Army during the Civil War and then helped establish schools for Negro freedmen in Virginia and North Carolina. Her mother was an early graduate of the Hampton School of Nursing in Virginia.

After her mother’s death, she came back to Durham, only a few miles from Chapel Hill, where she was raised by an aunt, a teacher for many years in the Durham city schools. It was inevitable, then, that for Pauli Murray education would be both a goal for herself and an aspiration for her people.

She got her law degree anyway, from Howard University in 1944. Later she earned a master’s degree in law from Berkeley and was a tutor in law at Yale, where she received her doctorate in 1965.

From 1956 to 1960, she practiced law with a New York firm, but most of her years have been spent as a teacher and as a pioneer advocate of equal rights for both blacks and women, for both of which groups she was an eminent representative. There was hardly any part of the civil rights struggle of the past quarter century in which she was not Involved as legal adviser, advocate and sometimes activist. In 1940, she was arrested in Petersburg, Va., for resisting segregation on an interstate bus and spent several days in jail. But her major effort always was to use the law as the fulcrum for changing the ways of society, pushing on it with the persuasive powers of her pen.

She found time to write her biography, a small volume of poetry and an immense volume of law review articles and monographs. In interims, she also taught law at Boston and Brandeis unversities.

In 1973, aged 62, she decided to change if not her goals, at least her way of reaching them. She entered the General Theological Seminary in New York to study for Holy Orders in the Episcopal Church. She was made a deacon in 1976 and, this January in Washington Cathedral, was ordained an Episcopal priest, one of that first group of women to be admitted officially to the priesthood.

Such, then, is the story of Pauli Murray, who on Feb. 11 came back to the university community that once turned her away from its law school but also back to the parish chapel where her grandmother was baptized almost a century and a quarter ago.

For her it must have been an especially moving moment, marking as it did one more remarkable change in the ways of society and of her church which she had seen in her lifetime, and yet at the same lime offering a renewal with her past.

A Few Were Disturbed

The worshippers overflowed the pews, their ranks swollen by visitors and young people from the university. Yet a few of the parishioners, it must be said, were disturbed, wishing their rector, the Rev. Peter James Lee, had not extended an invitation to Dr. Murray to preach and to administer the eucharist in their church.

But there was irony in this discomfort. For those who disapproved did not do so because the Rev. Murray is black; the Chapel of the Cross is now a large church with a diverse membership including blacks among those who worship there. They disapproved because the Rev. Murray is a woman. It is the ordination of women, not racial prejudice, which now is controversial in the church.